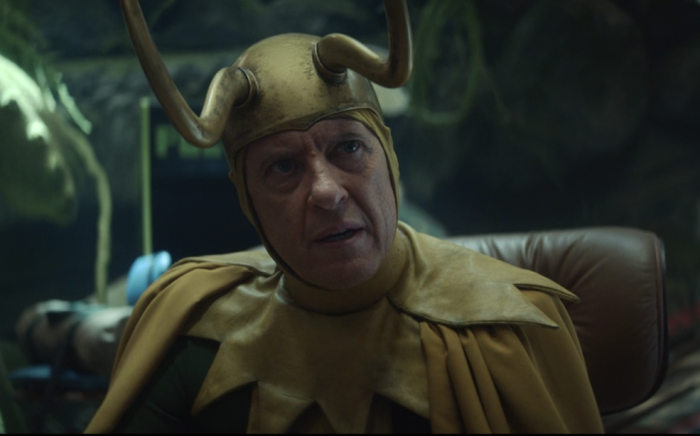 Before we dig into this week’s episode of Loki, I wanted to address something I’ve been meaning to bring up for weeks now: The costumes! You’ve probably seen this tweet from Sylvie star Sophia Di Martino, highlighting the thoughtful work that costume designer Christine Wada put into making a nursing-friendly costume for a new mother:

It’s not easy being a working Mama! Genius #christinewada designed Sylvie’s costume & added concealed zippers so I could pump easily & nurse my baby between takes. Little (big) things like this that made it possible for me to do my job & be a parent. I’m forever grateful 💖 pic.twitter.com/nn0d8HYrFi

Most of the time all we hear about spandex superhero outfits is how hard they are to pee in, and that’s setting aside the rarity of any workplace embracing the demands of motherhood. Still, this is ultimately a story of the hidden ingenuity of the costume for behind-the-scenes practicality, and I think Wada deserves a fresh round of applause for the work we actually get to see on camera each week. This week alone I wanted to hug the genius who gave Richard E. Grant not only a pitch-perfect recreation of the original Loki look but also made sure it featured a cape that just begged to be swished dramatically (Grant, of course, knew exactly how to work it). More than anything, though, Christine Wada achieved with two simple seams something that no MCU film had yet managed…

She made Tom Hiddleston hot AF. 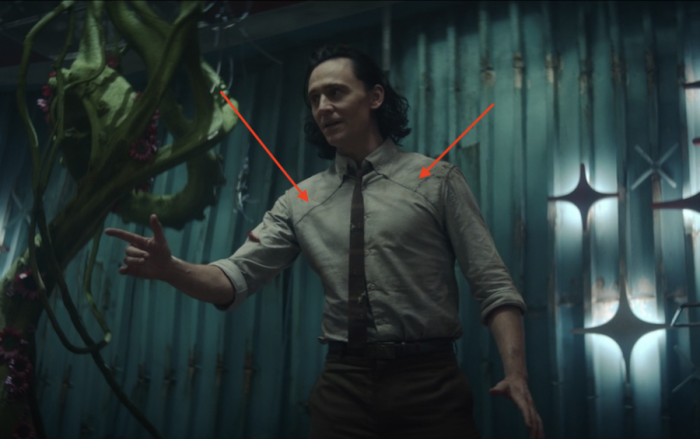 I’m not saying Hiddleston doesn’t bring plenty of heat to the table on his own, but no amount of posing and dagger-twirling and smirks could compare to what Wada created for him with that boring, banal TVA drone get-up. The key feature is the shoulders, where the points of the collar somehow extend into the armpits like a harness, accentuating an asset I had never even noticed before. Seriously, dude has shoulders for DAYS! I’d hang off those man-branches by my teeth if I could! He’s even giving Henry from Kung Fu a run for his money, and that’s saying something considering Henry was literally introduced in a muscle tank (to my DELIGHT). If Loki is ultimately about whether the longtime villain can ever be anything close to a hero, then Wada has offered up a compelling yet understated hero makeover to go with the theme.

Phew. Sorry, I just needed to get that thirst off my chest. Moving on! Episode 5, titled “Journey Into Mystery”, was rife with easter eggs — starting with the title, which was the name of the comic series that introduced Thor, and later Loki, to the Marvel universe. For every Frog Thor (THROG!) I spotted there were at least three other sight gags that sailed over my head (THANOS COPTER!), so I’ll defer to this nifty Nerdist round-up if you’re curious. The main takeaway is that an awful lot of the references seemed to point obliquely to… Kang the Conqueror. Whether that’s a hint at what lies ahead in the finale, or it’s all just another red Mephisto herring, we’ll have to wait a week to find out. Though for the record, I’m hoping they don’t drop Jonathan Majors-as-Kang into the Loki finale. I’m not saying that I wouldn’t like to see him, and it certainly wouldn’t be unheard of for Marvel to seed in the upcoming Ant-Man and the Wasp: Quantumania villain early, but from a storytelling point of view I think it would be the wrong move.

Loki, like WandaVision and (to a far lesser extent) The Falcon and the Winter Soldier before it, has found its greatest strength in exploring the inner workings of a lower-tier character and in doing so, set that character up to be a major player in the MCU moving forward. Also like WandaVision, Loki has done that almost therapeutically. Where Wanda was processing her grief by creating the life she wished she had, Loki has been facing his disappointment with his life — and his disillusionment with himself — by literally facing the versions of himself that time forgot. When that bucketload-of-Lokis gimmick came to its natural chaotic conclusion this week, as Loki found himself stranded in the Void at the end of time with all the other variants that the TVA had pruned, it somehow didn’t feel like a gimmick at all. The whole premise came sharply into focus in one scene in particular: The “Vote Loki” battle. Our Loki was led back to a bunker by Classic Loki, Kid Loki, Boastful Loki and Alligator Loki, only for a mob of other Lokis, led by the aforementioned politician Loki, to descend. Turns out that Boastful Loki sold them out in exchange for… it doesn’t even matter. And then Vote Loki reneged on his word, because of course he did. Lying and backstabbing is the Loki way. So the two groups fight — but in the background, our Loki is cringing. He knows exactly how all of this futile and stupid posturing will pan out, so he does not engage. Loki has had to confront the fact that his “destiny” is often to fail, but really it isn’t destiny at all. It’s self-destruction. The difference is that this time, he had front-row seats to the most literal manifestation of self-destruction ever. He is is own worst enemy.

Episode five, and the series as a whole, has used these variant Lokis to teach our Loki about himself — not to lock him into one version of the truth but to show him that there IS no one version of the truth. Each Nexus Event that got a Loki pruned marked a telling departure, from Kid Loki successfully killing Thor early on to Classic Loki tricking Thanos with an illusion and surviving the events of Infinity War. Whether or not what he feels for Sylvie is “LOVE”-love or just puppy-dog admiration, the fact remains that she is the example of what happens when a Loki has a mission greater than himself. She didn’t have time to become a bitter narcissist because her life has always been on the run, and without that core selfishness she literally stopped being a Loki at all. And in seeing her, Loki discovered his own selfless mission: To assist her in any way he can.

“Journey Into Mystery” also offers a real-time demonstration of a Loki changing himself, as Classic Loki — a survivor like all the rest — chooses to sacrifice himself in a tremendous display of power in order to help Sylvie and Loki. Thanks to his efforts, Sylvie and Loki are able to enchant the giant smoke monster-slash-guard dog Alioth and open a pathway to… well, whoever or whatever is really behind all of this. And again, I very much hope it isn’t Kang, or isn’t just Kang, because — despite all the easter eggs — he hasn’t been a part of the show yet. This isn’t like revealing that it was “Agatha All Along”, this would be introducing the villain whole-cloth in the 11th hour. The problem is, if you don’t add a villain then you need to use one you already know — and aside from Ravonna or Mobius, this show has only given us Lokis. Personally, I hope a Loki is behind the TVA, and I hope it’s a Richard E. Grant Loki just because I waited all season for that man to show up and goddamnit, I want more of him. But more to the point I think thematically it should be a Loki. While it might be a little too on the nose for the show about how Loki doesn’t have to be a villain to conclude with a Loki who is the biggest villain, it also would be the perfect contrast. If there’s a Loki out there who not only didn’t fail but successfully hijacked all of time, becoming a threat greater than Thanos himself, then there’s no reason our Loki can’t find a path toward being whatever the hell he wants to be. Even a good guy.

Besides, can you imagine the look on Ravonna’s face when she finds out that she spent her entire career hunting Lokis under the directive of a Loki? Of course he’d know he’s a threat!

Anyway, now that I’ve said all that I’m sure Sylvie and Loki will step through that smoke and come face-to-face with Evil Owen Wilson sporting a larger mustache and riding a flaming jet ski or something. I really should just keep my mouth shut. Whatever happens next week, between what lies beyond the Void and what awaits Mobius in his showdown at the TVA, the real question is: Will it be a satisfying conclusion to the show we’ve just watched, or will it be another big ‘ol MCU movie set-up? Or will it somehow balance both?

-I was surprised at how emotionally touching this episode was, considering it was the penultimate episode and had a lot to establish. Classic Loki revealing that he survived all that time, only to be pruned for daring to try and not be lonely? Or Loki sharing that blanket with Sylvie and, instead of confessing his feelings, just admitting that yeah — he’s betrayed everyone who ever cared about him but he’ll try not to do it again? Or when he and Mobius hugged?! I think it all further supports that the hand-holding was in fact the Nexus Event on Lamentis, and for whatever reason the Sacred Timeline has a vested interest in keeping Lokis isolated and lonely.

- Despite all that touching emotional stuff, the MVP of the episode was absolutely Alligator Loki, who lacks all of the finesse of a traditional Loki and has no recourse but to bite people to get his point across. He bit several people and still, I could have watched more!

- Classic Loki revealing the extent of his sorcery is another insight into Loki’s magical potential — and a neat way to address the persistent criticism that Loki has often been nerfed in the MCU. He should be powerful, and should be a greater threat than he often has been. Even as far as his death in Infinity War is concerned, we’ve literally seen Loki fake his own death before — there was no reason he couldn’t have done it again with Thanos. I hope this is a hint that Loki will lean into his sorcery moving forward, and that — alongside Wanda — there’ll be more magic in the MCU.

- I love how everyone is squicked out about the idea of Loki and Sylvie dating. Personally, I’m not 100% convinced they’re in love but I’m not opposed to it. Mostly I wish the show would stop playing coy and pick a lane already. I’d accept it if they just aren’t used to having feelings for someone and misconstrue it as love, and I’d be fascinated if they bone down and get weird with it. I’d respect it if Loki confessed and Sylvie was like “I’m just not that into you” because love doesn’t HAVE to be mutual! I’m just afraid that next week the show will kill one of them off or otherwise alter reality in a way that the issue doesn’t have to be resolved.

- OK so let’s say the villain isn’t Loki or Kang. I would also 100% accept Evil Eugene Cordero. Where has HE been? I demand more Casey!


← How Long Can the Newsletter Boom Last Before the Bubble Bursts? | 5 Shows After Dark: 'Gossip Girl' Premiere on HBOMax, 'Good Girls' on NBC →