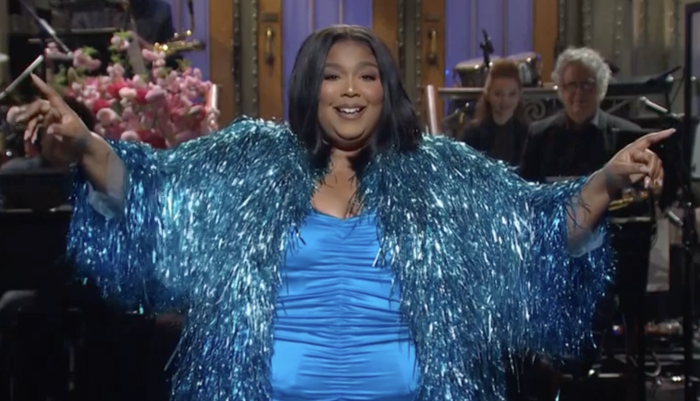 Cold Open — The show opens, appropriately, with Bowen Yang as the Easter Bunny, the “freakiest holiday character.” He brings out Fauci (if you’re not vaccinated, “I don’t care what happens to you”), Marjorie Taylor Greene (and her chocolate semi-automatic weapon), Mayor Eric Adams, Elon Musk (“I’m here to officially buy Easter. I’m offering 43 million peeps”), Britney Spears, and Jesus Christ Jared Leto (“If you go to see my new movie, please don’t review it”). It was going fine enough, but they had to bring out Trump. Needs more Lizzo. (Watch Here) (Score: 4.5 out of 10)

Lizzo Monologue — “Tonight, we’re going to break the record for how many times we say ‘bitch’ on live TV.” She’s got “brains and booty.” She’s “50 percent band-playing flute bitch!” and she’s is an absolute joy. This is going to be one of those nights where not even bad writing can bring hurt the show down. (Score: 6.5 out of 10)

Guess That — SNL has been doing a lot of Kenan-hosted game shows of late and they’ve all been great. This is no exception. This one is a straight question-answer show, only Lizzo’s Nicole takes extreme issue with the host, the questions, and the game and basically starts a revolt among the contestants. “Who died and made you the Mayor of Game Town?!” (Score: 6.5 out of 10)


Black Eyed Peas Album Recording Session — Basically, this is the origin story on “Tonight’s Gonna be a Good Night.” Aidy and Lizzo talk the Black Eyed Peas through the recording session. It’s brilliant. (Score: 7.5 out of 10)


Six Flags Grandpa — A woman (Lizzo) brings her date back to her home, where she lives with her grandpa, who is the guy from the Six Flags commercials. Like the commercials, it’s creepy as well and kind of annoying. But I get the feeling that Lizzo (who can barely stay in character) can make anything great. It goes on a little too long, but otherwise, it’s a gem. (Score: 7 out of 10)


Weekend Update — It’s one of those nights where the jokes are mediocre, but the energy in the studio is so good because of Lizzo that it doesn’t even matter. Everything works. (The dumbbell anus joke is legit good, though). Colin Jost’s driver, Cesar, comes out to do some stand-up comedy about his family, but then feels about it and apologizes. On any other night, this falls flat on its face. Tonight? It’s tolerably dumb! (Watch Cesar) (Score: 7.5 out of 10)

The Greatest Flautist of All Time — A symphony needs a flutist, and Lizzo can play the flute and shake that ass. She’s an amazing flutist, but she can only play while twerking. The conductor doesn’t like it, but the symphony members do. It’s dumb as hell, but works. This is the Mat skit of the week because Mat loves a good twerk. (Watch Here) (Score: 6 out of 10)

Beanie Babies — A couple quits their jobs and decides to travel the world using the money from their Beanie Baby investments until they find out their Beanie Babies are worthless. Lizzo cannot keep it together — she completely loses it and that, alone, makes the skit worth watching. (Score: 6.5 out of 10)