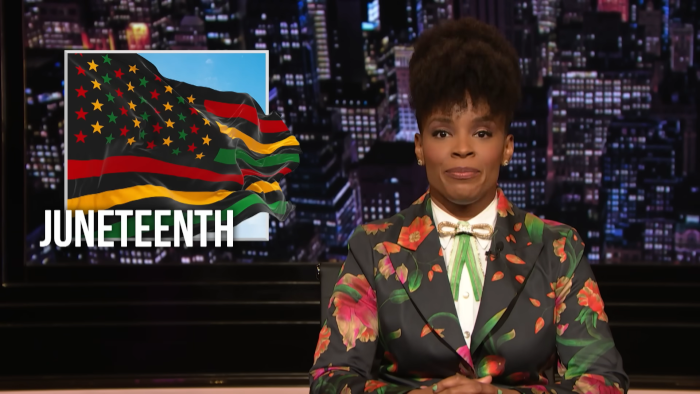 Yes, Juneteenth was yesterday. To be clear, I am a “take down all the bats and skeletons on November 1st” kind of guy. However, with Juneteenth now a Federal Holiday, we get to celebrate it twice. It took place yesterday, but it is federally recognized today. Yesterday we had fun, and today we don’t have to do s*** (unless you want to). Since today is Juneteenth in the eyes of the government, let’s take that time to hang out with Amber Ruffin as she clears up some misconceptions about the holiday.

This is a situation where I love that this segment exists but wish it didn’t have to. We live in a world where it needs to exist, so at least we get to hear it from Amber Ruffin! A good friend once described The Amber Ruffin Show as “unapologetically Black,” and they could not be more right. Just look at the Stacy Adams joke in this bit! That, coupled with the show’s ability to be just as smart as it is funny, allows for a segment about Juneteenth that is informative and hilarious.

This year’s Juneteenth has come and gone, but next year is right around the corner. Share this segment with your friends, no matter the color of their skin. The more things people learn about Juneteenth, the bigger a celebration it will become. Next, we’ll have Very Special Juneteenth episodes of The Goldbergs. Wal-Mart will be one of many stores selling Juneteenth ice cream. Kente Cloths will fill stores the way American Flags do on July 4th!

OK, we may not need those last three things, but if we keep talking about Juneteenth the right way we won’t get them!