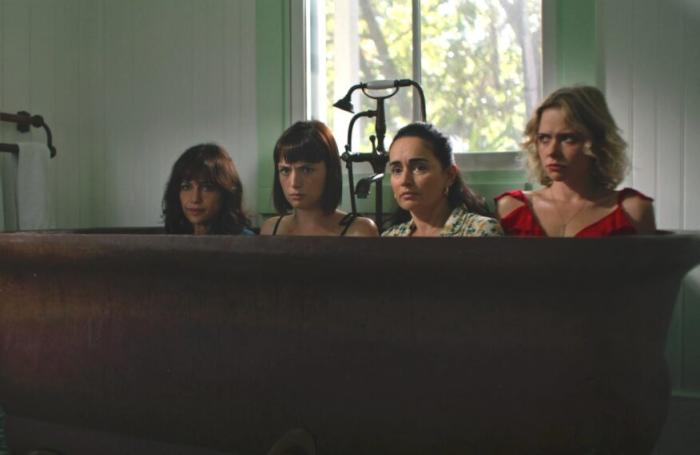 In the streaming era, there’s a lot of content, but the good stuff typically — but not always — bubbles to the surface. Leopard Skin is one of those exceptions, a series that stars Carla Gugino (Watchmen), Jeffrey Dean Morgan (The Walking Dead), Margot Bingham (The Walking Dead, New Amsterdam), Gaite Jansen (Peaky Blinders), Ana de la Reguera (Army of the Dead), and Amela Eve (The Haunting of Bly Manor), and yet, this is probably the first you’re hearing about it. It’s been out for two weeks. It’s also quite good.

Leopard Skin comes from Sebastian Gutierrez, the Venezuelan writer and director responsible for the screenplays for Snakes on a Plane and Big Bounce, but also the indies, Women in Trouble and Elektra Luxx, which he also directed. He also created, wrote, and directed Jett, the Carla Gugino and Giancarlo Esposito crime drama that may be the best thing that Cinemax has ever produced.

To be honest, Leopard Skin also belongs on Cinemax, but Cinemax no longer produces original programming. Peacock is an odd fit for the series, which features a lot of (tasteful) nudity and a style that doesn’t particularly suit the streamer behind the Pitch Perfect spin-off, Bumper in Berlin. Stylistically, Leopard Skin shares a lot in common with Jett: They’re sensual Soderberghian crime dramas, as if Gutierrez saw J. Lo in Out of Sight and thought, “That’s the sort of thing I want to make!” With his longtime girlfriend Carla Gugino, that’s exactly what he does.

Leopard Skin opens with Alba (Gugino) trying to have a conversation with Batty (Gaite Jansen), who appears to possibly be her girlfriend. Unfortunately, the conversation can’t happen because they have to prepare for a dinner party, plans for which are immediately put on hold when a woman holding a gun (Nora Arnezeder) barges in and takes both Alba and Batty hostage, as well as most of their eventual dinner guests.

The woman holding the gun, Siera, is part of a three-team crew that includes Fausto (Gentry White) and Clover (Bingham), whose jewelry heist goes awry. Clover was shot, and so the three hole up in Alba’s home to plan their next move, which entails making arrangements with the corrupt judge (Jeffrey Dean Morgan) who originally set up the robbery.

That’s the setup, but much of Leopard Skin is set in the days leading up to the heist, where we learn more about the characters, particularly the four women being held hostage: Alba, Batty, Maru, and Inocencia. Alba is a photographer whose husband left her for the younger Batty; Inocencia served as housekeeper to both Alba and Batty, and Maru is the dinner guest whose fiance is trying to make a documentary about Alba. The documentary, we eventually learn, is true crime in nature, and helps to explain why Alba is possibly romantically involved with her ex-husband’s new wife.

There are a few deaths involved, some sadomasochism, a bag full of diamonds, a bathtub, a swimming pool, and the ocean, but nothing unfurls in the brisk, eight (half-hour) episodes the way you might expect. It’s a jaunty unconventional crime drama featuring great performances, especially from Gaite Jansen and Gugino, whose chemistry is intoxicating. While it is ostensibly about a botched heist, Leopard Skin is really a messy, sensual, luridly compelling love story that will roll around in your head for days.