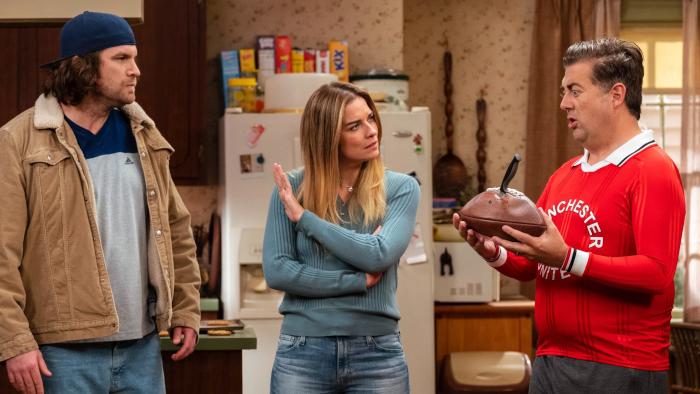 There’s a great exchange near the end of the season finale of Kevin Can Go F**k Himself that brilliantly encapsulates three of the main characters: Kevin, Sam, and Allison. When Allison yells at Sam — the man with whom she is having an affair — for allowing her husband, Kevin, to use Sam’s diner for a campaign event, Sam says, “Give in? It’s not exactly like he’s a puppet master.”

“Sam, that’s why Kevin gets away with everything,” Allison says. “It’s why he always wins … this whole world is designed for guys like him.” She’s not wrong. Kevin falls into one bad misadventure after another, but he somehow always comes out on top in spite of being an oblivious and terrible human being. In fact, the reason he always gets away with everything is because he’s so oblivious to how terrible he is. He believes the lazy, pathetic cable guy is owed something, and he’s too dumb to realize he doesn’t deserve it, so he takes it anyway. He takes from the world, he takes from Sam, and he takes from his wife, and everyone gives in because it seems easier, because it’s hard to imagine anyone as dumb as Kevin would be able to take advantage of those opportunities. There’s no way this lump of barely sentient human flesh could possible do anything without them. But he does. Kevin — and sitcom men like him — skate by. They fail upwards. They succeed because it’s too much of a hassle to stand in their way.

No wonder Allison wants to kill him.
Even murder proves too difficult when Kevin — who stumbled upon a gun in the backyard — uses it to shoot Allison’s hitman, Nick, and leaves him in a coma. Of course, Kevin makes hay out of an attempt on his life and transforms his victimhood into a campaign for city councilor. It is miraculously welcomed by a diner full of supporters who just love the way Kevin “tells it like it is” even if Kevin can’t tell the difference between “what it is” and a hole in his ass. The cops, meanwhile, barely even consider Kevin as a suspect in a drug-related murder, because Kevin’s too dumb to orchestrate such a plan. He’s saved by his own stupidity. Again.

No wonder Allison wants to kill him.
Realizing now, however, that she won’t be able to off her husband, Allison contemplates “giving up” and running away with Sam. But Sam — poor hapless Sam, who has spent years being pushed around by his wife and her family — doesn’t want to be that guy.

“Being with me is giving up?” Sam says, as though trying to take a page out of Kevin’s playbook and turn himself into a victim. Sam is not exactly the good guy here, either. He’s smart and handsome, and he’s sometimes charming, but Sam is exactly the reason why men like Kevin succeed. Because Sam underestimates mediocrity, and he allows the Kevins of the world to walk all over him because “it’s easier.” What is it that we say? Silence is complicity? Sam, in his own way, is complicit in the success of people like Kevin because Sam is too arrogant to see men like Kevin as a threat.

But there’s also arrogance in the way that Sam treats Allison. “I’m offering you something real,” he says. He’s trying to save Allison because he’s smug enough in his own way to believe that the messy, push-over owner of a failed diner that he owes to the in-laws of his failed marriage is in a position to save Allison.

Allison, however, reveals that that’s exactly how she ended up in a marriage with Kevin. Because he “saved her” from her parent’s house, and that didn’t exactly work out for her, either. She doesn’t want to be saved, or to be seen as a “charity case.” She wants someone “who likes me like this.”

“Like this?” Sam asks condescendingly, waving his hands in Allison’s direction. It’s hard not to see his point, too, even if Sam doesn’t know what we know about Allison (namely, that she tried to have her husband killed). Allison is a mess and even worse than Sam when it comes to Kevin. Rather than stand up to him — rather than simply divorce him — Allison tries to orchestrate his murder because in her mind, “it’s easier” than trying to extricate herself from a failed marriage to a slovenly, heathenistic narcissist who only acknowledges his wife when he’s in need of a punchline.

But therein also lies the problem with Kevin Can F**k Himself, a series where the stakes are too high. By building the series upon the premise that Allison needs to kill her husband (rather than leave him), creator Valerie Armstrong may have written herself into a corner, a corner that only got tighter when Kevin’s best friend, Neil — after overhearing Allison talk with Patty about her plan to kill Kevin — tries to strangle Allison to death only to be spared when Patty slugs him over the head and plunges Neil out of the sitcom world and into Allison’s dark crime drama.

Is this what Kevin Can F**k Himself needs to be? A show where Allison tries to evade both the police and her own death? Breaking Bad with laugh-track interludes? Unfortunately, Allison’s attempted murder conspiracy and Patty’s foray into drug dealing often seem to distract the show from what it’s actually trying to say about the sitcom husbands of the world. Its themes are buried beneath a police investigation.

Divorcing a guy like Kevin is hard enough — especially if there were kids involved — that the series didn’t need to ramp up the stakes so quickly. It’s a better show when it sticks to Allison’s frustration with her husband’s sitcom antics, when it explores the affair between her and Sam, and when it is centered on the burgeoning friendship between Allison and Patty. The series suffers from a serious case of Useless Protagonist syndrome, only instead of the protagonist that’s useless, it’s the main storyline. Drugs, hitmen, and cops aren’t necessary to tell those stories; in fact, they are detrimental. It’d be far more interesting to see Allison stand up to her husband without hiding behind someone else’s gun.

← The New 'Venom: Let There Be Carnage' Trailer, or, 'Don't Get Bit by Serial Killers' | I Would Like Amber Ruffin To Convince My Twin Babies To Take Naps, Please And Thank You →