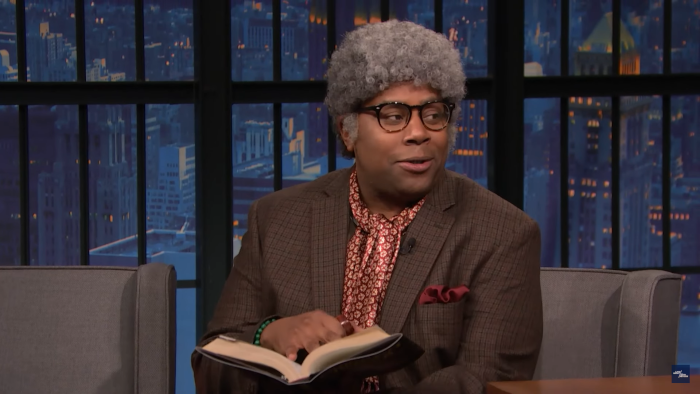 I have a hard time reading hard sci-fi. I can watch or listen to something in that genre. I have played plenty of video games that would be considered hard sci-fi. Heck, I’ve read comic books that are hard sci-fi. When it comes to prose, novels filled with new and pre-existing scientific terms that leave the fictional world presented grounded in reality? That can get overwhelming and begin to sound silly, like Kenan Thompson on the newest episode of Late Night with Seth Meyers.

Thompson did a standard interview with Seth, but then he decided to have some fun. Kenan went backstage, and when he returned he was no longer Kenan Thompson. He was sci-fi author Pernice Lafonk. Lafonk is Kenan’s take on elderly sci-fi writers and it is wonderfully silly. Both Kenan and Meyers have a difficult time keeping a straight face. I’m not always a fan of breaking, but it’s enjoyable here.

I don’t handle hard sci-fi well. That said, I would happily spend hours reading the works of Pernice Lafonk or letting him read them to me.