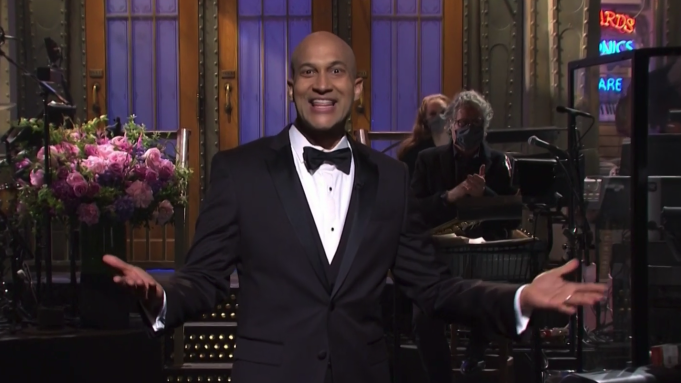 Keegan-Michael Key Hosts 'SNL' and Shows Them How It's Done

Keegan-Michael Key Monologue — Keegan-Michael comes out with a right and proper monologue song, which is not bad as monologue songs go. It’s not too long. There are a few decent jokes in there. There’s a costume change, and Kenan joins him at one point to remind everyone that they’re not the same person. (Score: 6 out of 10)

Prom Show — A red-carpet show for a high-school prom introduces some memorably couple types (Oh man, remember the “two dorks who bang”?), and it’s also lightly amusing. Also, if you didn’t know who the two dorks who bang were in your high school, it’s because you were one of them! I don’t feel like there’s a strong contender for Mat sketch of the week this week, but I’ll nominate this one. (Score: 6.5 out of 10)

The Last Dance: Extended Scene — An amusingly accurate extended scene where Jordan plays a silly quarter game and, after losing the first round to his head of security, proceeds to bankrupt and humiliate him because that’s how competitive Michael Jordan was. (Score: 7.5 out of 10)

The Muppet Show — This is the one that’s going to be rewatched 10 years from now: Everytime Statler and Waldorf interrupt Kermit from the balcony box, the security guards (Keegan and Kenan) come out to shush them in increasingly violent (and hilarious) ways. (Score: 8.5 out of 10)

Gemma & DJ Balls — Keegan and Cecily play low-rent musicians at a TGIFridays playing a birthday party for Gene on the day Gene learns that his wife left him on her vaccine date. They can’t all be winners. (Watch Here) (Score: 4.5 out of 10)

Weekend Update — It was one of those weeks with a great host so “Update” didn’t have to carry the show, and it didn’t! Che and Jost were fine, though they hit no homerooms this week (a smatter of doubles, though). Beck Bennett plays Bob Baffert, the owner of that Kentucky Derby winning horse that tested positive for testosterone and claims to be a victim of cancel culture because his horse is white (watch here); Kate McKinnon as Liz Cheney comments on losing her leadership position, and the funniest part of that segment is Cheney trying to list the handful of remaining conservatives who aren’t Trumpers (watch here); and finally, newbie Andrew Dismukes comes out to talk about his Texas upbringing his his great-grandmother, and now I know why we don’t see a lot of Dismukes. He’s actually got great material. He does not deliver it well. Stick with writing, Dismukes. (Score: 6.5 out of 10)

High School Graduation — During a graduation ceremony, a group of parents provide commentary after every name is called over the objections of the principal. This is a very Keegan and Peele sketch. (Score: 6.5 out of 10)

There was also a Gershwin tribute sketch for which there does not exist a video (you’re not missing anything), and two cut for time sketches, Rap Diss and Sending Drinks that were aptly cut for time.