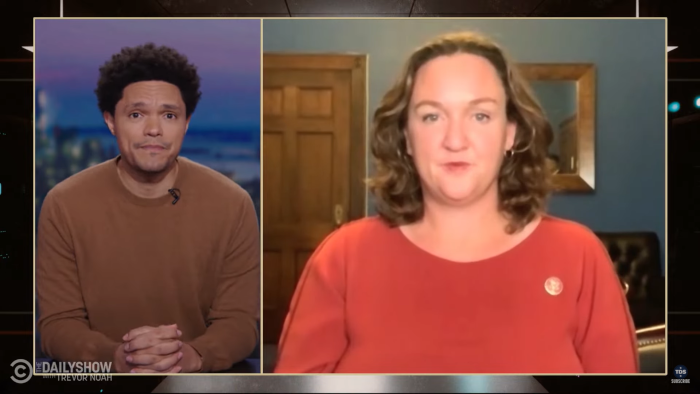 Representative Katie Porter means business. She’s made a name for herself by speaking truth to rich, powerful jerks. That’s how she operates. In a world full of Democrats with corporate interests, Katie Porter is the exact opposite. She’s constantly fighting for big businesses to not only pay their fair share but accept responsibility when they screw up. Spoiler alert, a very big company just had a very big screw-up, and she stopped by The Daily Show to talk about it.

Johnson & Johnson, the company whose vaccine you probably scoffed at, is in hot water. It’s been revealed that their baby powder contained asbestos for decades. The company knew this was the case, and yet they denied it. Not good, J&J! Now they’ve caught the wrath of Katie Porter. Porter makes it very clear that she will do what she can to make sure that companies like Johnson & Johnson don’t just declare bankruptcy to avoid responsibility (which is what they are trying to do).

It’s encouraging to watch Porter. It always is. However, Trevor Noah brings up a great point that can’t be ignored. Democrats are in power, but they’re being knee-capped left and right by people outside and inside of the party. How can we believe that anything will change when the roadblocks seem so insurmountable? At this point, it almost feels like a leap of faith. I’d like to think Dems can make a change. It just gets harder and harder, no matter how passionate and badass Porter is.

I haven’t completely lost hope. I do believe that people like Porter will help institute actual change. I’m just not sure if they can do it before it’s too late.