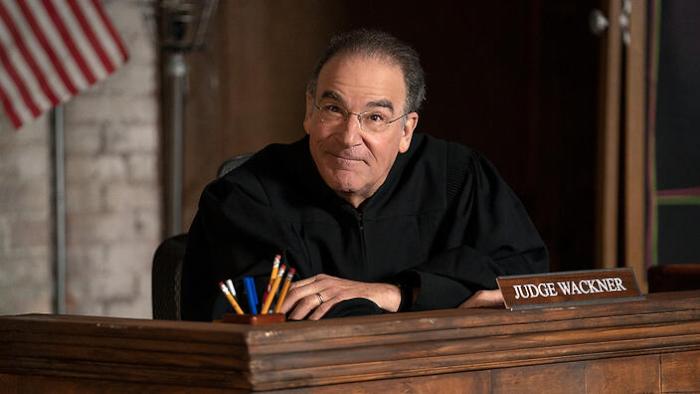 The Best Television Subplot of 2021

There was so much good television this year that a top ten list (or even a top 20 list) feels next to impossible. Something deserving will invariably be left out, and it’s not worth the grief of writing 10-20 blurbs that will be ignored while folks scan a list to see if their favorite show is missing so they have something to complain about. The Ducktales finale isn’t here? THIS LIST IS NULL AND VOID (I know, Tori. I know!).

What I do feel comfortable saying, however, is that Mandy Patinkin’s storyline in the fifth season of The Good Fight was the best subplot of 2021. It was a brilliantly constructed, thoughtful, and hilarious exploration of our judicial system in the era of Trump. It worked because of Patinkin, because viewers so readily wanted to believe in his character, and because we wanted to pull for him even as his brilliant idea unraveled and he proved himself to be a man corrupted by his own idealism.

Here is his subplot in a nutshell: Patinkin plays Hal Wackner (a clear nod to Judge Wapner of The People’s Court fame), a regular guy working in a copy shop who decides one day to create his own make-shift courtroom where he will be the judge. His decisions are based on a point system — if the defendant makes a good argument, she scores a point, and if the plaintiff makes a good argument, she scores a point. A bailiff keeps track of the points on a chalkboard. Wackner bases his rulings not on the law, but on common sense. He seeks to bypass the judicial system and to cut through the legalese, the loopholes, the technicalities, the bureaucracy, and the bullshit and rule in a legitimately fair and impartial way. It’s also designed to give everyone access to the justice system, regardless of their wealth or connections. At the end of every case, he also insists that both sides shake hands and say, “I respect and love you.” 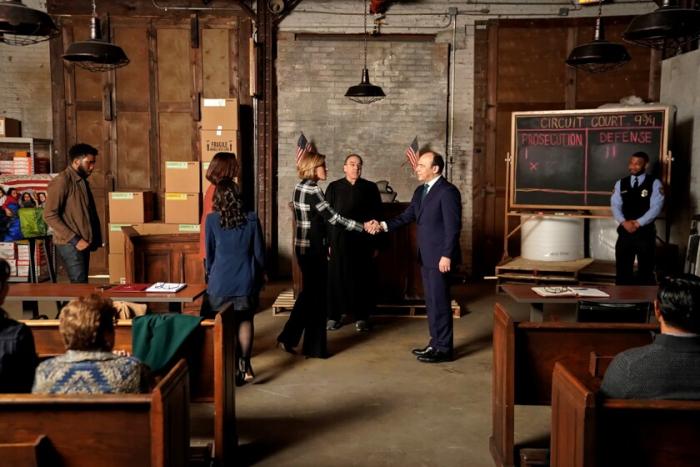 It’s a noble endeavor, and Wackner proves to be a kind, fair-minded judge. At first, only a few smaller cases come to him, but as his reputation for even-handed and equitable decisions based on common sense grows, more and bigger cases are brought to his court. He even manages to convince aspiring lawyer Marisa Gold (the always wonderful Sarah Steele) to serve as his clerk, which not only gives his courtroom some legitimacy but she helps keep the whole thing on its tracks. For a while, anyway.

Things start to come apart, however, when Judge Wackner insists that participants wear silly costumes — sort of like The Masked Singer: The Courtroom — so that he doesn’t make any decisions based on what someone looks like. It’s absurdist, but those who agree to be heard by Wackner go along with it. The costumes invite the attention of a reality-show producer (Wayne Brady) and a conservative billionaire investor, who likes that Wackner bucks the system. The money, though, comes with strings, and the need to generate ratings creates other problems, so that even if Wackner rules without bias, the perception of bias still exists. 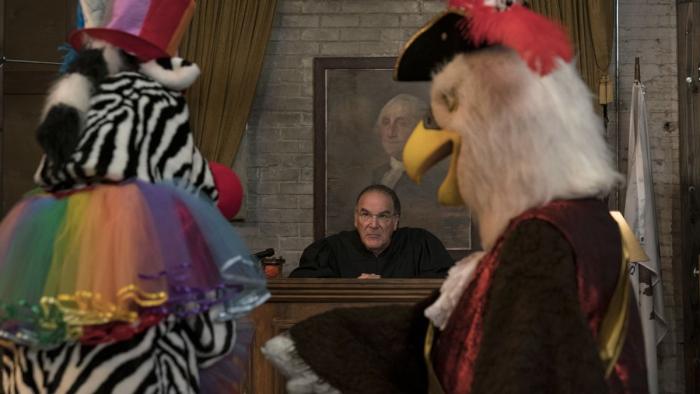 Slowly, we begin to understand why certain loopholes and safeguards in the judicial system exist. When Wackner agrees to hear criminal cases — and creates a makeshift jail to house convicted criminals — the system crumbles. The noble experiment ends when there’s a riot in the courtroom because Wackner rules against a group of racist, Trump-supporting secessionists trying to secede from Illinois. Wackner’s court has neither the infrastructure nor the legal authority to contain it.

Ultimately, it falls apart because it only worked while everyone agreed to let it work, but as soon as someone — in this case, violent secessionists — decided that it no longer worked for them, the court’s authority vanished into the ether. 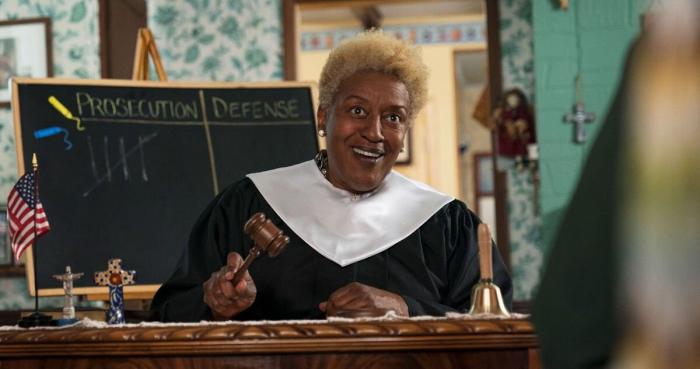 The depressingly predictable post-script is this: Hal Wackner stole the idea for his courtroom from a Black woman, Vinetta Clark (the magnificent CCH Pounder), across town, who had created a courtroom in her living room in an effort to clean up violence in her neighborhood. Wackner managed to operate his courtroom without police interference for months — in fact, some police officers, rather than navigate the bureaucracy of the judicial system, brought their arrests to Wackner to ensure more expeditious hearings. However, when police officers find out that a Black woman was operating a similar courtroom, they not only brought in a SWAT team and arrested her at gunpoint, they accused her of stealing Wackner’s intellectual property. Ain’t that America?

Vinetta Clark goes to prison (presumably), and Hal Wackner returns whence he came: A mere clerk in a copy shop.