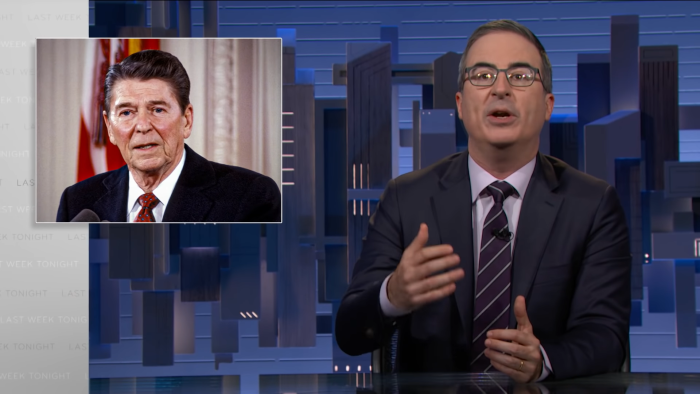 John Oliver Wades Into The Complicated Issue Of Homelessness

It’s hard for me to think about Ronald Reagan without triggering my gag reflex. The man pushed “values” and “ideals” and used that to demonize whole groups of people. His goal was to “make America great again,” though he often made it much worse. Part of Reagan’s legacy is exacerbating the homelessness crisis in America. While he did help make it worse, there are still many factors at play with homelessness. On the latest episode of Last Week Tonight with John Oliver, the eponymous host took a deep dive into why the problem persists.

First off, a large number of people simply don’t want to deal with homelessness. There is an “out of sight, out of mind” mentality that comes along with the problem. People want the unhoused to have help; they just don’t want to be the ones to do it. This isn’t merely a problem in Red States. Some of the people shown in the segment are from overwhelmingly Blue or Liberal communities, people who say they want better lives for others. Ya know, just not if that better life inconveniences their own.

Some people oversimplify the problem. There’s a clip of Dr. Drew stating confidently that housing issues are not part of the issue. He is, of course, incorrect. Lack of affordable housing, coupled with low wages, can cause homelessness to spike. Instead of that, Drew blames mental health and addiction. He says it in such a way that puts the problem on the individual and not the system at large, which does not help at all.

Everything I’ve mentioned here merely scratches the surface of what Oliver discusses. Homelessness is complicated and not looking to get better any time soon. We’re staring at the result of decades’ worth of demonizing and de-humanizing homeless people. As Oliver states, the only real fix is to get them into homes. Unfortunately, no one seems to want that to happen. It’s a damn shame.