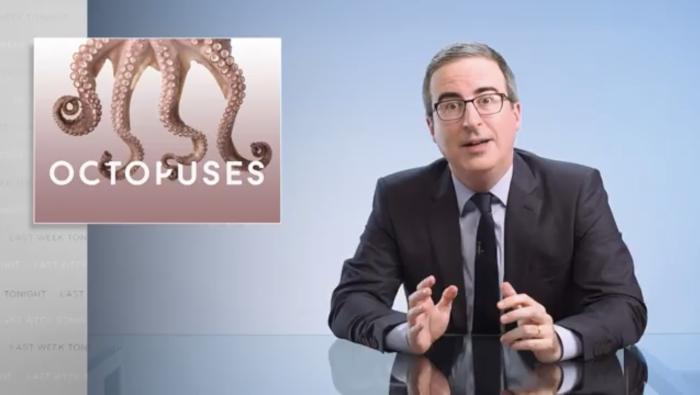 John Oliver Missed His Calling As A Nature Channel Host

Prepare to be wowed! Chances are, you came here expecting a story from John Oliver about endangered octopuses. “Oh great, what’s happening to them,” you thought as you clicked on the link. After all, Oliver often uses deep dives as a call to action. He’ll shine a light on a horrible injustice in the world as a way to inform people. This week isn’t that different. It’s just that, instead of political intrigue or an unjust prison system, this week’s injustice is simpler: people aren’t giving octopuses enough credit for being amazing!

That’s it. That’s the segment.

Oliver released this web exclusive to inform people of all the ridiculously rad things that octopuses are capable of. For instance, they can camouflage themselves with such efficiency that they make chameleons look like rank amateurs. They can even use tools! I sincerely left this video with a whole new appreciation of these magical creatures. That is due in no small part to Oliver’s intense enthusiasm.

John Oliver is so utterly jazzed by octopuses that it’s impossible not to get swept up by his excitement. When the time comes that he needs a break from the doom and gloom he usually shines a light on, I believe he should be rewarded with his own nature show. It’s only fair. Every week he can regale us with details of various sea or land-dwelling creatures. Marvelous, majestic beings that seem almost otherworldly.

← This Week's 'Evil' is a Terrifyingly Perfect Sample Episode | Get Vaccinated, Dummies. →