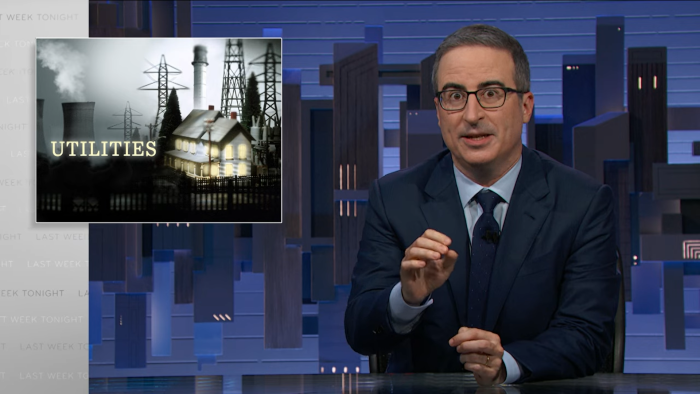 Have you ever had issues with your electric company? Did you ever try to get them to resolve an issue, only for them to take weeks or even months? Have you called the company and threatened to switch, only for them to laugh at you? You are not alone! It turns out that electric companies have had a competition-free business for over a hundred years. John Oliver took time out of his show last night to let us know that there’s likely nothing we can do about it.

To make a long story short, when America first wanted to form its electrical grid, it gave incentives to new companies. These included a promise not to be met with competition from other companies. This may come as a shock (pun intended) to some of you. I’m going to say it anyway. Most of these companies have abused this lack of competition. I know! I didn’t see that coming either because I was placed under a rock moments after my birth and have resided there ever since.

Oliver focuses a chunk of time on the California-based energy company PG&E. As a New Yorker, it was nice to know there may be a company worse than Con Edison. PG&E has caused damage that has caused fires, damage, and death. At least ConEd hasn’t gotten anybody killed!

After a quick Google search, I can say that ConEd has in fact gotten people killed. Woof.

A lot of these Last Week Tonight deep dives tend to feel hopeless, but this one felt especially so. Oliver offered some “solutions” but even he admits they will be hard to achieve. Things feel even more hopeless with how he ends the segment. I won’t spoil it here, but it illustrates just how f***ed we may be.

← After a Racist Massacre in Buffalo, Tucker Carlson Will Invariably Paint Himself as Victim | Interstellar Hunters Collide in Hulu's 'Prey' →