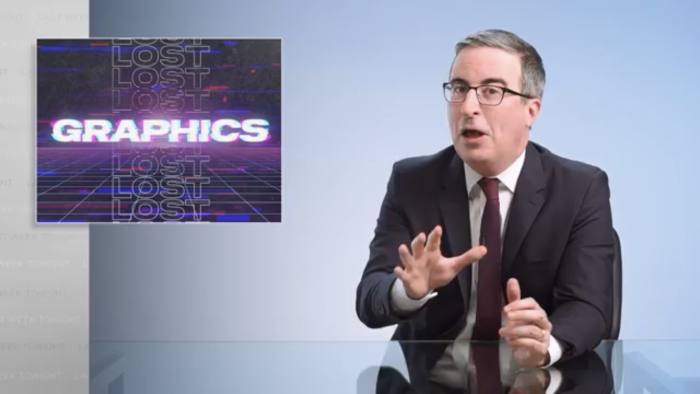 John Oliver Heaps Much Deserved Praise Onto His Graphics Team

Television shows consist of a lot of moving pieces. Writers, performers, producers, hair and makeup, craft services, tiger wranglers, sound design, and graphic design. With such a crowded crew, some contributors can occasionally go unnoticed. In the case of Last Week Tonight with John Oliver, the host wanted to make sure to shout out his graphics team, and let me say right now that they deserve it.

In an internet exclusive, Oliver revealed graphics that were made but cut from the show. Graphics, in this case, refers to images that are often shown above John’s shoulder to accompany a joke. They are as much a part of the show as he is. Sometimes the images are so absurd or even HORRIFYING that they distract from the joke itself but in an enriching fashion.

During Oliver’s parade of unused stills, he made sure to shout out his graphics team. He also praises their work. In a world currently (slightly) dealing with the outing of an abusive, horrible boss in Scott Rudin, it made me feel genuinely good to see Oliver publicly give credit like this. Sure the segment is an internet exclusive, but he didn’t have to release it. Not only did he share these images with the world, he gushed over them.

In interviews, podcast appearances, and on his own show, John Oliver appears to actually be a nice person. I’ve never met him, so I can’t speak to it as if it’s the gospel truth, but dammit it feels right. To me, his sheer giddiness at pointing out the efficiency of his staff’s work speaks to that. So that’s what I’m going with. You heard it here, people! John Oliver equals good guy. Somebody make THAT graphic.

← Where To Watch All The 2021 Oscar Winners? | There's a Reason Critics Aren't Wild About 'My Octopus Teacher' Winning the Best Documentary Oscar →