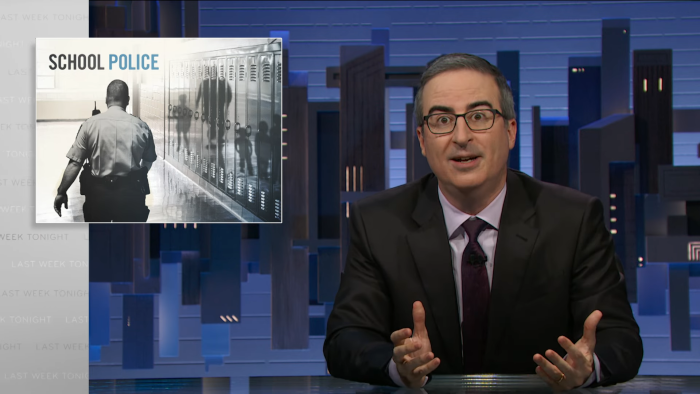 In the 1996 film The Substitute, Tom Berenger plays a mercenary and Vietnam vet who poses as a substitute teacher to help bust gang bangers and drug runners. The exact kind of menaces you’d find in an inner-city high school! It feels like someone saw Kindergarten Cop and said, “How can we do this but racist?” The answer to that question is not just, “let’s make a movie where Tom Berenger beats up mostly minority teens.” It is also, “Let’s put cops in schools.”

In the newest episode of Last Week Tonight with John Oliver, the host spent most of it talking about cops in schools. With the events of the Uvalde shooting still coming to light, calls for more cops to be in schools are being pushed by certain people (you know the ones). The snag is that police presence in schools has not only proven mostly ineffective against an active shooter, in fact, cops being in schools has had an overwhelmingly negative effect.

With cops in schools, teachers will often turn to them in basic disciplinary matters. This has led to children being reprimanded and even charged by cops for being children. Studies have also found that Black and brown students are more likely to be targeted by in-school police than white students. The reason is that cops aren’t trained differently when they are placed in schools. So, unsurprisingly, they target who they are trained to target.