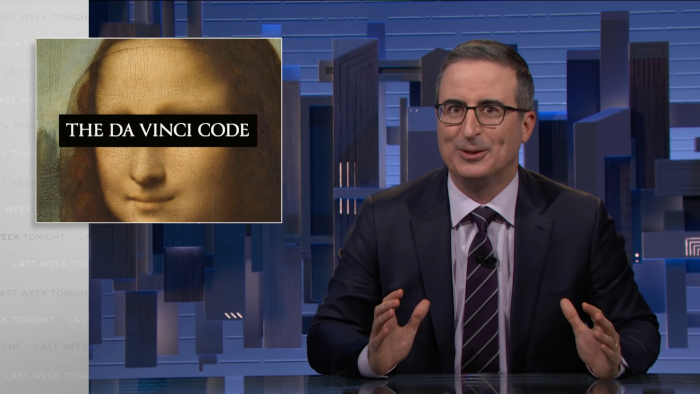 When The Da Vinci Code was released, I was an altar boy for my local Catholic Church. You would have thought the Church’s very life was being threatened. “What is this extensive, researched report released in book form,” I thought. It turned out that it was no more than a mystery novel that suggested Jesus had a life outside of the church. I was annoyed that this work of fiction got so many people so up in arms, and I was mad that those people were upset, to begin with. It all seemed so silly. Years later, I am no longer a member of the Catholic church, but The Da Vinci Code is still being discussed. By John Oliver, at least.

While his show Last Week Tonight is on hiatus, Oliver dropped a YouTube exclusive video to complain about the Dan Brown novel. His gripe lies more with the puzzle at the heart of the book and movie. A puzzle that I honestly had completely forgotten. That said, I’ll never forget it again. It does make sense, the simplicity of the puzzle. As we’ve come to learn, Catholics are terrible at hiding things.

The thing that got me the most about this video, aside from Oliver’s usual hilarity, is him referencing just how big the book was. I didn’t only hear about it at church. It was discussed in my (I’m going to age myself here) middle school history class, and I went to a public school. The book was everywhere, only increasing my annoyance when I found out it was basically a work of Catholic Church fanfic.

It was a simpler time, I guess. I can’t imagine a book like that doing the same numbers today, or having the same kind of impact. Honestly, I can’t imagine any book doing that. Instead, we have this little blip in history. A work of fiction that rattled the Catholic Church, captured the minds of millions, and relied on a stupidly easy riddle about an apple. Ah, memories.