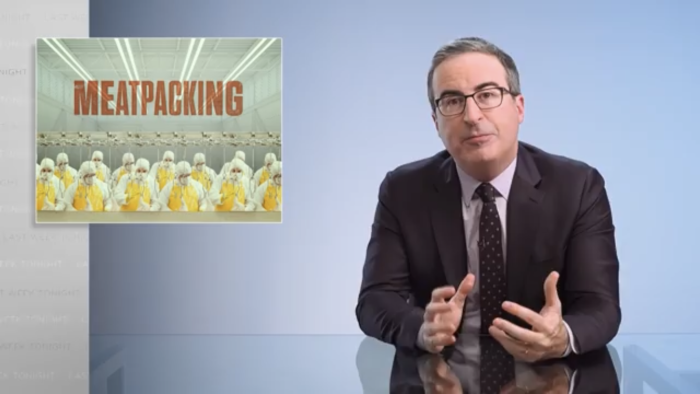 John Oliver Dives Into The Horrors Of The Meatpacking Industry

I love horror movies. Every August and September, I usually abstain from watching them so I can spend all of October watching nothing but spooky films. I’m always incredibly excited for “Shocktober” and then find myself quickly burned out by the grim subject matter. However, I power through, because that’s what I wanted! A similar thing happens to me when a new season of Last Week Tonight debuts.

John Oliver is one of the best late-night hosts working. His show will cover heavy, often uncomfortable subjects with thought and consideration and copious amounts of research and, ya know, jokes. It’s always wonderful to watch, even when it’s difficult. It also takes several months off between seasons (something most late night shows don’t do) so I always have time to miss it.

Last Week Tonight is currently on the second episode of one such return and Oliver is not holding back. After spending twenty minutes last week to let us know that we may not be prepared for another pandemic, this week, John decided to illuminate the dangers and money involved in the meatpacking industry and holy hell was it bleak.

I’m writing this from a very privileged position, that is not lost on me. I’m lucky enough to have never worked in a meatpacking plant, nor needed to financially or otherwise. So I’m left with this strange feeling of being made aware of the awful conditions under which some people in the industry suffer and feeling burned out by a comedy show.

I’ll keep pushing through, because, like horror movies, I love Last Week Tonight. It feels good to be informed in this way. But, we’re just two episodes back and already I’m … I’m tired, y’all. I’m tired.

← If Mac From 'It's Always Sunny in Philadelphia' Was a Real Person | 'You've Got Mail,' The Mandela Effect, and Collective False Memories →