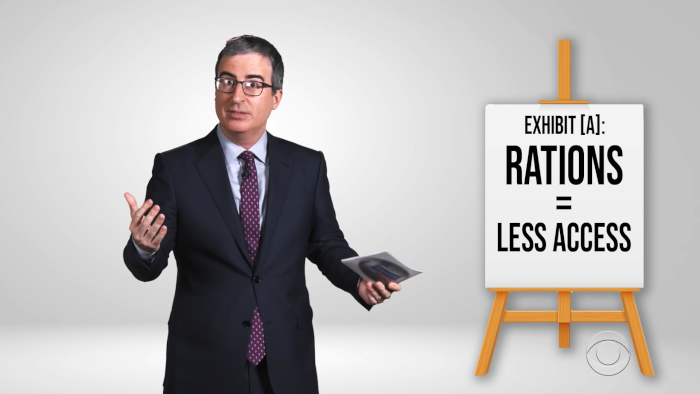 As a country whose answer to improving most foods is “just add cheese,” it feels silly to knock another country’s cuisine. We can’t act as if we have it so good while Applebee’s still thrives. Yet, another country still gets the brunt of the “yo food is so bad” jokes. That country is England and it has chosen a lone representative, Last Week Tonight’s John Oliver, to defend its puddings and pies on The Late Show with Stephen Colbert.

I will say that I’ve been to England, specifically London, once in my life and the food was delightful. I avoided the breakfast beans, but I had some wonderful fish and chips, great tacos (which I was not expecting), and all the sweets I could shove between my cheeks. I did have some of the worst pizza I’ve ever tasted in my life, but the rest still stands.

Clearly, I did not go far enough. I’d never even heard of some of the foods Oliver points out in this video. Some I was more familiar with by name, but not an actual, edible item. Perhaps I should return and sample more of the local cuisine! The blood sausage sounded… edible.

All jokes aside, Oliver is an absolute delight in this bit. That should come as no surprise, but he feels like he’s having even more of a good time than usual. From questioning the Colbert crew about how they heard of elevenses or almost saying England has the best Indian food and then nervously correcting himself, Olive is in rare form. We just need a Somebody Feed Phil style show where Oliver just samples British cuisine. Get at me, Food Network!


← Samuel L. Jackson Puts Joe Rogan on Blast for Using the N-Word | Sam Elliot Thinks 'The Power of the Dog' is a Piece of S**t Movie, But for Troubling Reasons →