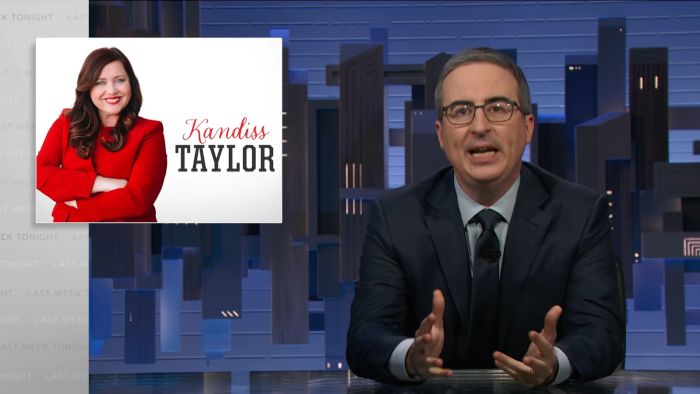 The wave of Trump-thumping, far-right political candidates is not breaking anytime soon. With every election cycle, we find ourselves inundated with more and more presumptive GOP representatives who are kookoo bananas. Conspiracy theories tend to fill out their platforms. Hate and vitriol are their currency. Ignorance is their most prized possession. Few exemplify this trend more than a primary challenger for Georgia’s Governor election named Kandiss Taylor.

You may know Taylor from her campaign bus, which featured the slogan, “Jesus Guns Babies.” Totally normal stuff. Oliver devoted most of a recent web exclusive segment to discussing the failed candidate. I say most because the segment was presented as being about rocks. He gets to rocks eventually, but not before touching on Taylor and furries first.

The material about Kandiss Taylor is about what you would expect. Terrible campaign ads, nonsense culture wars, and truly unhinged theories. For instance, Taylor was yet another Republican who pounced on a ridiculous claim that teachers were dressing up children like dogs and cats and forcing them to use litter boxes. The phrase, “The furry days are over when I’m Governor” is something Taylor just put into the world. Again, normal.

All of this leads to a moment of discovery about a mysterious monument in Georgia. Without spoiling anything, let’s just say that Taylor was against the monument before but may be more in favor of it when she discovers its actual, troubling origins. As of this writing, Taylor has yet to concede her loss for the Republican nomination. But she did lose. At least there’s that.

← 'Stranger Things,' 'Obi-Wan,' And Dustin Isn't Here On Podjiba! | If the Jury Messes Up the Depp v. Heard Verdict, There's No Hope for the Jury System →