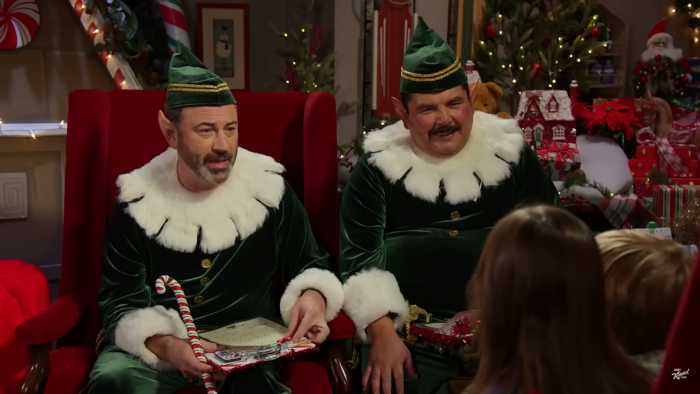 Jimmy Kimmel Loses It When a Little Kid Starts Swearing

My twins are twenty-one months old (I was once snipped at in the park by another parent for referring to them as “a year and a month” instead of thirteen months, hence referring to them in months). This year, they are old enough to understand who Santa is. At the very least, thanks to Pee-Wee’s Christmas Special getting a heavy rotation here, they know he exists. This year, Christmas will be pure joy. They don’t grasp bad or good yet. But in a couple of years, my wife and I have to figure out if we want to go the “Santa has narcs everywhere” route.

On one hand, I don’t want them to think that “goodness” always comes with a reward. As they say, be good, for goodness sake! However, I am excited about the shenanigans that come with identifying what is bad. That mishegoss was on full display in a recent bit from Jimmy Kimmel: Live. Kimmel and his trusty sidekick Guillermo dressed up as elves and asked a brother and sister pair if they had been naughty or nice. The kids are adorable and funny and things ramp up when the little boy is asked about his swearing.

The number of bleeps that emerge from this little kid’s mouth is funny enough. It is ramped up by the fact that he is just casually recounting the swear words he knows. They are doozies! His sister is left in hysterics, as are Jimmy and Guillermo. It gets even funnier when he suggests that stupid is as bad as a motherf***er. Ah, the innocence of filthy-mouthed children.

My kids will avoid this kind of holiday grilling for now. Mainly because of their age. But I have managed to trick one of my kids into saying “oh, f***” a few times. I’ll just make sure to let Santa know that it isn’t his fault.