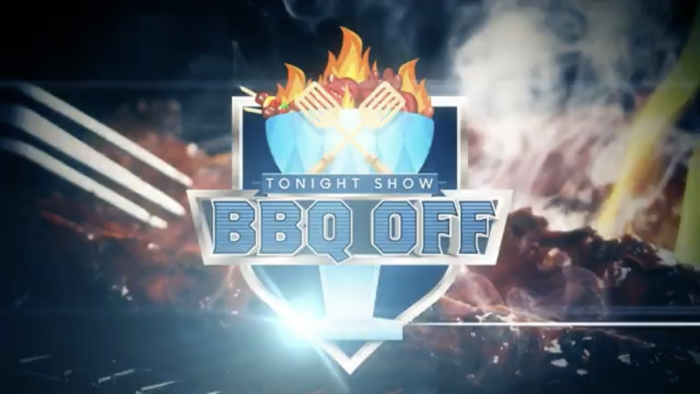 Is that Donkey Sauce I smell? I feel like I smell it all the time now because I, Andrew Sanford, am a Guy Fieri convert. Cooking shows in general, but Guy Fieri especially. It’s never something I thought I would be into, but here I am, getting regularly psyched to see silly people compete in the kitchen. Or, in the case of a new Tonight Show segment, the grill!

Jimmy Fallon and Roots legend Tariq Trotter, having faced off in a bake-off before, this time went toe-to-toe with BBQ. They went to the roof of 30 Rock to prepare their specialty dishes, both of which were to be judged by Chef and food writer Claire Saffitz. It’s a cook-off, people!

Something about this bit got me hyped all the way up. First off, as I said, I’m all about them cooking competitions right now. Second, that BBQ got me all kinds of excited for summer. The time of year where I can stand out on my NYC sidewalk and fire up a grill, much to the chagrin of joggers, is finally here! Seeing Jimmy sit on the rooftop and enjoy a beer while making pulled pork? It’s what I needed.

Fallon seemed laid back in this sketch. I know people like to give him flack for forcing laughter, etc., but here he was really in his element. I’m not kidding when I said he gave off Fieri vibes. Just content, silly, and excited about pork. I get it.

I won’t say who wins, but both dishes looked good. One was certainly more traditional than the other, but I would happily load up a plate with both. Then grab a handful of Doritos, maybe a seltzer or two, really get wild! … …y’all, I think I need to eat something.