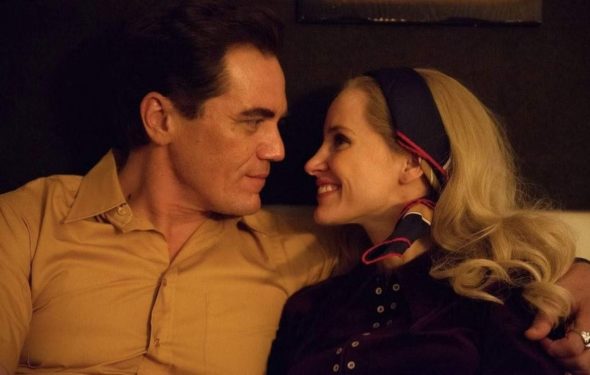 The world of 20-century country music was as unforgiving as it was glamorous for its favorite stars. From Hank Williams to Johnny Cash and Gram Parsons, Nashville success often set the stage for abuse and tragedy. The same goes for George Jones and Tammy Wynette, the titular stars of Showtime’s latest mini-series, George & Tammy. The six-episode series is based on The Three of Us: Growing Up with Tammy and George (2013), a book written by the couple’s only daughter, Georgette Jones. As it has come to be expected of the ever-expanding genre of musician-biopic (to the point of parody), George & Tammy is no easy watch; but is worthwhile for fans of the couple and country music lovers.

Chronicling Jones’ (Michael Shannon) chronic alcoholism and Wynette’s (Jessica Chastain) developing addiction to prescription painkillers, the show follows the pair as they meet, fall in love, become the “First Couple of Country Music,” divorce, and fall victim to both vice and circumstance. While the series doesn’t break new ground, it frames the lives and careers of Jones and Wynette, the power of their music, and interior struggles, while highlighting—pardon my phrase—just how hard it is to be a woman.

Written by biopic veteran Abe Sylvia (writer of The Eyes of Tammy Fay, also starring Chastain), George & Tammy begins at the duo’s fictionalized first meeting in Nashville and (as of Ep. 5) through their post-divorce relationship. Sylvia, in collaboration with Georgette Jones, wanted the series to tell the Jones/Wynette love story. Although the mini-series format (as opposed to a feature film) gives room to the nuances and patterns in Jones’ and Wynette’s life, episodes are, 5/6ths of the way through the season, over-punctuated by Wynette’s abuse: blackmailed by second-husband Don Chapel (Pat Healy), at gunpoint by a drunk Jones (a few times), emotionally manipulated and under the coercion of drugs by fifth husband George Richey (Steve Zahn), and failed by doctors (botched emergency hysterectomy, leading to her dependence on prescription pain killers). Instead of a romance punctuated by conflict, the show, especially in later episodes, feels like a cross between Gaslight (1944) and American Horror Story: Abusive Men of Nashville. Wynette, through no fault of her own, spends the show (and we can assume her life) betrayed by abusive men, bearing their repercussions as if her fault. The Jones/Wynette chemistry is palpable when they are together and he remains sober, but the series’ romantic elements hardly make a feel-good love story; rather, it is a sobering look at celebrity, gender roles, and the entertainment industry.

I imagine when Sylvia expanded his original feature script to a six-episode mini-series, he chose to tell the couple’s “love story” by contrasting their experiences of vulnerability: Jones, insecure with himself while on top of the world, and Wynette, self-assured, but under near-constant threat of destruction or violence at the hands of men, ambitious for a taste of star power. While the dichotomy allowed for loving moments of give-and-take (Jones moving to Wynette’s record label, Wynette doling out chores to keep Jones busy), Jones’ chronic alcoholism doesn’t compare to the abuse Wynette suffered, rendering Sylvia’s intended love story less thematic than he intended.

Tammy Wynette was emotionally vulnerable in her music—and don’t worry, the series has plenty of biopic style perfectly timed songwriting sessions. Her real vulnerability, however, is that no matter how big she got, Wynette was a woman and the men around her used that against her, too often, exploiting her for their own gain. In context with stories like the Britney Spears conservatorship, the vilification of Amber Heard, and recent hate directed at Megan Thee Stallion, Tammy Wynette’s story is hardly surprising, but all the more worth remembering.

After suffering abuse at the hands of her partners and being dragged by the press, Tammy can’t even get answers or adequate treatment for the chronic pain caused by the emergency hysterectomy performed on her, finding prescription painkillers the only way to live and perform as was expected of her. After all that and dealing with Jones, I often had a hard time feeling sympathy for anyone who lay an unkind hand on her. To the show’s credit, Jones—despite his alcohol-infused rage—does not come off as cruel, calculated, or even particularly villainous in context with the other men who orbited Wynette; rather, he betrays the vulnerability, hurt, and instinct of an abused animal. Such childhood trauma has not yet been confirmed, but hinted at by both Jones and Peanutt, (Walton Goggins aka Uncle Baby Billy Freeman of The Righteous Gemstones) his drinking buddy turned sober man of God and pseudo-sponsor.

Although the romantic element is often overshadowed by a pervasive sense of dread (Will George take a drink? Is someone stalking Tammy?), the series paints a loving—if not over-generous—portrait of two of country music’s most distinct voices. Notably, it does so without pushing its actors into parody or cheap imitation. Instead of recreating famous photos or moments (a la Blonde), the series opts for scenes that evoke the feeling of particular album cycles and eras of touring. Ep 5, for example, drew a lot from the style and tone of the album artwork from Wynette’s Til I Can Make It On My Own… making the episode’s opioid-induced conclusion all the more ominous.

Much of the series’ music was performed live on set by the actors as opposed to relying on pre-recorded audio or original recording of Jones and Wynette, lending to the on-stage (as in literal concert stages) chemistry between Jessica Chastain and Michael Shannon. While the couple performs, harmonizing even throughout their banter, it’s easy to forget the show’s more glaring liberties: Notably, how little Shannon looks like Jones. The incongruencies melt away as they stand on stage. Chastain and Shannon are an intoxicating force throughout the show, but particularly while performing. When they’re in a good place they move as one and are able to effortlessly play off each other like ballroom dancers. When they hit bumps in the road, of which there were many, the “First Couple of Country Music” acts no less endearing, but channels their vitriol into on-stage battles of charm and talent, practically challenging each other to live charisma-offs to the tune of their greatest hits. Likely to the credit of on-set and post-production music producer Rachel Moore, the pair never aims to copy the distinct voices of Jones and Wynette, Chastain and Shannon correctly chose to engage with the spirit (over the sound) of the live performances that endeared this couple to the country music world and beyond.

George & Tammy is an okay show made better by stellar performances and excellent music production. It offers fans a chance to interact with a duo formative to many a country music lover and nonfans, at best, an appreciation for the people behind the shiny George and Tammy masks, and at least, a working knowledge of the lyrics to Stand by Your Man. The series finale is available for streaming on Showtime Friday, January 6, and airs on Showtime Sunday, January 8 at 9 PM.


← Details About a Scandal Involving Tini Stoessel, Rodrigo De Paul, and Camila Homs | Shoot Her Down, But She Won't Fall. 'M3GAN' Is Titanium →