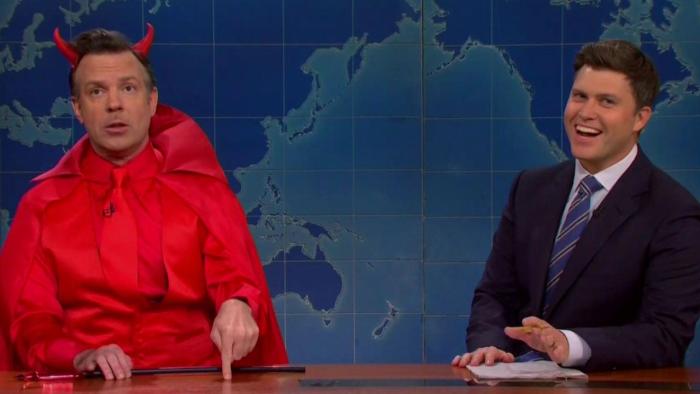 Cold Open — They had James Austin Johnson come out and do his Biden, only to bring in Sudeikis to do his Biden, as the Biden of the past. The joke is that old Biden from 2013 was a lot more fun, but also, the inadvertent joke is that Sudeikis is a much, much better Biden than Johnson except for, you know, all the handsiness. It’s a good skit to the extent that it’s great to see Sudeikis again. Really great. But that’s about it. (Score: 4.5 out of 10)

Sudeikis Monologue — Sudeikis is Sudeikis. Just a lovely guy, talking about SNL, Ted Lasso, and generally being a good person. (Score: 7 out of 10)

Science Room — Sudeikis plays Mr. Teacher, a gentle Mr. Wizard kind of guy, only he’s dealing with some idiotic kids and quickly losing his patience. After he loses it, he then takes it out on the parents. (Score: 7.5 out of 10)

Mellen — A new talk show — Ellen, but with a male host. It’s basically what would happen if Barstool Sports channeled Ellen DeGeneres. Brilliant. (Score: 7.5 out of 10)

Annie — It’s that musical scene from Annie where everyone describes what they do in Mr. Warbucks’ house, only a guy named Ricky (Sudeikis) won’t say what he’s doing because it’s not above board. He may be a little creepy. He also, uh, procures the meat. (Watch Here) (Score: 6 out of 10)

Kieran Culkin to host the next episode (on November 6th)!

Parent-Teacher Conference — A teacher (Sudeikis) hits on a mom in front of the dad during a parent-teacher conference. It progresses very quickly. Sudeikis is smoldering. (Watch Here) (Score: 5.5 out of 10)

Jake’s Non-Stick Underewear — Underwear made with non-stick Teflon? So you don’t have to throw your undies away every time you, uh, make a mistake. Meh. (Watch Here) (Score: 4.5 out of 10)

Weekend Update — Not that the show needed the boost, but Che and Jost deliver a solid but short “Update,” and Sudeikis returns as The Devil, who admits that he has Tom Brady’s soul. The ScarJo jokes are also priceless. (Score: 8 out of 10)

What’s Up with That?! — The return of Sudeikis means the return of “What’s Up with That!” No Lindsay Buckingham, but Oscar Isaac, Emily Ratajkowski, and Nicholas Braun appear as the ignored guests — Braun being confused for Buckingham in a Cousin Greg costume. And yes, they pulled Sudeikis’ red tracksuit out of the mothballs. It’s perfection. (Score: 8.5 out of 10)

Signing of the Declaration of Independence — During the signing, one of the Founding Fathers (Andrew Dismukes) suggests putting a sick-ass treasure map on the back of it. (Watch here) (Score: 5.5 out of 10)

Indecent Proposal — Kenan plays the Robert Redford role, but he can’t stop negotiating for a lower amount. It’s very dumb, but very funny, and also the Mat sketch of the night. (Score: 7.5 out of 10)