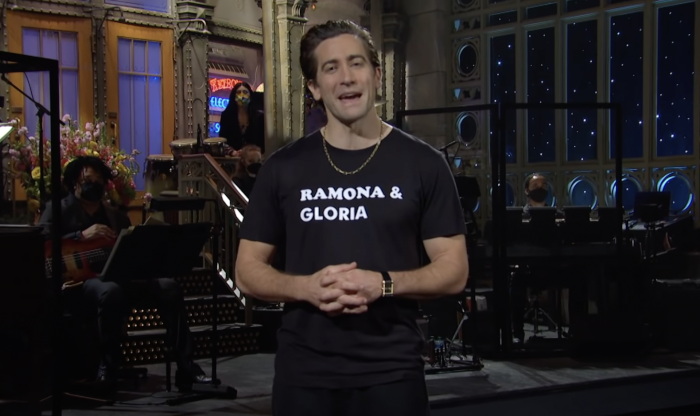 Jake Gyllenhaal's 'SNL' Is Very Dumb, But Not Always in a Bad Way

Cold Open — Joe Biden chats with Ketanji Brown Jackson, who in turn talks with the ghosts of Ruth Bader Ginsberg, Thurgood Marshall, Harriet Tubman, and Jackie Robinson, and while it’s not that funny, it’s a neat skit (although the joke is mostly, “the more things change, the more they stay the same”). (Score: 5 out of 10)

Jake Gyllenhaal Monologue — Gyllenhaal says he’s changed a lot since he hosted 15 years ago; he takes it less seriously now, which he illustrates by singing a version of, “It’s All Coming Back to Me.” He’s got pipes, but I’d have given him a higher score if he’d pulled off his suit and was wearing the same dress he wore in the monologue 15 years ago. (Score: 6.5 out of 10)

Why’d You Like It? — The host (Kenan, naturally) shows contestants a picture they saw on Instagram, and they have to explain, “Why’d you like it?” They’re mostly thirst traps, and the reasons mostly have to do with wanting to have sex with the people in the posts. There’s a lot more mileage in it than you might think. (Score: 6.5 out of 10)

Dream Home Cousins — It’s a Property Brothers type thing, where the wife’s dream home is incredibly compromised to accommodate her elderly mother-in-law. Kate McKinnon’s mother-in-law is fantastic, while the rest of the skit is … fine. (Watch Here) (Score: 5.5 out of 10)

The Singers 4 — Jake, Kate, Cecily, and Bowen are cabaret singers who perform a song about their profound mediocrity. It continues tonight’s trend of “pretty good” skits! (Score: 6.5 out of 10)

The Garden Bed — It’s a kid-friendly skit about flowers where they all sing joyously about spring until Bowen Yang’s bee shows up and starts humping the flowers, and then Kyle Mooney’s weed shows up and wants to choke everyone. And then the dog pees on them, which is a real kink for Chris Redd’s flower. It goes on forever, and not in a good way. And there goes the run of “pretty good” skits. (Watch Here) (Score: 3 out of 10)

Chucky in the Workplace — Chucky doesn’t fit into the workplace very well, what with that stabbing and all. Also, real bad CGI. (Watch Here) (Score: 4.5 out of 10)

Weekend Updates — A lot of really dumb jokes in tonight’s “Update,” which is not an insult. Aidy and Bowen “track the trends,” and they are vicious to what’s “out.” “Update” was good. The trend tracking was terrible. (Score: 7 out of 10 (the Aidy/Bowen segment is more like a 3, which you can watch here).

Cough, Cough, Bang Bang — Jake G. plays a much, much sicker version of Doc Holliday with tuberculosis than did Val Kilmer in Tombstone. It’s very dumb, but also kind of funny and very gross. This is definitely the Mat skit of the week. (Score: 6.5 out of 10)

Couples Therapy — The couple’s therapist has a violently abusive relationship with her own girlfriend. It’s surprisingly helpful! Also dumb. (Watch Here) (Score: 5 out of 10)

There are two cut-for-time skits, and both were cut for reasons, but you really need to see how bad Kyle Mooney’s “Serius Night Live” is.

Oh, it’s also worth noting that, even though there are a couple of Will/Jada jokes during “Update,” their daughter is actually in the show, too, playing guitar for musical guest Camila Cabello. Also, the Romana and Gloria T-shirt Jake wore to introduce her refers to his nieces (Maggie’s kids).