It’s time for the annual Muppet Halloween party. This year, instead of attending, Gonzo has decided to prove his fearlessness by spending the night in the reportedly haunted mansion of his hero, The Great Macguffin. It’s the anniversary of Macguffin’s mysterious disappearance and Pepe The King Prawn has tagged along, mistakenly hoping to hobnob with some celebrities at what he thinks will be a big party. 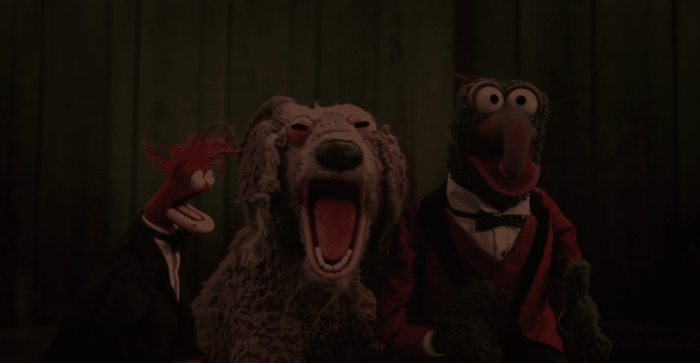 When the duo arrives at The Haunted Mansion, they’re greeted by The Host (Will Arnett at his mustachioed finest.) He explains that, in order to survive the night, they’ll have to face all of their worst fears before morning. As Gonzo and Pepe make their way through the mansion’s various rooms, they’re confronted by all sorts of spooky and entertaining Muppet spirits. We get a dirge-y number by Dr. Teeth and the Electric Mayhem; a stand-up routine from a ghostly Fozzy, complete with heckling from Statler and Waldorf — who float through in a set-piece taken directly from the Disney ride — and various Jim Henson Company creature creations.

While Gonzo is busy working out what he’s actually afraid of, Pepe falls under the sway of a beautiful but deadly ghost bride, played by Taraji P. Henson, and almost forfeits his muppety life. Of course, our beloved, blue, weirdo saves the day. Both Gonzo and Pepe live to see dawn and head off to join their friends for a Halloween Brunch.

It’s a perfect Muppet Halloween story, chockablock with very special guest stars including Imagineers like Kim Irvine, and Hollywood types like Alphonso Ribeiro, and John Stamos. Even Danny Trejo and Pat Sajak show up as unlikely ghosts in the opening, amongst others. There are the catchy musical numbers we’ve all come to expect from a Muppet special. With apologies to Miss Piggy, it is a bit ham-fisted in the message about being loved without having to prove yourself, but it’s still very fun and hits all of the right notes for family viewing during this spookiest of seasons.

While it all looks familiar, those of us who grew up with the original Muppet Show know that it will never sound the same. Dave Goelz is the only one of the original Muppet performers credited on this special. Historically, he’s handled the performances of Gonzo, Dr. Bunsen Honeydew, Zoot, and Waldorf (plus assorted other critters per the 1978 Muppet Show Book, which I’ve owned since circa 1980.) Everyone else has new(ish) voices. While they’re still great, they’re never going to be perfect. Kermit doesn’t sound the same since Jim Henson died in 1990.

Arguably, the most famous performer to come out of The Jim Henson Company is Frank Oz. He’s given voice and soul to some of everyone’s favorites across The Muppet Show and Sesame Street. Fozzy Bear, Miss Piggy, Bert, Cookie Monster, Grover, Animal, and Sam The Eagle (among others) were all Frank Oz. Although he has continued to voice Yoda in the Star Wars franchise, Oz hasn’t worked with The Muppets since 2007. He hasn’t been on Sesame Street since 2015. In a really kind of sweet interview with Hadley Freeman for The Guardian earlier this year Oz explained how he thinks the negotiations with Michael Eisner to sell Disney the Muppets is what killed Jim Henson.

“Eisner was trying to get Sesame Street, too, which Jim wouldn’t allow. But Jim was not a dealer, he was an artist, and it was destroying him, it really was.”

So far the writers Disney has employed don’t know to write for The Muppets. I imagine their hubris makes them believe they can. But the characters need writing that has depth and honesty. I suppose a version of The Muppets will survive. But they won’t be true.

Frank bruised some egos over there with his opinion on the newer Muppet projects. I can’t argue with him. While the 2011 film was fun and familiar I chalk that up mostly to the writing team Jason Segel put together. It’s a heartfelt love letter to the original show and movies. Since then? Meh. It all has felt a bit soulless. The short-lived 2015 series was basically a sitcom in felt that had none of the charm of the original program or any of their movie capers. The Muppets Haunted Mansion is probably the closest we’ve come to recapturing the magic and heart of the old show in a long time.

I’m happy that Disney+ has allowed me to share my love of all things Muppet with my kid. I’d love to see more new projects from them. Maybe Disney should take the note from Frank. If he wants back in no one knows these characters better than him (sorry/not sorry Brian Henson.) Allowing Oz, who is a very talented comedic director in his own right, back in can only make The Muppets better and bring some voices we’ve missed back into our lives. 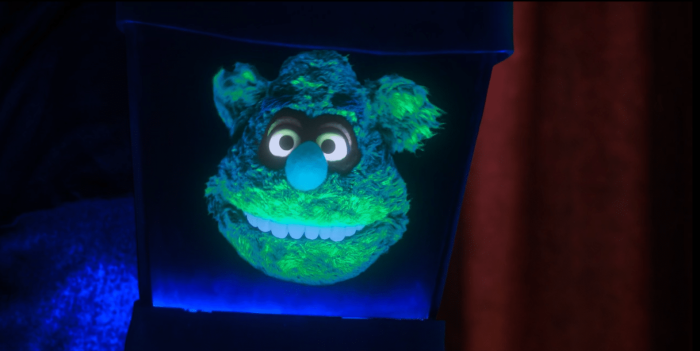 The Muppets Haunted Mansion is now streaming on Disney+.


← James McAvoy Reads Some Thirst Tweets; Is Sufficiently Entertained | For Their Next Big Bad, 'Fear the Walking Dead' Promotes from Within →