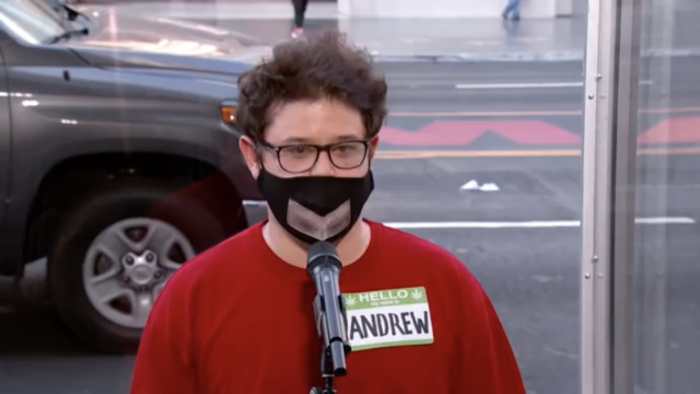 From time to time I’ve been known to enjoy a jazz cigarette or two. Because of my penchant for pot, I felt personally targeted by Jimmy Kimmel’s latest iteration of “Who’s High.” The reason being that one of the contestants was a man named Andrew with curly hair and glasses who says he is a writer!

For those who, like me, were not familiar, “Who’s High” involves Jimmy’s producers wrangling up three people on the street, one of whom is high. Jimmy then asks them questions, trying to find out who the stoned one is. I haven’t watched a lot of Jimmy Kimmel Live. I’ve always been more of a Conan guy. But that’s what makes this all the crazier! Jimmy has been playing the “Who’s High” game for years but the first time I ever watched one, my West Coast counterpart shows up as a contestant!

Once I was able to get over my uncanny resemblance to one of the guests, it was pretty easy to enjoy the game. While I’m not usually a big fan of the “you’re so high, man” kind of humor, there’s something inherently funny about someone trying to not act high on camera. During the first round, it was hard to guess who the culprit was. The second round … not so much.

I also appreciate that the sketch wasn’t mean spirited about it. There are certain stigmas around marijuana and its usage that are progressively fading away like so much doob smoke. The sketch does feature some of the same old jabs, like offering the guests bubble wrap to play with. Ya know, because they’re high? However, it’s done in good fun.

Honestly, aside from my doppelgänger, the weirdest part about all of this was the face masks the contestants were wearing. All of them had clear patches in the front. My guess is that the masks were chosen so you could see their mouths but their breath just seemed to fog them up. Either it looked weird as hell or I’m just… never mind.