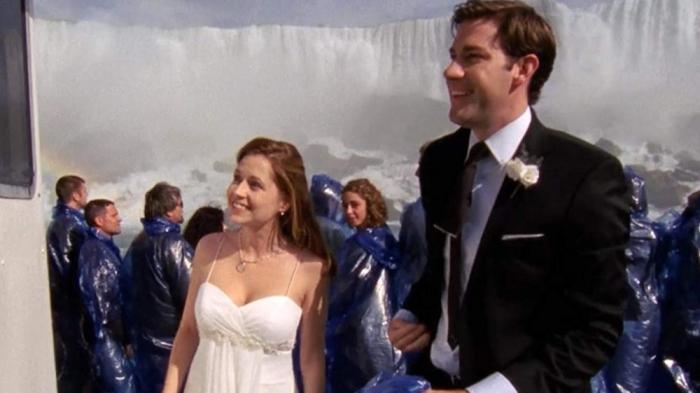 Recall that the sixth season episode of The Office featuring the wedding of Jim and Pam took place at Niagara Falls. There’s a fun story in Greene’s book about how John Krasinski, Jenna Fischer, and a small crew actually flew to Niagara to get that shot, but had to do so by getting on a tourist boat. On the first take, they were absolutely drenched. On the second take, however, the captain of the boat agreed not to get so close to the falls, reasoning that the tourists would never know what they were missing, and even if they did, they wouldn’t care because they’d get to see a taping of an episode of The Office.

In any respect, it’s a darling episode that sees Jim and Pam have a separate wedding at Niagara Falls in anticipation of Michael Scott and their Dundler Mifflin co-workers deciding to “ruin” their wedding by stealing an idea from a viral video.

In the original draft of that episode, Greg Daniels has a completely different idea that would have sunk an otherwise perfect episode. “Originally, it was supposed to be that Jim and Pam were in the middle of their ceremony, and Roy was haunting around and regretting that he let her go and wanting her back,” Paul Feig says in Greene’s book. “When they are in the middle of the ceremony, it’s supposed to be that Roy rides in on horseback dressed like a white knight to win her back.”

In the draft, Roy apparently decides that Pam’s decision to marry Jim is really just a ploy to make him jealous and win her back. All he needs, he thinks, is a big grand gesture, so he rents a white horse. Obviously, the ploy doesn’t work, and when Roy sees that Pam is pregnant, he realizes he is deluded and slinks away on his white horse.

Now, here’s where the episode draft goes from, “Oh no,” to “What the hell were you thinking?”

“Then Greg came up with an idea where Dwight has an obsession with [Niagara Falls] and some sort of suicide gene, and he fights the urge to go over the falls the whole episode,” Paul Feig says. After Roy leaves with the horse, Dwight stumbles upon him, takes the horse off of Roy’s hands, and ends up riding the horse into the Niagara River.

Dwight, however, bails off the horse and swims to shore. Meanwhile, elsewhere near the Falls, Jim and Pam are having a romantic moment on the boat, and “in the background, we see a white horse tumbling over Niagara Falls, plunging 600 feet.”

Can you imagine at this moment seeing a white horse plunge over the falls? 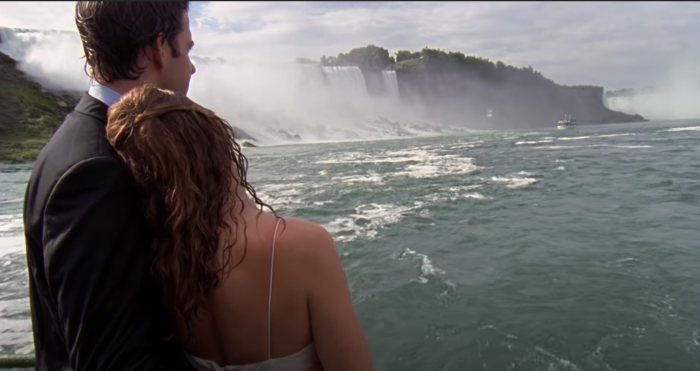 The writing staff revolted and sought out Paul Feig to help them convince Daniels to drop the idea. “You can’t kill a horse,” they said. “It’s crazy.” Greg Daniels, however, insisted it would work and dug in, even as everyone else continued to freak out. “So many people were against it, including Steve [Carell]. People at the table read were very, very concerned about it.”

Eventually, it was Carell himself who talked Daniels out of it. “Guys, I love the episode,” he told Daniels and the other writers, “but you can’t throw a horse over Niagara Falls.” Carell insisted that it was “really an animated joke, a cartoon joke, a joke we might see on The Simpsons. I know many people who already think that The Office has jumped the shark in many different ways, but let me just say that throwing a horse over Niagara Falls is really jumping the shark. I’m not in favor of this.”

And that was it. Daniels finally relented, which is when they quickly threw together another idea, borrowing from the YouTube dance number. The rest is history.

Source: The Office: The Untold Story of the Greatest Sitcom of the 2000s: An Oral History

← The President on a Projected 3,000 Daily Deaths, Basically: 'It's Merely a Flesh Wound!' | Briefly: The Treasury Secretary's Attempt to Own Guns 'n Roses Lead Singer On Twitter Backfires Spectacularly →