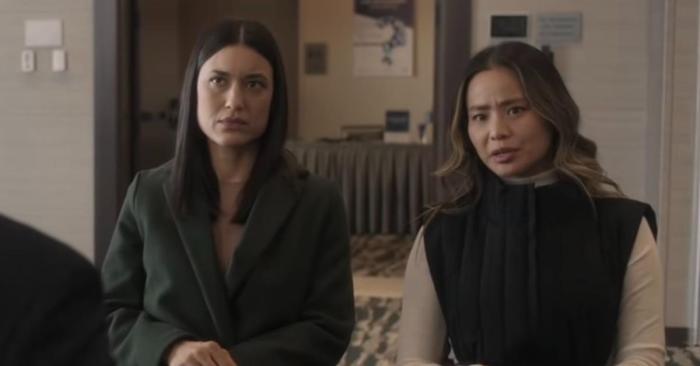 It’s the golden era of revivals. Halloween, Scream, And Just Like That; all works that scape our favorite characters out of retirement to continue and expand their stories. Among them, Dexter: New Blood, the next collection of ten episodes that rescues the Dark Defender from a blistering cold end. Knowledge of Dexter: New Blood had fans clamoring for more of what they love, and that’s not just as simple as a blood thirsty knife wielder stealing life through plastic; they wanted more of The Trinity Killer.

Earlier this year, John Lithgow, who played Trinity, was confirmed to be returning to the series revival. With Trinity dead and buried (at sea), it’s a mystery as to how the late killer could pose any relevance to the new story in a way that was devoid of plot contrivance. Enter Merry Fucking Kill.

The third episode of Dexter: New Blood introduced Molly Park (Jaime Chung), a true-crime podcaster who took interest in the case of the missing and presumed dead, Matt Caldwell (Steve M. Robertson). Matt was, of course, murdered by Dexter (Michael C. Hall, now in disguise as Jim Lindsay), but his father has been insisting he’s still alive. Park arrives in Iron Lake looking to investigate Caldwell but ends up digging some roots when stumbling across Chief Angela Bishop’s (Julia Jones) work searching for missing women and girls. Bishop can’t find a link between the cases of missing runaways, but her gut tells her there is one. Bishop has been left on her own to investigate since other law enforcement has been unable or unwilling to find a link between the cases. Park reignites Bishop’s fire, looking to team up to investigate the missing women.

Park is a likely partner for Bishop, fancying herself the version of a civilian detective who brings focus to stories people ignore. Specifically, Park has thoughts on misogyny in law enforcement. In between episodes four and five of the show, a bonus episode was dropped on Executive Producer Scott Reynolds’ podcast Dexter: New Blood Wrap Up. The basket of easter eggs was the full-length (about eleven minutes or so) episode about Trinity, the same episode Harrison (Jack Alcott) is seen teeing up in episode four (H is for Hero) before the incident at the school. In the minisode, Park latches onto the fact that it took the police too long to spot a pattern in Trinity because the first two victims in each of his cycles were women, and their deaths were ruled suicides and not investigated further.

“What’s totally messed up and completely misogynistic about these kills, for years on end, homicide cops would come to the scene of the crime, find these women laid out in their tub, sometimes left there for days on end, and call it suicide, ‘cause you know, women be crazy.”

This unexpected beat connects the fan-favorite season of Dexter to the revival; much like Trinity, the missing women near Iron Lake have not been investigated as a pattern because of systemic misogyny. Though the missing women in Dexter: New Blood are not all indigenous, the show dances with themes of missing and murdered indigenous women and even has Audrey Bishop (Johnny Sequoya) don an MMIW shirt, and Angela Bishop referencing her missing friend.

It’s this that brings Park and Bishop together, and what connects old seasons to Dexter’s new story. Trinity’s relevance to these new episodes arises from the lack of law enforcement investigations as a result of systemic misogyny. It also might be the thing that gets Dexter caught.

After the two gals decide to team up to investigate the missing women, while staying on top of the mystery of the missing Matt, they venture to the city to check on Matt’s location. There, they pop into a law enforcement conference about finding patterns in seemingly unrelated cases. Bishop hopes to gain some insight into how to connect her wall of murders from one of the experts who worked alongside those who tracked Trinity: Miami Metro’s own Angel Batista (David Zayas). Angela sits down with Angel, excuse me, Bishop sits down with Batista, and they discuss the gut feeling at the core of finding connections between victims. Batista gives Bishop some sage advice before mentioning the wonderful officer who discovered the Trinity M.O., Debra Morgan (Jennifer Carpenter). Batista suggests that Bishop trust her gut in the way that Deb did, further expanding on themes of women’s intuition and the need for women advocating for themselves in areas like law enforcement (a relevant holiday season theme as the core of Black Christmas).

It was possible the return of the Trinity killer would be via an apparition reiterating his speech about Dexter faking his own death but never being able to change. In Trinity’s last appearance, Dexter stands over him with a knife, and the two exchange words:

Dexter: What’s the alternative, Arthur? Leave? Disappear? Fake my own death and start over again?
Trinity: No, you’ll still be you.

But the new context brought on by Merry Fucking Kill scrapes the connective tissue between Trinity and the Dexter: New Blood baddie. The thread of disregarding women’s deaths because of systemic inequality is an unexpected link between Dexter’s life in Miami and Jim Lindsay’s life in Iron Lake. What’s more is that this thread connects Iron Lake PD to Miami Metro Homicide and might be the very thing that gets Dexter out of the cold and into some hot water.