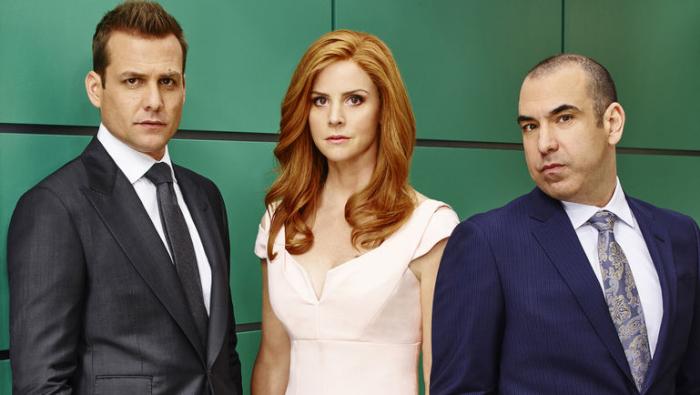 As USA Network's 'Suits' Concludes, So To Does a Television Era

We have lived through the Golden Age of Television and the Peak TV era, but few give proper due to the “Characters Are Welcome” era of television. I’m being a wiseass, but also, I’m not. There was a lot to be said for the slight but entertaining hour-long dramas of the USA Network of the aughts and early 2010s, which offered a nice reprieve from the otherwise more serious-minded cable television fare. Shows like Monk and Psych, Royal Pains, White Collar, In Plain Sight and Burn Notice were nice little antidotes to the world around us, middle fingers to the Six Feet Unders, Breaking Bads and The Wires of the TV landscape. They were politics-free, they contained no social messages, and they had no interest in saying anything of substance. You could check-in and check out anytime you wanted, and you’d never miss a beat. USA Network, of course, popularized this brand of television, but you could get plenty of doses of it on TBS and TNT, as well, on everything from Raising the Bar to Rizzoli and Isles, Memphis Beat, and The Closer. A lot of those shows we also binged the old-fashioned way: By ordering 2 DVD discs at a time from Netflix and then waiting two days to get the next batch of episodes in your mailbox.

For better or worse, however, “slight but entertaining” programming has fallen out of favor, and I understand why. I do not begrudge USA Network (or TBS/TNT) for their decision to go a different direction, better readying themselves for the streaming era of television in which shows must be alluring, addictive, and often important enough to attract subscribers willing to shell out $5-$15 a month. I loved Psych, but I don’t think I loved Psych that much.

Meanwhile, in less than two weeks, Suits will air its series finale, the tenth episode of its ninth season, bringing to a close not only this series but officially the “Characters Are Welcome” era of the USA Network. Inexplicably, Suits is the only holdover from that era, although there is a Suits spin-off series currently on the network. Pearson, however, is not the same: It’s dreary and humorless, and as much as I love the Jessica Pearson character, asking the creator of Suits to create a drama befitting this era of the network is a bit like asking Ronald Moore to create a PG-version of Outlander for the Disney Channel. The only thing good about Suits is its throwback sensibility, and without it, Pearson is a paper-doll of a show.

Believe it or not, there was a two-year period in which Suits was actually critically well-received (and not just by me! Matt Zoller Seitz loved it! And so did Mo Ryan!) It has long since lost whatever it was that made it “great,” but it is still a passably entertaining series, and at this point — nine seasons in — those of us who are still on the train are staying on the train, even as it trudges into the station halfway off the track and missing half its wheels. Besides, it gives us something to talk about with our grandparents.

For the unfamiliar, Suits has nothing to do with actual suits: It’s sort of a legal dramedy, although it quickly gave up its procedural format early on, likely because creator Aaron Korsh doesn’t know sh*t about the law (he’s from the Wall Street world). For a show about lawyers, Suits almost never goes inside a courtroom: Its original focus was on Harvey Specter (Gabriel Macht), a “closer,” who was great at negotiating settlements, and his mentor, Mike Ross (Patrick Adams), a guy with a photographic memory who managed to lie his way into a career as a lawyer despite having never gone to law school (he was finally imprisoned for this in season seven, although when he got out of prison, he went right back into the practice of law despite the felony and the fact that he still has never attended law school). Suits is about a law firm that forces people into settlements, which honestly would be a more realistic glimpse of the practice of law were it not for the fact that the lawyers on Suits never cite case law. Every episode of Suits is a dick-measuring contest between alphas. It’s never been about who is the smartest person in the room; it’s always been about who could flex the most. For nine seasons, it’s basically been an endless series of threats: “I will destroy you.” “No, I will destroy you.” The last three or four seasons, the show has also introduced swear words, and the series has always been good at including one obvious pop culture reference in each episode and then explaining that reference to the three people who have never heard of The Godfather or Shawshank Redemption.

But if there’s a thematic throughline over nine seasons of Suits, it’s “loyalty.” It’s like The Fast and the Furious franchise in that way: “It’s all about the family.” Basically, every episode entails two employees of the firm getting into a squabble with each other but coming together when confronted with an outside threat. It’s essentially the, “I can make fun of my dumb family member, but you can’t make fun of him” of legal dramas. There’s also a Ross and Rachel of Suits in Harvey and Donna (Sarah Rafferty), who have spent the better part of the series going through the will they/won’t they motions, although there has never been a doubt that they invariably would.

The show has seen a lot of cast upheaval over the years, too. Gina Torres left a few seasons ago, followed by Patrick and Meghan Markle (the latter to join the British Royal family), although they have found suitable replacements in Dule Hill and Katherine Heigl, who is kind of perfect for Suits because it asks her to lean into her public persona. Wendell Pierce has also been written out of the final season (save for one appearance) due to scheduling conflicts. Louis Litt (Rick Hoffman), meanwhile, has remained, the insecure, inadequate, and petty beating heart of the series, while Donna Paulson is the series’ grounding force. Amanda Schull’s Katrina Bennett has been a regular presence the last five seasons, but bless her, that character is mostly an afterthought, an occasionally necessary character in a C-plotline.

As we head into the final two episodes, the law firm — as usual — is experiencing some internal difficulties, after the New York bar handed control of the firm to Faye Richardson (Denise Crosby), who is given the power to make all the decisions for the firm. She’s there to ensure there are no more ethical violations (the firm’s bread-and-butter) while the firm itself is trying to oust her. Meanwhile, she’s fired partner Samantha Wheeler (Heigl) over an ethical violation, but Samantha is suing the firm. Harvey and Louis will be asked to defend Faye against one of their own. At the end of the most recent episode, we also learn that Harvey’s mother has died, which gives Mike Ross another chance to return for the funeral. Meanwhile, Louis Litt is now engaged to Sheila (Rachael Harris), who is pregnant with his child, setting up what will likely be a final episode that will include both a wedding and a birth. The important thing, however, is that Harvey and Donna are finally together and cohabitating, and one shouldn’t dismiss the idea of a double-wedding in the series finale, because that’s the kind of show that Suits is.

There are two episodes left, and when Suits ends on September 25th, so does a certain brand of television show. I’ll be sad to see it go, but I won’t exactly miss it. It’s time for both Suits and the “Characters Are Welcome” era of USA Network to come to a close.

← Italian Artist Maurizio Cattelan's Infamous Gold Toilet Arrives in England | Who Is Briscoe Cain and Why Does He Want to Shoot Beto O'Rourke? →