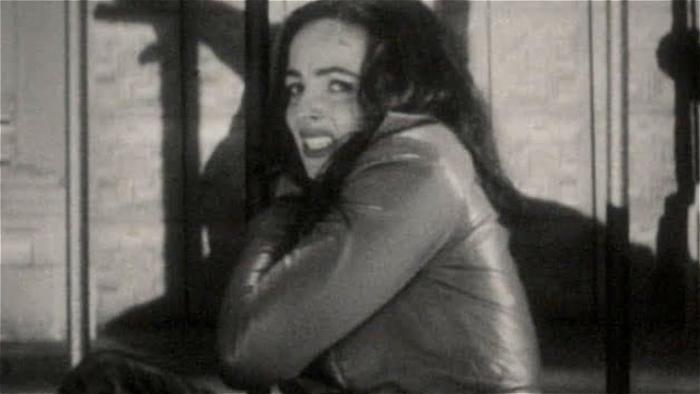 There’s something to be said for the classic horror movies of the Hammer Films era. By today’s standards, they’re tame, despite all the boobs and practical effects. But what they lack in genuine chills is balanced by fantastic sets, spooky atmosphere, and performances by genre greats like Peter Cushing and Christopher Lee so hammy they’re proscribed by several major religions. The MCU’s latest pays homage to the schlocky horror of yesteryear with Werewolf by Night, a mostly successful black & white one-shot that clocks in at just over 50 minutes.

The Bloodstone family has just lost its patriarch, Ulysses (Richard Dixon), an unpleasant man who ran a group of loosely-affiliated monster hunters. With the help of his widow, Verussa (Harriet Harris), his taxidermied corpse instructs 5 of the greatest hunters to find and slay a mysterious beast set loose on the manor grounds. Whoever does so will receive the Bloodstone, a mystical artifact that can control monsters while granting its wielder increased physical traits and longevity. Ulysses’ estranged daughter, Elsa (Laura Donnelly, The Nevers), also takes part in the challenge. Together with Jack Russell (Gael García Bernal, Mozart in the Jungle), seemingly the least dangerous of hunters, Elsa is determined to take possession of the Bloodstone and end her family’s influence.

Werewolf by Night is a lot of fun and a mostly successful homage to classic horror and Marvel’s own back catalog of one-shot comics. The soapy script fits the proceedings very well, and the cast eats it up. None of the hunters are canonically Marvel characters, apart from Jack and Elsa, so they’re excellent cannon fodder. The most interesting of these is Jovan, a burly Norwegian played by Kirk Thatcher, a longtime writer and director of various Muppets productions who is clearly having fun in his brief role. García Bernal does a great job of playing the unassuming Jack Russell, right up until his secret is exposed and his quiet turns into panic. Laura Donnelly’s Elsa is much like her role as Amalia True; not a bad thing, since I have my doubts HBO will ever release another episode of The Nevers. The “monster,” charmingly named Ted, is a CGI monstrosity Marvel readers will love but is likely lost on more casual viewers. He looks as real as Groot, and is a charming addition to the MCU. None of these characters get much time to shine; the 50-minute runtime is just enough for the story, and lacks the usual filler. We know enough to get by.

Visually, Werewolf by Night struggles to recapture the feel of Hammer Films with mixed success. They’ve got the general look down; there’s a great deal of grain to the low-light proceedings, and they even put in the cue marks in the upper right corner. But things look a bit artificial, as the show was clearly shot digitally and the grain added in post. Super helpful for taking screenshots, btw. Camerawork shifts awkwardly from the atmospheric landscape shots and odd-angled character closeups of the genre to the typical quick cuts and green screens of a Marvel property. It’s not terrible, but it is obvious and distracting and I wish they’d gone a more traditional route. But it’s a minor quibble about a fun production. The violence is significantly more graphic than most MCU shows. One dude gets a crossbow bolt through the face; another gets their head split with a sword. It’s relatively bloodless and the monochrome makes it less shocking, but it’s still brutal for Disney+.

Casual viewers might wonder where Werewolf by Night fits in the MCU, and that’s fair because it’s not at all clear. Director Michael Giacchino has refused to say exactly when it occurs, other than to confirm it’s part of the Marvel-616 continuity. Jack, Elsa, and “Ted” may appear in other Marvel productions. In fact, I wouldn’t be surprised if one or more is in next year’s Agatha: Coven of Chaos spin-off from WandVision that brings back fan favorite Agatha Harkness (Kathryn Hahn) for her own miniseries. They fit thematically, and WbN has proven very popular. But I wonder if WbN is intended as a prequel for an unannounced Midnight Sons project. This mysterious band of mystical Marvel heroes has often faced off against the more spiritual antagonists of the Marvel universe, including Mephisto, Zarathos, and Lilith, the Mother of Demons. Members came and went, but included Dr. Strange, Wong, Morbius, Logan, Blade, Wanda Maximoff, various Ghost Riders, and Jack Russell, Elsa Bloodstone, and Man-Thing. Most of those characters have either recently been in Sam Raimi’s very horror-themed Multiverse of Madness or have upcoming projects in Marvel Phase 5. There’s also a multiplatform Midnight Sons game from 2K coming out later this year. Coincidence? I think not. I know Marvel’s propensity for announcing all their projects well in advance, but if there was ever a property that demanded secrecy, it’s the Midnight Sons. It’s probably just hopeful thinking on my part, but a man can dream. Multiverse of Madness was the most unique movie to come out of the MCU in years; Werewolf by Night is its small-screen equivalent. So yeah, I think a Midnight Sons movie or miniseries is a definite possibility.

Werewolf by Night is good campy fun, introducing several second-tier Marvel characters most of us never expected to see on the screen. Violent and with just enough chills to make it suitable for the 12-and-up crowd, it’s the kind of one-shot that requires no previous knowledge of the Marvel universe to entertain, with enough easter eggs to keep longtime Marvel readers feeling smug. Elsa, Jack, and Ted are a lot of fun and with any luck we’ll see them all again soon.