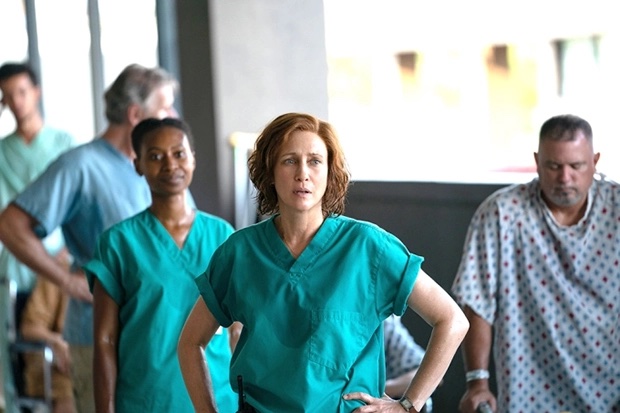 How Do You Recommend a Show Like Apple TV+'s 'Five Days at Memorial'?

A frequent response we get to reviews about television shows or movies that are depressing, or harrowing, simply too hard to watch is something along the lines of, “This sounds good, but I don’t have it in me to watch.” I can relate to the sentiment, and if your entertainment hours are limited, why spend them watching something that will leave you feeling upset or melancholy or under a desk in a fetal position with a bottle of wine?

I don’t know how to answer that, and I also don’t know if Five Days at Memorial is a series that I’d recommend any more than I’d recommend Dear Zachary. However, the fact that so many people reading this will understand the Dear Zachary reference is a testament to our willingness to wade into the “entertainment” of misery.

Is Five Days at Memorial — a docuseries starring Cherry Jones and Vera Farmiga, among others — any good? I don’t think that’s the right question. Is it worthwhile? Maybe. Will it open your eyes to the horrors of a real-life event in our not-too-distant past? Yes it will. Is that a good thing? If you’re in a position to ensure that something like the events in Five Days at Memorial never happens again, then yes. It should be required viewing for anyone in the Department of Homeland Security, in the insurance industry, for anyone who runs a hospital, or is a city planner or engineer or in charge of emergency planning. Given the increase in weather-related disasters worldwide, something like this will inevitably happen again, and if it does, I hope to God we’re better prepared for it.

For those who don’t know, Five Days at Memorial — based on the nonfiction book of the same name by Pulitzer Prize winner Sheri Fink — tracks the five days in New Orleans’ Memorial Hospital after Hurricane Katrina. The short version is this: The hospital did not evacuate ahead of the storm. In fact, a lot of people sought shelter in the hospital. There was damage to the hospital, but they survived the hurricane. Then came the flooding.

There were a few hundred patients — many of them critically ill — who were trapped in that hospital. As we know, it took days for the Bush Administration, the National Guard, Homeland Security, and others to do anything about it. There was no plan, and a lot of people — largely people of color — were left to fend for themselves.

As the waters continued to rise in Memorial Hospital, the power went out. The AC went down, and it was miserably hot. The plumbing stopped working. The machinery required to keep patients alive stopped working. They ran out of fresh water and food. Doctors and nurses worked nonstop for five days, first to keep their patients alive and then, eventually, to evacuate them. The conditions were intolerable for any place much less a hospital. A number of people died, of heat stroke, or because they couldn’t get the necessary medical attention required for survival. The doctors and nurses — whose jobs it is to save the lives of people — had to watch helplessly as their patients lost their battles.

But the doctors and nurses were heroic. They did save a lot of lives. They did keep a lot of patients alive long enough to be evacuated, and they transported those patients one-by-one through a parking garage and up flights of stairs in the sweltering heat on 40-minute journeys over five days to a helipad where they were evacuated. All of that heroism makes what came next a pill all the more bitter to swallow.

Each episode of Five Days at Memorial tracks a day of the actual event. But the series is eight episodes long. Here’s a spoiler for what transpires after the fifth episode (which aired last week): There’s an investigation into the doctors by a lot of armchair quarterbacks in the same government that allowed all of this to happen in the first place. Again, spoilers and trigger warning, because what happened is upsetting: After five days, the National Guard finally came in and forced an evacuation of the hospital. They said that everyone had to be out by 5 p.m., including all the doctors and nurses. Anyone who wasn’t evacuated would be left behind.

There were a number of critically ill patients who could not be evacuated in time. These people did not have long to live in the best of circumstances. The doctors had to make a choice — and this is hard for me to even write about — between leaving them behind in their beds in the heat without food or water to die a slow death over the course of hours or days, or to humanely end their lives.

There was an investigation, so you can probably guess which direction one or two doctors and nurses, in particular, took. You can probably guess that folks in Baton Rouge and Washington D.C. who only had to watch what happened on their television screens from their air-conditioned offices had a lot of opinions about the choices that were made. These doctors were forced into no-win situations and judged for their actions by others with the luxury of not having to make those decisions.

That brings us back to our original question: Is Five Days at Memorial worth recommending? Do you like to wrestle with impossible moral conundrums? Do you want to stare horror straight in the eye? Do you want to spend five hours watching people go through the worst kind of misery imaginable and then another three watching those same people be second-guessed for their response? I am personally glad that I watched it. However, as well done as it is, I wouldn’t wish the viewing experience on my worst enemy.

← Jake Gyllenhaal's Pivot to Action Hero Roles Is Confusing | 5 Shows After Dark: 'The Patient' Premiere FX on Hulu, 'What We Do in the Shadows' on FX →