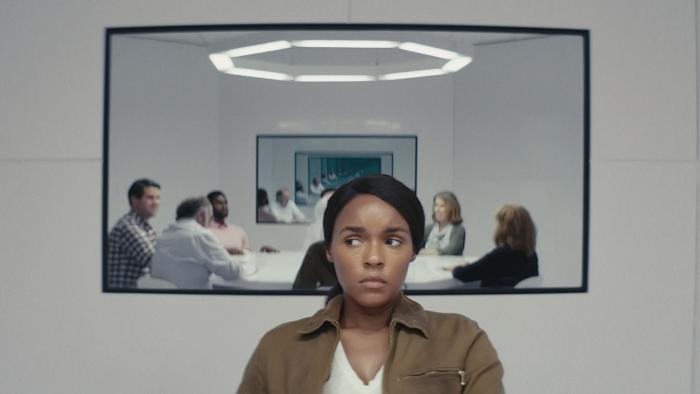 Don’t blame Janelle Monáe for the mediocrity of Homecoming, which returns to Amazon for season two without its original star, Julia Roberts, or the director of its first season episodes, Sam Esmail. Don’t blame returning actors Hong Chau and Stephan James, or newbies played by Joan Cusack and Chris Cooper, either. The performances are terrific, and the direction remains as Hitchcockian and as stylish as the first season.

It’s the story that’s flat in season two, which doesn’t build a mystery so much as it artificially creates one by playing with time. It’s a fairly straightforward story that is aired out of order, where we are dropped disorientingly into the middle of the story and left to figure out where we are, especially in relation to season one.

The middle of the story is a rowboat in a lake, where Jackie (Monáe) wakes up. Looking ashore, she sees a man scurry away. Jackie has no memory, either of how she ended up in a boat or of her own identity. Over the course of the next two episodes, she tries to piece together clues about her identity and who conspired to wipe her memory. She gets as far as learning that there is a connection to the Geist Group before the series jumps back in time and fills in all the gaps.

I won’t spoil what little mystery there is here, except to say that Walter Cruz (Stephan James) — the soldier experimented on in the first season — is still trying to figure out why he lost his memories. He and Jackie cross paths, although season two is largely centered on Jackie, which is unfortunate because Walter is both the primary throughline between both seasons and pushed into the background of season two.

Audrey Temple (Hong Chau), who played a receptionist in the first season, figures much more prominently in the second season. She’s an ambitious employee of the Geist Group, the company behind the manufacture of the experimental drug used in the first season to erase traumatic memories of soldiers who return from combat with PTSD. She works for Leonard Geist (Chris Cooper), the CEO of the Geist Group, who is not only uneasy about how his product is being used, but also wary of the U.S. government and conspiratorially minded. That’s for good reason, as it turns out, and I won’t say anything beyond that, except that Joan Cusack is very good in this role.

And yet … I can’t help but think that season 2 of Homecoming is less an impressive knot and more a piece of string writer/creators Micah Bloomberg and Eli Horowitz cut up and re-ordered to give the illusion of a mystery. The first season was a nifty little puzzle box, while season 2 zig zags toward something akin to a Mexican stand-off. It’s not bad; it’s that it is so slight as to be unnecessary.

← Don't Be Fooled: Piers Morgan's Sudden Political U-Turn Is All About Looking Out For Piers Morgan | So Much Grief →