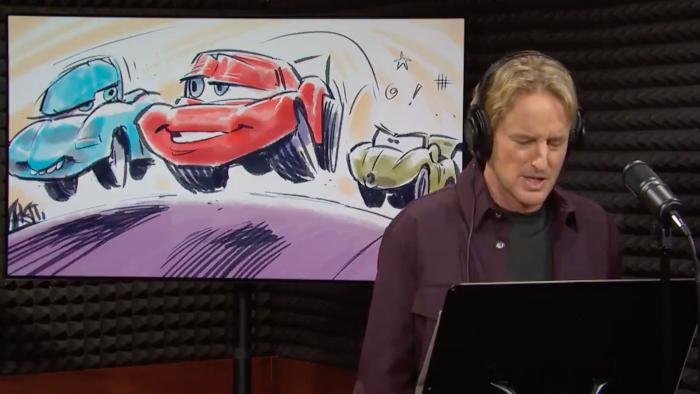 Cold Open — Welcome to the 47th season of SNL! You have no idea how excited I am to be recapping another season. Seriously. During the last couple of months last season, my son helped out with the scoring, and he’ll continue to do so this season, which would otherwise result in slightly higher scoring, except the season premiere was a stinker, unfortunately.

In the cold open, they got one of the new guys — please don’t ask me to know his name yet, but it’s the guy who was described as a “master impressionist” — to play Biden. Cecily Strong is Kyrsten Sinema, Aidy Bryant is Joe Manchin, Ego is Ilhan, Melissa is AOC, and Pete is Cuomo. Biden brings the two sides together by … not bringing them together at all. Cecily is a perfect Cruella Sinema. I’m not sure about the new guy, but it’s nice to see a Cold Open with no celebrity cameos. (Score: 6.5 out of 10)

Owen Wilson Monologue — Owen Wilson gives an amiable, self-deprecating monologue — mostly making fun of himself and his occasional tendency to coast in his career — and it’s not bad! He didn’t sing! There were no additional cameos or questions from the audience (although, his two brothers were in attendance). That’s a win! (Score: 6 out of 10)

The Talking — The Talking seems to be some sort of cross between The Talk and The View, where all the women bicker, and Owen Wilson plays a doctor who reveals on air that they have COVID while also asking invasive questions. Not good. (Watch Here) (Score: 3.5 out of 10)

Star Trek: Ego Quest — Star Trek with Jeff Bezos (Wilson) as the Captain (and Luke Wilson plays Jeff Bezos’ brother). Mikey Day’s Elon Musk plays the villain, and this is somehow less funny than the Jon Stewart parody of the same thing two months ago. Not a great start to the season here. (Watch Here) (Score: 2 out of 10)

School Board Meeting — During a school board meeting, a group of parents (and non-parents) say a lot of crazy things, but somehow not as crazy as much of what we have seen at actual school board meetings. Like Trump, school board meetings are parody-proof. I think they do manage to get nearly every single cast member (except Che and Jost) into the skit. Also, McKinnon doesn’t appear to be around tonight — must be off shooting that Tiger King series. (Score: 4 out of 10)

Cars 4 — Owen comes in to record a few lines for >Cars 4, and Lightning McQueen delivers some very inappropriate lines. It’s either really funny, or it just feels like it because the rest of the show has been so bad. Either way, this is the Mat sketch of the night! (Score: 7 out of 10)

Weekend Update — Colin and Che are clearly still warming up, although they have a lot of groaners. Ego plays a Black woman who has been missing for ten years, and she’s terrific (and has a nice jab at Che), while Pete Davidson gives his thoughts on the MET Gala, but mostly tells some stale jokes about Top Gun being gay. In the end, however, “Update” salvages itself with a nice tribute to Norm Macdonald. (Score: 7 out of 10)

Miriam Lewis Funeral — A lounge singer attends a funeral to sing the deceased’s favorite son, “I Believe Can Fly,” by R. Kelly, and the attendees debate whether it’s appropriate to sing her favorite song while we see a slideshow of her with her favorite celebrities (Trump, Louis C.K. Cosby, etc.). Ooof. (Watch Here) (Score: 3.5 out of 10)

Fox NFL — During an NFL game, the two announcers repeatedly have to do a promo for Fox’s new show, Crazy House, which actually gets funnier and more absurd as the sketch goes on. (Score: 6.5 out of 10)

Splitting the Check — A group of colleagues get together for dinner, and they try to split the check, and Owen Wilson’s character apparently ordered everything. Then it gets weird about a map for the Holy Grail or something and becomes a commercial for Indianapolis Bones. Ugh. (Watch Here) (Score: 3 out of 10)

Mail-in Stool Testing Commercial — This one features one of the new cast members plus Andrew Dismukes, who no one remembers from last season. Anyway, the joke is that maybe they play around with the stool and mess around with it a little. There is an occasional chuckle for scatological humor, but this one isn’t good, either. (Watch Here) (Score: 4 out of 10)

Side note: In college, I worked at a grocery store, and every single time a product had a missing barcode, the customer would joke, “I guess that means it’s free!” as though they were the first person to ever say it instead of the 17th person to say it that day. The same goes for any commenter who says, “This show is still on?” or “People still watch SNL?” or SNL hasn’t been funny in years!” Don’t be that guy!