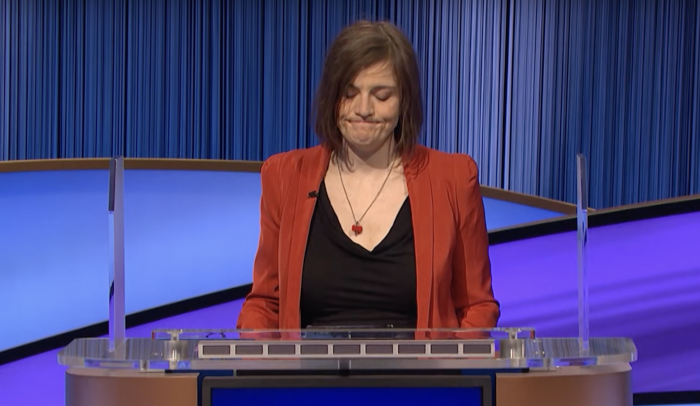 This week is the first batch of shows taped since Ken Jennings was named permanent co-host (along with Mayim Bialik), and it didn’t take long for some drama to surface. In last night’s episode, two-time Jeopardy winner Luigi faced off against April and Justin.

We’ve seen players lose the game a million times in Final Jeopardy because of missed questions, but what you rarely see is a player who goes into Final Jeopardy ahead of the other two, answers the question correctly, and still loses the game. That’s exactly what happened to April, who managed to pull ahead of returning champion Luigi by answering the final question of Double Jeopardy correctly.

Up by $800, a correct answer would have seemingly given April an easy victory. Unfortunately, she wagered incorrectly by accident, and she knew it, but only after her wager had been locked in. As a result, she lost badly, and a very lucky Luigi managed to move on thanks to an error in math.

So, what the hell happened? April took to Reddit to explain.

My wager was a huge mistake. I was confident in the final category, too! I intended to cover Luigi’s potential final total by a dollar, but I lost perspective while I scribbled on scratch paper. Soon after I submitted my wager, I realized I’d messed up. Filming hadn’t resumed yet but I was stuck. As you may know, on a contestant’s screen, there’s a confirmation button by the wager box and once you tap that button, the wager’s locked in with few exceptions. We were sufficiently warned. I’d made an unforced error and I was gutted. I left the studio lot with my scratch paper and took [a] picture of it later. The arrows point to my flawed wager (1,801) and what I could’ve wagered to win (14,800). I’d practiced wagering before the show but not nearly enough. I devoted way more time to cramming trivia, not just to win, but also to avoid embarrassment on national TV. Didn’t work out! Shoutout to the compassionate contestant coordinators. The audience was supportive when I was about to leave the studio, which meant a lot. I later apologized to the mighty Luigi if I hadn’t clapped for him.

Here’s a pic of the scratch paper, where it’s apparent she just had a brain fart. I think she figured out that if she wagered it all, she’d win by $1800. Instead of wagering it all, she accidentally fixated on the $1800 figure and simply added $1, only realizing her mistake after she had locked the wager in. 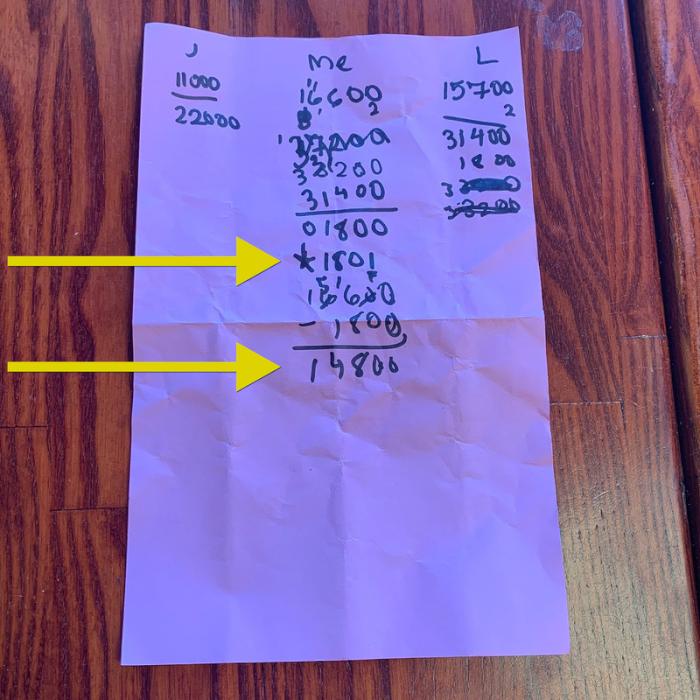 Another Redditor, who was in the audience for the match, actually had an interesting behind-the-scenes look at what happened. Basically, contestants get five minutes to work out their wager. Once their wagers are locked in, or five minutes has elapsed, they cannot make any changes. April realized her mistake after she’d locked her wager in, and she was visibly upset upon realizing her mistake. From eaglebtc:

The taping ground to a screeching halt. No one in the audience understood what was happening. The production crew did not make any attempt to distract from the situation, and Ken seemed unsure of how to handle it since this was only his first day taping with a full audience. The contestant coordinator spent several minutes with April doing some light tai chi and breathing exercises to help calm her down. What must have felt like an eternity to April only lasted 10 minutes, but in the world of TV production this is still unusually long not to be doing anything.

The problem only started to become clear to the audience when the [Final Jeopardy] responses and wagers were revealed. April was ahead of Luigi, and she had the correct response, but she made a fatal miscalculation in the wager. April hangs her head at the end of the game. I think it’s because she was trying to grapple with some feelings of deep regret and embarrassment at the blown opportunity to knock [Luigi] off his throne, especially since April was ON FIRE in the second half of the round. You could tell that her $5,000 Daily Double response put a lot of wind in her sails, and she seemed nigh unstoppable. The air in the studio was ELECTRIC when April got that last clue and squeaked into first place.

She stayed on stage for the postgame chat. Ken avoided asking her questions, probably to keep her from getting too upset since they also film this portion for the credits sequence.

It was a painful loss for April, but at least she might be able to return in Second Chance tournament.

← Michael Rapaport's Lawsuit Against Barstool Sports Has It All: Herpes, Sodomy, Stalking | This Will Please Fans Ticked Off Because NBC Cut Away from Ozzy Osbourne's Halftime Show →