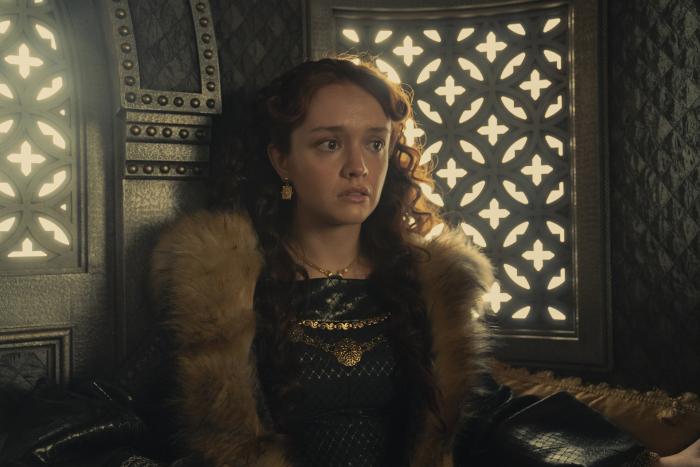 Few things bring people together like the loss of another person. Family members strewn across various regions, with their own customs and habits, must cope with one another long enough to put the dearly departed to rest. Unfortunately, this sort of close proximity can be a recipe for in-fighting and drawing lines in the sand even among common folk. For the royal family of Westeros, it’s an absolute powder keg. What begins as a somber occasion infused with the quiet drama of everyone knowing one another’s secrets but pretending otherwise becomes an explosive conflict in which the polite subterfuge is dropped and certain people’s true selves are revealed.

From the moment Daemon starts openly giggling over Vaemond’s (Wil Johnson) thinly veiled condemnation of Rhaenyra’s children during his wife’s eulogy, things begin to go downhill. But as much as the boys’ lack of Velaryon blood may rankle many family members, especially Rhaenys, it changes little. Surprisingly, it’s Corlys who’s able to maintain a level of objectivity over the situation, his naked ambition leaving him to instruct that “history does not remember blood, it remembers names.” But ambition isn’t his sole motivation; there’s no need to lose anyone else with the Velaryon name, especially since he seems fond of Rheanyra’s two boys regardless of the lack of blood ties.

Family is never too far from Viserys’ mind. Over the ten years since Daemon’s (second) exile, Viserys’ anger has had time to cool. But Daemon turns down the offer to return to court, because unlike his brother, Daemon is more than capable of nursing a grudge and is loath to return to the world of politics. His heated rejection wounds Viserys, and as he walks away, whether it’s absentmindedness or a symptom of his already dire condition becoming neurological, he tells Alicent on his way out, “I’m going to bed, Aemma.” Oof. Just another tick mark on the list of resentments that Alicent holds so tightly to herself.

Alicent becomes the subject of discussion as Daemon and Rhaenyra walk along the shore. Despite the bad blood between them, Rhaenyra can’t bring herself to believe that Alicent had Harwin and his father murdered. It’s an important moment because not only does it provide a benchmark for the state of their current relationship, i.e. a power struggle that hasn’t escalated beyond insults and manipulative tactics, but it also provides a set up for the shocking confrontation that occurs later. Daemon is more doubtful, but the conversation soon turns towards what the entire season has been heading towards thus far: Rhaenyra and Daemon’s relationship. I wish the tension between the two was drawn out a little further because when they finally do make love, it feels like less of an “at last” sense of passionate release as much as it feels like merely the fulfillment of a longstanding expectation.

During this time, the dragon-obsessed Aemond, Alicent’s withdrawn but astute youngest child, cannot resist seeking out Vhagar. After nearly getting a faceful of dragonfire, Aemond climbs onto the enormous dragon and effectively becomes Vhagar’s new dragon rider. Understandably, this is an issue for Baela and Rhaena, who are still fresh from the shock of their mother’s death and fully intended for her dragon to remain within their family. “She was mine to claim!” Baela cries out, to which Aemond, now confident and far more terrible, taunts that the small girl should have done it first and suggests a pig instead (when the bullied becomes the bully, they’re quick to use their previous experiences against others). That’s all it takes for a fight to break out among the children, as Jayce and Luke side with their Velaryon cousins. It’s vicious and heedless, as children can often be, but when Aemond makes a particularly nasty reference to Harwin, Jayce pulls a knife, but it’s Luke who ends up wielding it. One angry slash later, and Helaena’s prediction from last week comes to fruition: Aemond loses his eye.

Havoc breaks loose as parents, children, and everyone in between, loudly argue in the Driftmark hall. Things turn even more serious when Rhaenyra’s sons inform her that Aemond called them bastards (young Leo Ashton, who plays Aemond, has excelled in this role, to the point that the smirk that appears on his face at this moment caused my slap hand to twitch). Aemond, in turn, throws older brother Aegon under the bus, and at his claim that, “everybody knows,” Viserys uses his exasperation at his family’s behavior to gloss over it, knowing what it would mean for Rhaenyra.

It’s now that we see where Aegon and Aemond get their sense of entitlement from, because it’s at this point where Alicent literally demands an eye for an eye. If there was any doubt as to the depths of her twisted desperation to have her way, demanding the eye of a child should put it to rest. Even Criston, vile as he is, is unwilling to follow her orders to attack a small boy. There isn’t a single soul in the room who is willing to take up for her, and the realization devastates her (never mind how abhorrent her current cause is). Alicent has now reached her breaking point. She snatches Viserys’ knife and lunges towards Luke. Rhaenyra naturally steps in front of her son, grabbing hold of Alicent’s arm, who finally unleashes what she’s held inside for all of these years:

“What have I done but what was expected of me? Forever upholding the kingdom, the family, the law. While you flout all to do as you please. Where is duty? Where is sacrifice? It’s trampled under your pretty foot again! And now you take my son’s eye, and to even that you feel entitled.”

Rather than express any fear, Rhaenyra takes a dark satisfaction in Alicent’s breakdown before making her keenly aware of the many people surrounding them, informing her, “now they see you as you are.” Alicent still manages to draw blood, but there’s no triumph to it. She does find a measure of success later, when she finally obtains her long-sought approval from Otto, along with very valid point that though her son may be short an eye, they’ve now obtained the largest and most terrifying dragon in the kingdom.

The sun has risen by the time Laenor—whose constant absence does nothing to aid the denial of those rumors—arrives to assess the situation. “I should’ve been there,” he tells Rhaenyra apologetically. “Those should be our house words,” she snaps back. Actor John Macmillan deserves some real accolades for his ability to make Laenor such a self-pitying sack without becoming an object of disgust. Rhaenyra tries to comfort him despite his many failings (I love Emma D’Arcy in this scene as well). Laenor pledges himself to Rhaenyra, proclaiming that he’s determined to become the husband that she deserves, to do his part to solidify her position to step into the role of queen.

Best intentions mean little in this world, however. Touched as Rhaenyra may be by Laenor’s declaration, Daemon’s a widower now; between the lifelong torch she’s carried for him and her precarious political situation, he would make an ideal husband to solidify their Targaryen legacy, especially in the wake of Aegon and Helaena’s betrothal. “Let us bind our blood,” she proposes. Unfortunately, bigamy is one of the few genuine taboos that can’t be overlooked, and Laenor appears to be in spectacular health. A plan is formed, but one with an unexpected twist. After Daemon approaches Qarl Correy (Arty Froushan), Laenor’s lover, with an offer of money and freedom, Qarl instigates a sword fight with Laenor (after a VERY brief scene showing Daemon breaking a servant’s neck). When Corlys and Rhaenys run into the room, they see the body of their remaining child burning in the fireplace of their great hall. It seems a matter of cold-blooded murder, but as we watch Rheanyra and Daemon’s private wedding ceremony, a quick look at Qarl on a boat with a hooded figure reveals that the mysterious passenger is none other than a freshly-shorn Laenor, presumably going off to live the life he’s always wished (with Rhaenyra and Daemon’s blessing, no less).

Rheanyra believes the court’s horror at the “murder” may prove beneficial. Risking the allyship of the Velaryons is a massive gamble, especially since there’s no blood relation to leverage. Their continued allyship now hinges solely on how badly Corlys wishes for someone of his “line” to sit on the throne. Without the Velaryons, the value of having Daemon by her side will be greatly mitigated, and Rhaenyra needs as many allies as possible.

I thought that Alicent, with her high-and-mighty ways, was a threat before. I spoke too soon. Because Alicent, absent of the yoke of virtue and respectability, is a far more dangerous foe. With an enormous dragon, a trained warrior as protector, and a remorseless killer by her side, the odds are increasingly stacked in her favor. In the growing battle between the Greens and the Blacks (a Targaryen house color), the gathering of allies and resources are all that matters for the moment. Unless Rhaenyra uses hers to her best advantage, their side of the Targaryen tree may very well go up in flames.

Kaleena Rivera is the TV Editor for Pajiba. When she isn’t sad over the loss of Macmillan’s wonderful presence (perhaps another Chewing Gum viewing is in order), she can be found on Twitter here.


← No Mercy in 'God's Country,' a Shocking Story of Devastating, Runaway White Privilege | Maybe Beverly from 'The Goldbergs' Is Just a Terrible Mother →