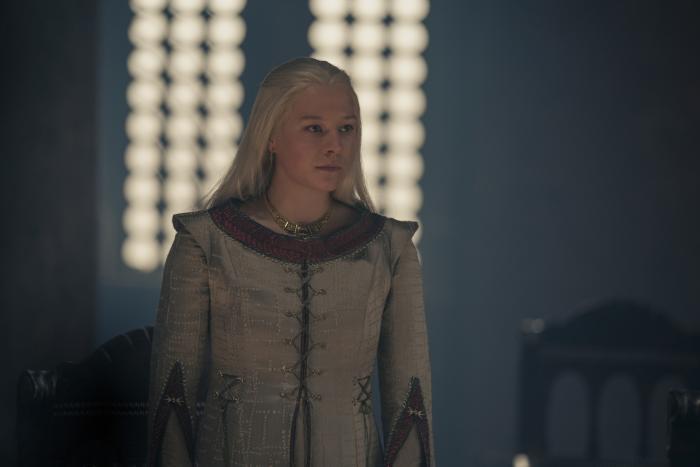 ‘House of the Dragon’ Really Needs to Slow It Down

It finally happened: the largest time jump yet has flung all of our major players into the future. After a decade and many children and alliances later, viewers are understandably left scrambling to get situated with the current circumstances. It’s a bold plot maneuver that pays off in numerous ways, though there is undeniably a measure of collateral damage story-wise.

The opening places us straight in the midst of one of biology’s greatest dramas, the birthing process. Rhaenyra (now played by Emma D’Arcy) was always made of sterner stuff, but walking from one bed chamber to another after having freshly given birth, complete with bloody footprints divulging the aftermath, is a whole new level of tough. There’s only a few minutes to process the sheer pettiness that Alicent (Olivia Cooke) must possess to insist on having the newborn brought to her—until the ‘why’ is answered, of course, though her actions are no less petty—as well as reconcile the fact that Laenor (John MacMillian) has grown up to be a bit of a himbo (“Was it terribly painful? I took a lance through the shoulder once!”), before a shocking revelation is revealed to the audience: Laenor isn’t the father.

In fact, none of their three children possess any of the obvious physical markers identifying them as the blood of Old Valyria, including the signature white hair sported by both Rhaenyra and Laenor. Things only begin to add up when we find Ser Harwin Strong (Ryan Corr), now Lord Commander of the City Watch, awaiting Rhaenyra’s arrival along with her sons, Jacaerys or “Jace” (Leo Hart) and Lucerys or “Luke” (Harvey Sadler), all three of whom possess the same rich brown hair. Just to put any doubt as to the true parentage of these children to rest, Harwin freely throws proud, lusty looks in Rhaenyra’s direction while he cradles the baby once Laenor allows them respectful privacy.

Rhaenyra has always had a reckless streak, but I found this to be an astounding turn of events. It’s one thing to agree upon an open marriage, but it’s quite another to not produce any fully legitimate heirs over the course of said marriage. Whether it’s a matter of feeling overly secure in her position as heir to the throne, an all-consuming adoration of Harwin, or a combination of both (the inability to point to one or the other is part of that collateral damage I spoke of earlier), it’s a display of carelessness that’s shocking to behold. This is especially true when taking into account the acrimony between her and Alicent, all of whose children sport the signature Targaryen hair. Confident Rheanyra may be, but a wiser soul would have found a way to couple with her husband enough to produce the necessary children to continue their line, especially since the king’s firstborn son has both the genetics and gender the kingdom finds fit to rule. In a side-by-side competition between Jace and the white-haired Aegon (Ty Tennant, the son of David Tennant), now a tall, insolent teenager, it wouldn’t take much for loyalties to be swayed.

At least we get the pleasure of seeing Viserys get to be an adoring grandfather. Judging by his looks, Viserys is nearing the end of his life, but until death finally grants him true peace, one of his few joys is watching his progeny gathered together. He’s unwilling to acknowledge the truth about his grandchildren’s parentage for the sake of keeping the peace, as well as to protect Rhaenyra and the boys. Though the man’s a pushover, especially when it comes to Alicent, who almost certainly didn’t obtain a seat on the Small Council on merit alone, when it comes to his beloved eldest child, even Alicent’s words fall on deaf ears:

“To have one child like that is a mistake, to have three is an insult, to the throne, to you, to House Velaryon and the match you battled so hard to make for her.”

But with Viserys’ refusal to acknowledge what’s in front of him, to the point of forbidding her to speak on it any further, Alicent’s power struggle comes to a bit of a stalemate. One of the only people she can confide in is Ser Criston Cole, who’s still a knight of the Kingsguard and no less bitter after Rhaenyra’s perceived slight against his honor despite the years that have passed. But unlike Alicent, Criston has a longer leash when it comes to stirring up trouble; when all of the boys are training one afternoon, Criston takes the opportunity to goad Harwin by pitting Aegon and the much smaller Jace against one another, only to then make the (not very sly) insinuation that Harwin is the boys’ father. That’s all it takes for Harwin to attack Criston, and he’s unfortunately pulled away before he could do even half the damage Criston rendered on the unsuspecting Ser Joffrey.

After learning of this debacle, Rhaenyra eavesdrops on Harwin and his father Lyonel. It’s only then that Rhaenyra learns how widespread the rumor has become, a deeply foolish blunder on her part. It seems little has changed since she was that young haughty princess who cared little for the opinions of the common folk that fateful night she went out with Daemon. Unless she learns to care about the way she’s perceived, it’s going to almost certainly prove to be a fatal flaw. At the next Small Council meeting, Rhaenyra makes a desperate effort at diplomacy by proposing a betrothal between future king Jace and Alicent’s daughter, Helaena (Evie Allen), along with allowing her youngest boy Aemond (Leo Ashton) a dragon egg from the next clutch. It’s too little, too late, though even if the incident at the yard hadn’t taken place, Alicent’s hatred of her is fortified by too many years of resentment and fear.

Unfortunately, that yard incident sets off a horrific and entirely unforeseeable sequence of events. Because there were so many witnesses to Harwin’s outburst, which all but confirmed the rumors are true, Lyonel feels the only action is to send him back to Harrenhal in the hopes that the white-hot rumor will eventually cool to embers. Lyonel himself attempts to quit his position as the King’s Hand, fully aware of his inability to maintain objectivity, but Viserys refuses his resignation. Alicent practically salivates over the possibility of someone beside her telling the king the truth to his face, but is once again denied the satisfaction. Besides Criston, her primary advisor is Ser Larys Strong, the weasel who informed her of Rhaenyra’s dishonesty. Once she informs him of Lyonel’s plan, Larys takes it upon himself to acquire a handful of prisoners scheduled to be executed, cut off their tongues (the most efficient way to fashion perfect accomplices), and set them off to burn Harrenhal while Lyonel and Harwin are still in it.

While it’s true that Alicent is horrified over this turn of events, it’s easy to argue that she’s less concerned with the loss of life than she is over her association with the perpetrator. Because much like Criston with his honor and status, Alicent has equated her cause with the very definition of morals and decency. But like most people who spend their time fretting over others’ lack of morality, she weaponizes it with an uneven hand; Aegon is a menace in the making, but she’s uninterested in righting his course. To add even more layers to Alicent’s perspective, she operates under the belief that she hasn’t received what she’s owed. Her role as queen has only brought her loneliness and strife. Seeing Rhaenyra get everything she wants, including what seems to be preferential treatment by everyone with a position in court (Larys: “You cannot say, my Queen, that your father would be impartial in this matter.” Alicent: “No, but he would be partial to me!”), while not abiding by (one can even say ‘flouting’) the same rules Alicent and other royals are beholden to could drive even the most morally stringent person to bend the parameters of what they find acceptable. Larys knows this quite well, which is why he’s confident that once Alicent gets a taste of what it means to get her own way, she’ll warm back up to him once more. In the interim, he’ll occupy his days installing himself as the new Lord of Harrenhal.

Beyond all the drama at King’s Landing, Daemon is well-situated in Pentos. Like Rhaenyra, he’s also spent the last decade creating a family. The seductive vibes between Daemon and Laena Targaryen (now played by Nanna Blondell) at Rhaenyra and Laenor’s wedding celebration came to fruition, as the two are now married and have two daughters, Rhaena (Eva Ossei-Gerning) and Baela (Shani Smethurst). But their relatively peaceful existence is disrupted by Laena’s desire to return home, butting up against Daemon’s desire to stay. Things take a tragic turn when the pregnant Laena goes into labor only for the birthing process to go horribly wrong. Rather than suffer an agonizing death (it’s impossible not to think of Aemma’s wretched end), Laena makes her way to Vhagar, the dragon she was so proud to have tamed, and gives the order to burn within the dragon’s flames while a doleful Daemon looks on.

I have felt largely positive about House of the Dragon over the course of the season, and although I understand some of the critiques, particularly those revolving around the controversial time jumps, they’ve done little to dampen my enjoyment. However, establishing the timeline in such a way that we receive minimal time with adult Laena is the biggest misstep the show’s made thus far. Even one more episode with Blondell would have helped to have her presence feel less truncated, and her loss coupled with the death of Harwin feels less like bookended tales of tragic love lost than the audience being robbed of these two alluring actors’ presence.

Hopefully, now that the various players are taking their respective places—Rhaenyra and her camp in Dragonstone, with Alicent taking charge of the Red Keep—things will slow down just enough for us to become reacquainted with these older, ever more complicated, versions of the characters we’ve come to know quite well. Things will be especially tense once Rhaenyra receives word that her long-time lover has perished in an all-too timely fire. Recognizing the potential threat awaiting them, Laenor gives Rhaenyra a little maritime bon mot: “The wise sailor flees the storm as it gathers.” We’ve now seen how these players comport themselves as they flee. What will happen when they become the storm?

Kaleena Rivera is the TV Editor for Pajiba. When she isn’t collecting House of the Dragon memes, she can be found on Twitter here.


← The Try Guys Drama and Analysis by an Actual Try Guys Fan | Are We Sure This Was The 'La Brea' Season 2 Premiere? →