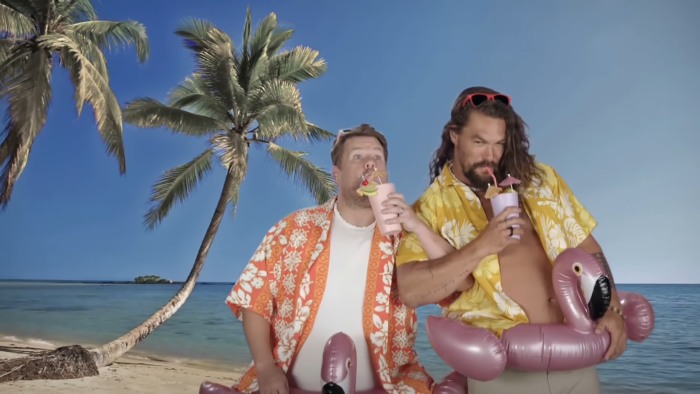 Here Is Jason Momoa Slapping James Corden With A Tortilla

You know why you’re here. I know why I’m here. It’s not that I want to see someone hurt. Of course, I don’t. I feel kinda bad for James Corden here. I knew that all I had to do for the headline was mention him getting slapped and people would probably click on it. Even Corden must be aware that people want to see him take cooked flour to the face.

On the latest episode of The Late Late Show with James Corden, he has a fun summer montage with Jason Momoa. They dress alike, they act alike, and they drive their car off a cliff, all in good fun. It’s a funny little bit, but the part getting the most attention is an outtake. Here’s the full video first.

Pretty funny! My favorite part is that, at arguably the funniest part of the video, when Corden and Momoa’s car goes off a cliff and bursts into flames, the audience doesn’t laugh. There’s an awed hush that would almost make you think they don’t understand that Jason and James didn’t actually die. It’s great to see a bit made even funnier because it’s seemingly taken seriously at its least serious moment.

James throws to commercials after that and shows an outtake of Momoa hitting him too hard with a tortilla. He knows what people want. In fact, I’ve got a clean, uncut version for you below if you want to watch it again. You know you do.

A post shared by The Late Late Show (@latelateshow)