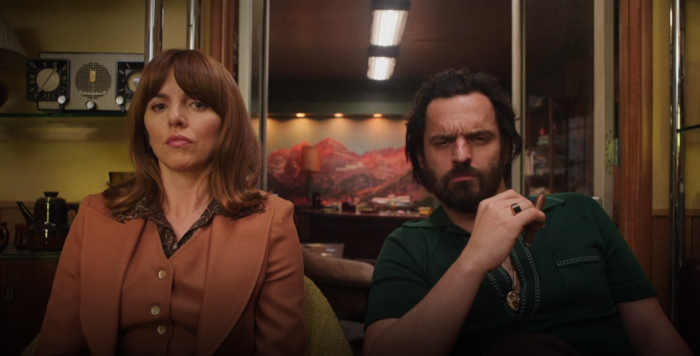 HBO’s ‘Minx’: A Surprising Amount of Heart For This Sexy Series

What stuck out to me most while watching Minx wasn’t the adherence to the looks and sounds of its 1970s setting, the casual misogyny on display by the majority of the male characters, or even the many, many penises on display (more on that later); it was the speed with which the show delivered its premise. Literally within the first two minutes, our protagonist, the staunchly feminist but prim Joyce (Ophelia Lovibond) meets the uncouth but sincere businessman, Doug (Jake Johnson), who will become her business partner, as she waits to enter a magazine publisher convention. It’s the sort of life-altering meetup scene that in most other series would typically occur in the last ten minutes of the pilot, so when Minx wasted no time getting into the meat of the story, I was immediately curious wondering what sort of ground creator and writer Ellen Rapoport is so eager to cover over the course of the season.

The women’s liberation movement in the ’60s was a time of revolution in this country, specifically in the realm of sex and reproduction. But as we all know, progress is slow going—as the current political climate makes abundantly clear—so even though go-getter Joyce with her progressive ideals and Vassar degree may have the motivation and ideas to launch the first feminist magazine (with the lofty title The Matriarchy Awakens), she has no backing from any of the men who rule over the publishing industry. Her only saving grace is Doug, the owner of Bottom Dollar Publications, which specializes in what Joyce finds to be the antithesis of her vision and personal values: pornography. Although Doug has little interest in feminist theory and even less interest in academic rhetoric, he is interested in money, and in meeting Joyce, he realizes there’s an entire neglected demographic when it comes to erotic offerings. Thus from the loins of desperation and innovation, an unlikely partnership is born.

Of course, there’s more than a little trepidation and internal struggle when it comes to fusing pornography, with all of the many discussions revolving around potential exploitation and adverse human behavior (that are still deliberated today, which some sections of the adult industry have made concerted efforts to address) with women’s advocacy. Thankfully, Minx doesn’t waste time trying to fool anyone into thinking that the ability to gawp at penises will somehow advance the cause of feminism. Instead, it treats pornography aimed at women as titillating their curiosity and arousal, centering the series around Joyce as she stumbles as a newbie in the sex industry, switching back and forth between cheerful enthusiasm and anxious daydreams of Gloria Steinem lobbing tomatoes at her. Lovibond is well-suited in the role, sparing Joyce from being entirely insufferable in her pedanticism (“It’s pronounced PROUST”). She’s a classic know-it-all, but her eager idealism makes you want to see her succeed, if not through the pretentious avenues that she insists upon. However, that idealism isn’t far removed from a naivete that dips into ignorance, which is why, as a white woman who comes from money, she can stick her foot in her mouth on occasion. Thankfully, she receives the necessary pushback from the likes of her sister, Shelly (Lennon Parham), and Tina (Idara Victor), Doug’s longtime secretary who hopefully gets some time in the spotlight over the course of the series’ run, because she is a delight.

Therein lies what may be the biggest drawback in the show thus far: the side characters are more interesting than our leads. Johnson is arguably the show’s biggest draw, though I admit it’s hard not to see Nick, his longtime role on New Girl that launched him into fame, in Doug’s wry wit and sarcasm, a mode he spends the majority of his screen time in. Joyce, meanwhile, may be the spoke that the wheel of the show turns on, but there’s little mystery to her; you’ll instantly know her or, at the very least, have seen a version of this person on numerous occasions. Whereas someone like Bambi (Jessica Lowe, fresh off of her hilarious turn on The Righteous Gemstones), as the sweet yet ambitious adult film star—and possibly the true creator of the Heimlich Maneuver, as demonstrated in one scene, a good two years before Dr. Henry Heimlich first published the choking maneuver in medical journals in 1974— inspires far more curiosity. That isn’t to say that seeing Joyce work her way through both her sexual and self-discovery isn’t a worthwhile venture (even if she can invoke eye rolls at times), but that well-trod road is less satisfying than the story-telling potential that Bambi, or gay makeup artist/photographer, Richie (Oscar Montoya), could very well provide, were the show willing to decenter Joyce. It’s possible this could still be explored later on in the series, once Minx gets rolling (both show and eponymous publication).

Despite its relatively few flaws, Minx is a bubbly treatment of sex, gender, and ambition during a watershed moment in American history. Its greatest source of charm comes from upending expectations, such as a wholesome gag involving the adult performers at Bottom Dollar and Shelly’s teenage son, or Bambi’s desire to inject a meaningful backstory into a sapphic teacher/student photoshoot. For all of its prurient ways—which, considering the frequent allusions to pornography, is still more tame than, say, the average episode of Euphoria—the series relies far more on the heart than … other organs.

The first four episodes of Minx are available to stream on HBO Max.

Kaleena Rivera is the TV Editor for Pajiba. When she isn’t researching how old the Hitachi Wand is (available on the U.S. market since 1968!), she can be found on Twitter here.