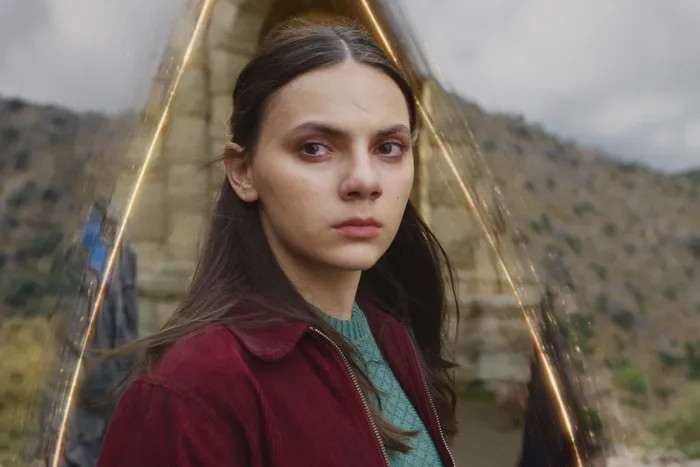 His Dark Materials, the monumental HBO Max series that sought to bring Philip Pullman’s modern classic to the screen, wrapped its third and final season just at the close of 2022. With its adaptation of the third book in the trilogy, that’s all there is. (Or it would be, if Pullman weren’t still insisting on writing Lyra into stories that are at best an awkward fit, but that’s another review that I don’t think I have the fortitude to get through during Dry January.) That is to say, the possibility of a follow-up series isn’t out of the question. But I for one would be satisfied with what we have: an epic and challenging adaptation carried off with heart and panache.

The show’s final season returns us to just about where we left off, neatly at the seam between the second and third books, with Lyra (Dafne Keen) and her daemon Pantalaimon (Kit Connor) in the clutches of her complex villain of a mother, Mrs. Coulter (Ruth Wilson), and Will (Amir Wilson) hot on the trail on hundreds of miles and the boundaries of many worlds. Also in pursuit are the forces of the Magisterium, personified by the imperial and brutal figure of Father MacPhail (Will Keen). Lord Asriel (James McAvoy) is setting the grand vision for his revolt against the Authority. The cast is a massive sprawl, from Simone Kirby as the Dark Matter scientist/mystic Mary Malone, Lin-Manuel Miranda reprising as the lovable Lee Scoresby, Adewale Akinnuoye-Agbaje as Ogunwe, Chip Chung as the angel Xaphania, among many, many others who fill out the long cast of characters.

The series hurtles towards its epic conclusion of cosmic free will versus subservience, catapulting through worlds of wonder and impossibility. The series isn’t one hundred percent true to the novels, but it plays within the boundaries of the books—staying in the same imaginative realm and sticking to the rules. Some things shift: instead of a high cave in the Himalayas, for instance, Mrs. Coulter hides Lyra away in a chapel in a rocky cove, and instead of a young pilgrim visiting someone she thinks is a holy woman, there’s a deaf child who rows out to bring Mrs. Coulter food and flowers. In episode one we have some extra Lord Asriel adventures to establish him as an action hero as well as a leader and figurehead and get a dramatic introduction for Ogunwe, plus Ogunwe getting more of a context and backstory (as well as making him a nice fatherly foil to Asriel’s tremendously bad parenting). The sadistic Father Gomez (Jamie Ward) gets more characterization and screentime as well. None of it really steps out of line with the books, even as it embellishes and pads where it likes. But it makes sense for readers like me for whom the books, there is a sense of solid consistency and canon behind all its more flexible moments.

The cinematography, design, and overall visual execution, as ever on this show, are tremendous. This is especially impressive when you consider what is being summoned to the screen: angels only visible by their barest outlines, doorways sliced between parallel universes, the physical manifestation of consciousness itself—not exactly straightforward. But the show manages to keep a sense of clarity and physicality that doesn’t disappoint. (I’ll qualify that by admitting that not all the visual effects, especially the digital ones, aren’t a roaring success. But still, you can feel the imaginative energy in the world(s) of the story, and to its credit, the show doesn’t shy away from its more difficult renderings.)

The script, frankly, isn’t as impressive, though it stays true to the style of dialogue in the novel: It’s very plain and direct, and while it does the job, it doesn’t work quite as well on screen as it did on the page. As the series moves along, the style of the lines becomes more immersive, helped along by compelling delivery. It’s a gradual process that picks up after the second episode during a binge. But that’s a relatively minor complaint all things considered. The script does lend itself to meaningful silences in which a stellar cast gets to do some nonverbal acting.

Speaking of the impressive cast: The first episode is appropriately dedicated to the memory of the incandescent Helen McCrory, who voiced Stellamaria, Asriel’s daemon, for the first two seasons before her death. (Damn that loss still hurts though.)

The show remains a facsimile of something that was great in its own right, a revisiting rather than a reinvention. Scenes fall slack where in the books they were electrifying. And maybe that’s not a fair way to judge an adaptation—but even taken on its own terms, there are strange, stagnant pitfalls that keep the show from really gaining its momentum. Instead, to me at least, it feels like it’s going through the paces of the story, embodying it where it potentially had the space to do more. For me His Dark Materials had more drive in its first season when it was exploring its own boundaries, but there is so much ground to cover in the third book it’s hard not to feel like the final season wasn’t more like a paler reflection of its source material rather than a fresh outing. Still, I would call it a success, emotionally effective, and true to the complex themes and bitter truths of the book series. (Besides, there’s a fine line before an inventive adaptation crosses the line into the territory of too much reinvention. I’m torn.) Keen and Wilson, first as child adventurers and then as universe-shaking figures out of legend, deliver compelling and dynamic performances that give the story its sincerity and heart.

Whatever its shortcomings, His Dark Materials takes an epic attempt at an epic story and delivers in surprising ways, and it engages deeply with the life of its story. It’s well worth the journey.

All three seasons of His Dark Materials are streaming on HBO Max.