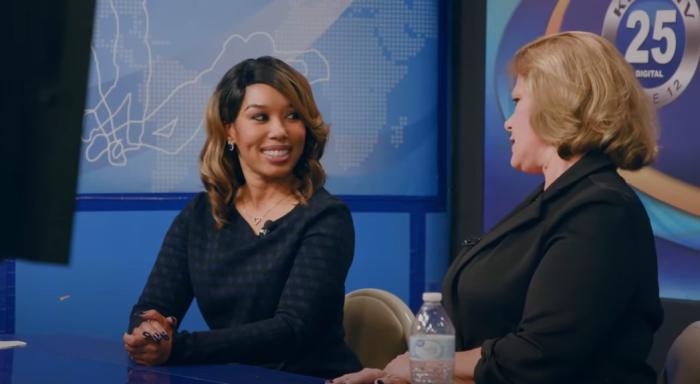 The news industry is dying. We’ve been hearing that for years now. And it’s mostly true. While prestige legacy news publications like The New York Times and The Wall Street Journal have seen growth in their audiences, other less well-funded outlets across America have been forced to downsize or shutter their operations outright. According to analysis from Pew Research Center, employment in U.S. newsrooms has declined by 26% since 2008. In 2020, McClatchy — a major news chain that owns dozens of newspapers across America — filed for bankruptcy. Responding to the news, CEO Craig Forman put it plainly: “When local media suffers in the face of industry challenges, communities suffer: polarization grows, civic connections fray and borrowing costs rise for local governments.” Basically, if journalism is in crisis, then so is our democracy.

A new documentary series from HBO, Small Town News: KPVM Pahrump, puts that crisis in the spotlight. Over six half-hour-long episodes, executive produced by Fenton Bailey and Randy Barbato—the Emmy-winning team behind HBO’s Catch and Kill: The Podcast Tapes—we follow the efforts of an independently owned news station in the small rural desert town of Pahrump, Nevada, as it tries to not only sustain its operations but also to expand into the nearby Vegas market over the course of 2020.

In our current era of rampant media consolidation, independent news stations like KPVM are becoming a rarity. It was built by Vernon Van Winkle, a Trump-loving businessman, and has remained under his stewardship for nearly twenty-five years. Vern runs the station with his singer/songwriter wife Ronda, who once dreamed of making it in Vegas, but has settled for helping Vern realize his lifelong dream of a Vegas expansion. “Everything I did was HKU,” Vern says in an early talking head. “Hard Knocks University.” This folksy parlance is the first indicator of the kind of quirky cast of characters (not a one would be out of place in a Christopher Guest movie) KPVM is blessed with.

Deanna is the station’s acerbic news director and anchor. Her younger co-anchor Eunette—one of the few people of color in the documentary and the town—has a placid façade that makes her impossible to read. “I’m genuinely happy,” she explains, “but, just as a side note, I have resting smile face.” She commutes over 60 miles from her home in Vegas to help with weekday coverage like court reports, which she’s proud of even if they aren’t appreciated in the way she wishes. (“They don’t want big words anymore,” she sighs to Deanna. “I took out ‘court concurs’ and put ‘agreed’.”) John is a charismatic but inexperienced transplant from Alaska who got tapped to be the weatherman after the last one quit. He’s more interested in having fun on-screen than reporting the weather. But, to be fair, in a desert town like Pahrump there’s not much weather to report (“A typical workday for me is typically very short”). Deanna also explains that due to staffing issues like under-qualified hires and high turnover (some employees are introduced and depart in the same episode) she wears several other hats at KPVM; reporter, camera operator, and, she says, “I try to keep Vern from talking about Trump.”

One of the biggest problems facing the broadcast television industry is a reliance on ratings and ad money that often drives the news agenda to focus on shallow topics and/or cover deep topics shallowly. “If it bleeds, it leads,” is still the industry standard. At one point Deanna approaches the town sheriff practically begging her to make something newsworthy happen: “Do you want to arrest a bunch of people so I have something?” The desperation for something to happen is keenly felt. B-roll of the desert terrain shows that not even the wind seems to be up to anything. KPVM’s broadcast highlights include a donkey basketball game, the Mr. Hunk from Pahrump competition, stories on local missing pets, and ads from local residents like an injury lawyer and a musician who believes in aliens.

The University of North Carolina’s School of Journalism and Media has been studying the emergence of what’s known as “news deserts“—regions that have either significantly diminished or lost news coverage—for years now. According to Poynter, “the people who live in news desert communities tend to be poorer, older and less educated than the average American — often its most vulnerable citizens.” Pahrump is one such news desert. But perhaps more interesting than Small Town News: KPVM Pahrump acting as some parable about the consequences of news deserts, is the fact that Pahrump is Trump country.

The series’ format relies on month-to-month documentation of 2020, which means we get a first-hand look at the hurdle of producing crucial election year coverage in Nevada’s conservative Nye County. At KPVM, an openly divided newsroom attempts to wrestle with two of the biggest problems facing the journalism industry: bias and under-funding. Vern regularly wears Trump merch and is aware people will accuse him of bias but explains his approach to the issue with a pancake metaphor: “You can never get an equal cooking of a pancake on both sides.” Due to the aforementioned turnover, new hires like reporter/co-anchor Missey, who is also John’s wife, work double-time as their own editors. While editing the station’s coverage of the presidential debates, Missey admits to struggling to figure out how to cut clips in a way that feels journalistically responsible. “I’m not a person who can handle confrontation, so this isn’t good for me,” she explains.

The KPVM team is rocked by a lot of curveballs over the course of 2020 including the COVID-19 pandemic, employees dealing with the sudden death of family members, co-workers being lured to new jobs that actually pay well, and dwindling funds as the station struggles to recruit advertisers. Through it all, and despite espousing different political beliefs during a contentious election year — the news team maintains an unlikely camaraderie that lends the series a Parks and Rec-like warmth. It’d be easy to write off Vern — and understandable if you still do — for fangirling over Trump, but the documentary isn’t concerned with ridiculing his red hat. It’s interested in his humanity, which includes his prickly politics but also the way he instinctively comforts a tearful and overworked Deanna, or rallies after experiencing back-to-back setbacks to his American dream.

Small Town News: KPVM Pahrump is a story of perseverance. The docuseries’ material may seem thin but the cast of characters at KPVM treat each day like the stakes are life and death for the station (“Each day costs money,” Vern says). Their investment makes us invest too. This series, set in a town that not many people live in and perhaps fewer people have heard of, is able to humanize subjects whom it would be easier to deride while also telling a side story about the perilous state local reporting is in — a crisis that many Americans aren’t aware of — to boot. Small Town News: KPVM Pahrump is proof that ‘small’ isn’t synonymous with ‘unimportant.’


← How to Trash Your Old Director without 'Trashing' Your Old Director: David Ayer Edition | 5 Shows After Dark: 'Cocaine Cowboys: The Kings of Miami' Premiere Netflix, 'Olympic Summer Games' on NBC →