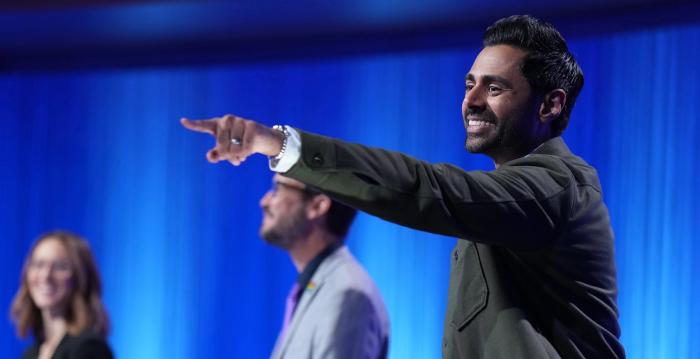 Last week, Hasan Minhaj appeared on Celebrity Jeopardy and incurred the wrath of Jeopardy fans by mugging for the camera, showing off, and genuinely being as obnoxious as possible throughout the episode, which he lost to Wil Wheaton. It was excruciating. Jeoopardy fans sounded off on social media afterward, calling Minjah the worst guest ever on the game show.

Minhaj didn’t care. The host of Netflix’s Patriot Act appeared on Jimmy Fallon to discuss his Jeopardy stint and “apologize,” which largely amounted to a bro-y bit about how funny it is that Minhaj is annoying to “dedicated nerds.”


“I’m sorry I desecrated an American institution,” he said. “I’m sorry I ripped your 7 p.m. linear TV pacifier out of your geriatric mouth. And most importantly, I’m sorry for trying to make Jeopardy! fun.”

If Hasan Minhaj wants to make fun of Jeopardy viewers, have at it. Those “dedicated nerds” are an easy target. Haha! Isn’t it cool to mock people passionate about the one game show in America that actually tests a person’s knowledge instead of asking them to jump in a vat of bouncy balls? Stick it to ‘em, Hasan! How dare they get upset when one guy thinks he’s above 58 years of gameplay because he thinks what he’s doing is “fun” for anyone other than himself. Yes, definitely: The people who complained about the guy acting like an asshole on television are the real problem here.


← Amber Ruffin Has Fun With The Urgency Of The Midterms | 'Atlanta' Recap: Even Black People Need To Wear Sunscreen →