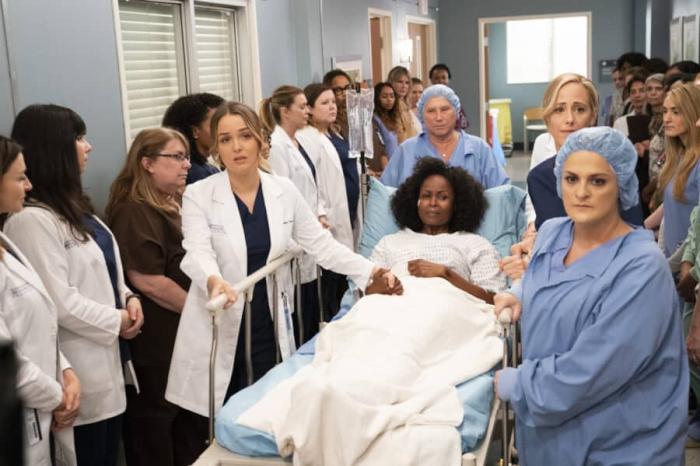 Elisabeth Finch (pictured, bottom right in the scrubs) is a longtime writer for Grey’s Anatomy. She has had a history of alleged medical issues, including cancer and an abortion while undergoing chemotherapy. She has detailed these traumas in personal essays for various publications, including Elle and Shondaland.com. At the age of 34, Finch said that she was diagnosed with bone cancer (but only after initially being misdiagnosed). Here’s an article she wrote for Elle, which inspired an arc on Grey’s:

The rub, however, is this: The HR department at Disney/Shondaland is currently investigating Finch because there are some questions about the truthfulness of those accounts. Those doubts were initially raised by Jennifer Beyer, Finch’s estranged wife with whom she is going through what appears to be an acrimonious divorce.
At some point, Finch said she had to leave the set to deal with a family emergency, and when colleagues called Beyer for an update, Beyer told them that the medical traumas Finch had experienced were actually her own. In other words, Beyer told Shondaland bosses that Finch was lying.

Finch has been placed on administrative leave pending an investigation.

“There was so much craziness in her life and she was so cryptic and private and it was always like, what is the story here? It often felt like a carrot-dangle but I just thought we were dealing with someone who was wildly insecure but not some sort of mastermind,’ one source told The Ankler. Other sources have told The Hollywood Reporter that they don’t know who or what to believe.

Finch, through her attorney, has stated that she will not address her private health matters. In another statement, Shondaland said, “Only Elisabeth can speak to her personal story.”


← Jessica Biel Murders Melanie Lynskey with an Axe in the Teaser for Hulu's 'Candy' | Review: Ti West's 'X' Marks The Spot, Sweet And Sticky And Red, Oh So Red →