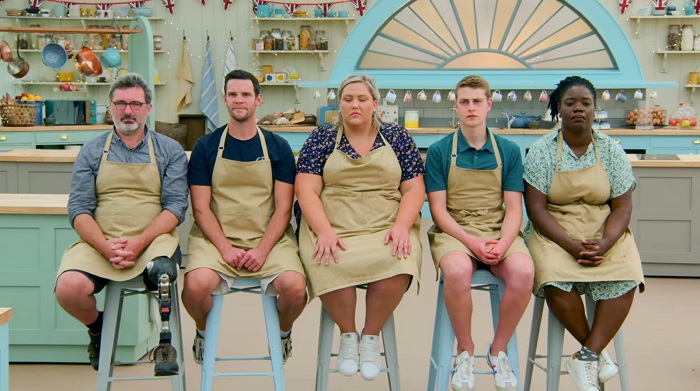 ‘Great British Bake Off’ Quarterfinals Update: A Bittersweet Farewell to My Favorite Contestant

SPOILERS FOLLOW FOR THIS CURRENT SERIES 11/SEASON 7 OF GREAT BRITISH BAKE OFF, AIRING WEEKLY IN THE U.K. AND ON NETFLIX IN THE U.S.

Great British Bake Off contestants are nearly universally lovely people. I suppose that if you wanted to be cynical, you could say that the show’s editing sure makes them look that way, but I’m hesitant to level that skepticism against this current group of contestants for series 11/season 8 on Netflix. Everyone seems really nice and supportive! They’re all quarantining together, and there seems to be a lot of familiarity and comfort with each other! At least they mostly know how to bake, unlike last season’s very young contestants, who were regularly befuddled by what seemed like pretty standard baking tasks! They didn’t even complain about those dumb pastry cages, while I would have lost my mind if that were me!

Pharmacist Sura, of Iranian descent, was my early favorite until she was felled by Chocolate Week; I’m still not sure how all the contestants this year so badly messed up brownies, but her mostly raw showstopper cake was her downfall. Then there was Lottie—or, as some here at Pajiba HQ think, Emma Stone in disguise—who I don’t think should have gone home during ’80s Week because I think her signature quiches made up for the failure of her cassette-shaped ice cream cake, but obviously Prue and Paul disagreed. I mourned for Sura and Lottie both! I think ’80s Week was a pretty weak theme! But that was not the end of my emotional response to GBBO this year. No, I actually teared up at the latest elimination, and I was very upset to say tatty byes to Marc Elliott.

I have a certain type of GBBO contestant whom I adore, and yeah, it’s pretty obvious: Person unsure of themselves find purpose through baking, expanding their horizons and growing into themselves. I know it’s an overly familiar story type, but hey, it’s effective! Nadiya Hussain’s season of GBBO might be my favorite series of TV, ever …

… And I understand that this is unpopular, but I also rooted really hard for Rahul Mandal. I felt seen in his simultaneous self-loathing and determination, in his refusal to quit anything even as he layered on the self-deprecation. That combination of unshakeable anxiety, covered up with ambitious stubbornness, speaks to me, perhaps a little too much! And sure, I root for Nadiya and Rahul too because they’re brown, and look, if I’m going to be predictable, I’m going be predictable all the way.

Still, I didn’t expect to fall so hard for Marc as I did. He seemed nice enough, if a little in-over-his-head at first. His bust of Ziggy Stardust was horrifying, as were they all. 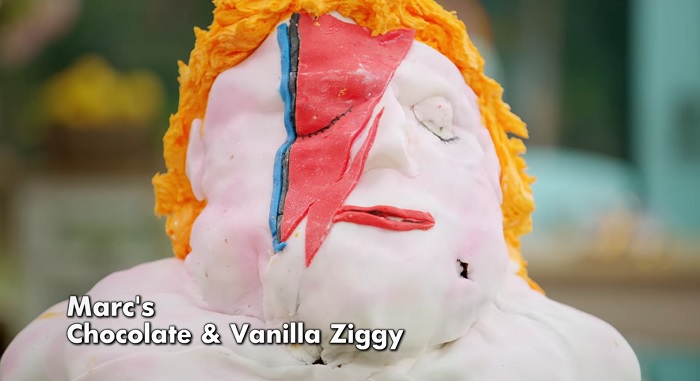 But then he really came into his own during Bread Week, winning Star Baker by tapping into his Cornish heritage for soda breads and making a beautiful and colorful Dharma wheel-shaped bread. 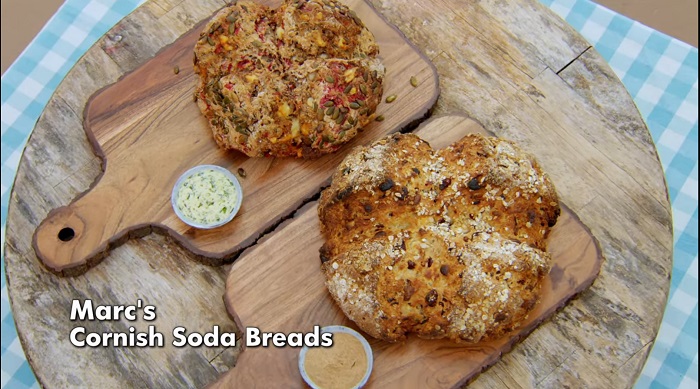 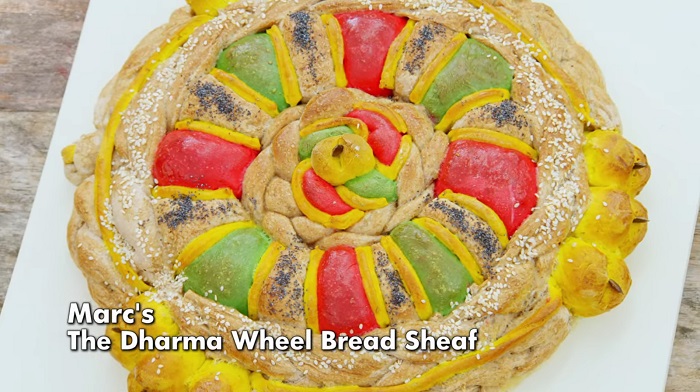 I am not really a pescatarian, but his Cornish fish pasties for Pastry Week seemed delicious, and he showed a deft hand with pastry again during Japanese Week with his ‘Hmmmm Dhal’ Steamed Buns. His Hamish the Dog Cake, although it seemed more to me like an owl than a puppy, was also lively and fun … 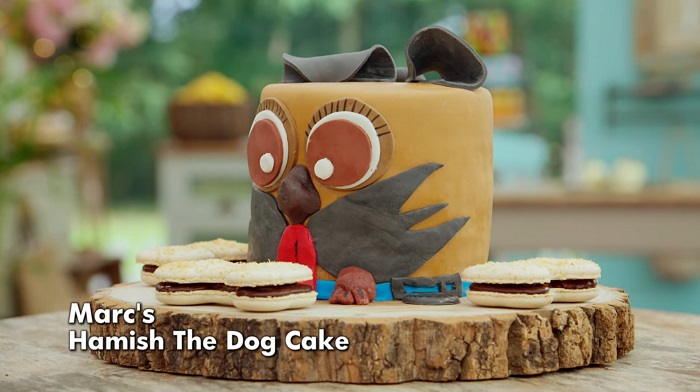 … And his cake for ’80s Week was the only one I liked; the striped pattern was very clever, and is this the only time I’ve wanted to eat a pear? Possibly!

As a baker, Marc was solid, even capable of flashes of greatness, and he stepped in to help other time-crunched contestants numerous times throughout the season. And as a person, Marc just seemed wonderful. I knew from the show that he was a single father to two daughters (whose excitement for his Star Baker win resonated with me deeply!), and that he was a bronze resin sculptor.

But did you know that he also used to be a pretty advanced rock climber, with the first ascent of a 7c (or American 5.12d) route in New Zealand? That’s very hard! And excuse me, Marc was hot!

My dude was very good!

After years of climbing, Marc transitioned into a more arts-focused life—he worked as a landscape photographer, then as a sculptor and support worker. Although he lost his left leg in a motorcycle accident in 2016, he’s back to bouldering and top-roping, often with his daughters …

… And began baking as a therapeutic exercise. As included in his GBBO contestant bio, “Marc decided to enter Bake Off in a bid to show his daughters that even when life throws obstacles at you, you can rise to new challenges and develop new passions,” and that kind of determination, to adapt to whatever circumstances the bizarre machinations of life throw at you? How do you not admire that?

Things didn’t go well for Marc during Dessert Week. His mini cheesecakes lacked apricot flavor. He did OK, but not amazing, during the incredibly gross Sussex pond pudding challenge (truly the most unappetizing thing I have ever seen on GBBO; I remember Mary Berry making this on a GBBO Masterclass episode, and it didn’t seem tasty then, either). And his jelly cake, while decorated with two layers of gorgeous injected flowers (anyone else feel like the show did a terrible job explaining what techniques the contestants use to actually create those jelly creations?), was a mess of various improperly set or baked textures. 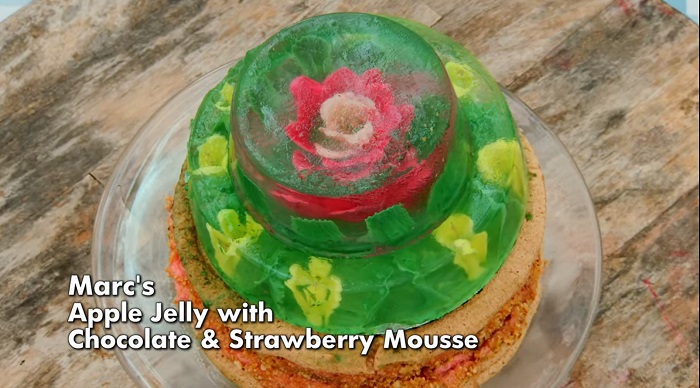 It was unfortunately clear that Marc had to go home, but he took the elimination with self-awareness and grace. His departing words were as thoughtful as I would have come to expect from a man who seems to live his life with intention, purpose, and compassion: “I came to Bake Off to face my anxiety, to face failure, to face all those things that people are quite uncomfortable about dealing with. I’ve definitely learnt a bit more about myself.” And I hope that he listens to his own advice and cuts himself some slack. 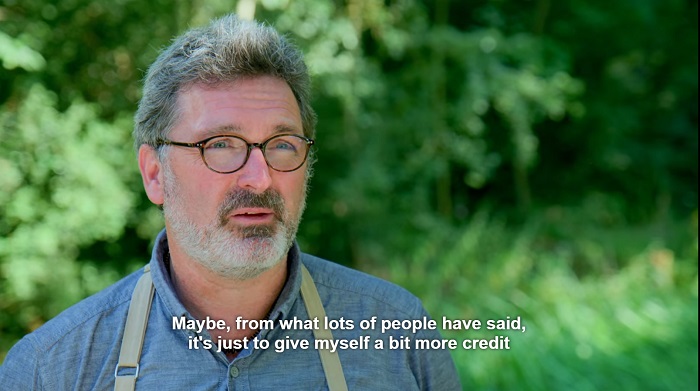 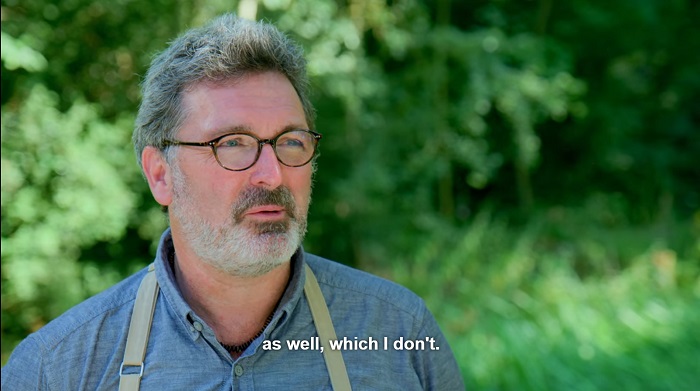 Sometimes it’s hard to see the effect we have on people. But when Laura teared up at Marc’s exit, and called him a “real gent”? I can’t think of higher praise, and of anyone of the current crop of GBBO contestants who deserves it more.

All my affection for you, buddy. You’ll be missed. 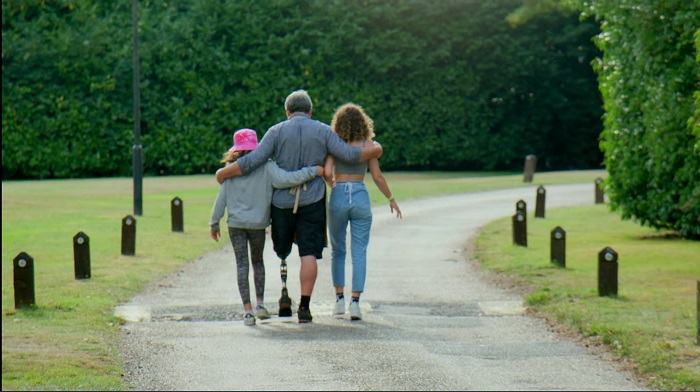