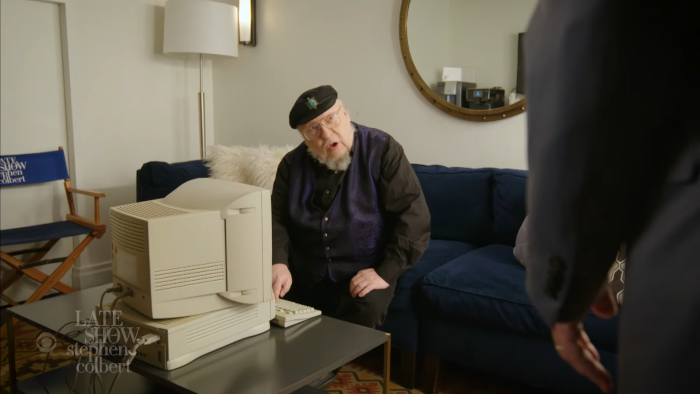 The first book, in George R. R. Martin’s planned seven-book saga The Song of Ice and Fire, was published in 1996. The fifth and most recent book was published in 2011. Since then, a television series based on the books ran for eight seasons. A prequel book, written by Martin, was released. A show based on that book finished its first season. The sixth and seventh books have not been finished, fans are antsy, and George decided to have a little fun with the whole situation.

Martin was a guest on the latest episode of The Late Show with Stephen Colbert. To kick things off, Colbert was upset to find that he was without a monologue. A producer told him that they’re still waiting on the draft from their new writer. The writer in question? George R. R. Martin, of course!

I appreciate Martin poking fun at his slow writing. But, that may be because I don’t have any particular connection to the books. I watched the original show and that’s where my Game of Thrones interest ends. If I was, say, someone who has been reading the books since 1996, I can understand being a little perturbed. With over 11 years since his last main book in the series, Martin is currently on his longest streak between volumes. Plus, the man is not getting any younger.

That said, at the end of the day, no artist owes anyone their art. If he finishes the next book, maybe even already has the last one ready to go, great. If he never finishes another book, them’s the breaks.