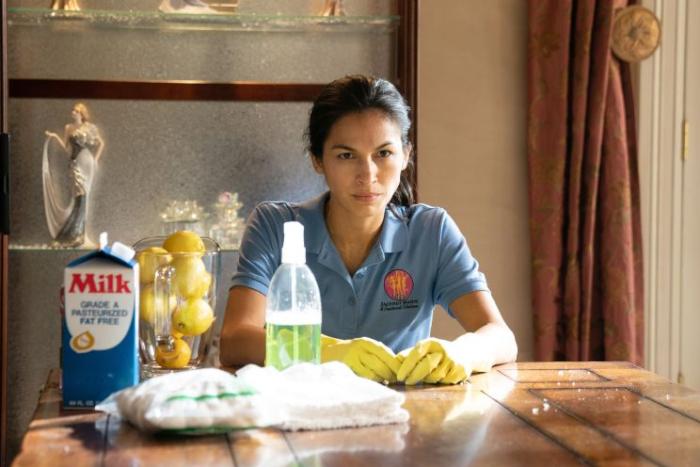 Cleaning people are having a moment. Two years ago, Stephanie Land’s Maid: Hard Work, Low Pay, and a Mother’s Will to Survive was a non-fiction bestseller that was adapted into the phenomenal series Maid, starring Margaret Qualley, which spent over three months on Netflix’s top ten list. This morning, Nita Prose’s The Maid: A Novel was released (I’ve already read a third of it, and it’s fantastic), and before it even hit bookshelves, it had been optioned by Hulu as a television series starring Jennifer Garner (she’s perfectly cast).

Meanwhile, The Cleaning Lady debuted on Fox last night, and like The Maid, its writers have clearly discovered that cleaning people are perfect protagonists for crime fiction: They can clean the hell out of a murder scene, and the nature of their profession suggests that they’re apparently invisible to most people. Smart.

In The Cleaning Lady, Élodie Yung (Elektra in Netflix’s Marvel Universe) plays Thony De La Rosa, a Las Vegan cleaning person living as an undocumented immigrant. Her son has a rare immunodeficiency disease that requires a transplant and necessitates that he live in a plastic bubble free of germs, which is also well suited to her profession. However, Thony only works as a cleaning person because — as an undocumented immigrant — she can’t work in the field in which she was trained: Medicine. She’s both a doctor and a cleaning lady, which makes her an ideal candidate for a position within the mob: Not only can she clean up murder scenes but she can also stitch up those who are injured during the course of those murders.

Here, after accidentally witnessing a murder, a mob boss, Arman (Adan Canto), decides to hire her because his mother was a cleaning lady, so he has a soft spot, and also because Arman would rather hire Thony than kill her. It works out for Thony, too, because Arman can provide the money and connections she needs to save her son’s life. That there is also some sexual chemistry between Thony and Arman? Well, that’s just gravy, isn’t it? Never mind that Arman is married (to a woman with whom Thony immediately connects); Thony’s married, too, although her husband is back in Cambodia.

The pilot episode is stuffed — there’s also a sister-in-law who is also a cleaning person, with whom Thony lives — and yet it’s all very bland, another intriguing premise sanded down by network television execs. There’s no tension, either — what comes after Thony witnesses a murder all feels too inevitable. Of course she’s going to join the mob; the episode doesn’t even provide many opportunities for inner turmoil. Moreover, even if I didn’t know from the previews for the rest of the season that an FBI Agent played by Kate Hudson’s brother was going to be introduced, I’d already know that an FBI agent was going to be introduced. Predicably, she’s going to play both sides, and I’m sure that the balance of her allegiances will shift toward the mob because Adan Canto is better looking than Kate Hudson’s brother.

Ultimately, it’s fine, but nothing to write home about. At first blush, it seems like a colossal waste of Yung’s talents, if only because I wouldn’t expect it to make it to a second season. It’s the kind of show that no one will remember two years from now, by which time hopefully Yung will have gone on to something better and more memorable.


← How to Win an Election (It's a Millennial Leftist President Y'All!) | Aaron Rodgers Admits 'Atlas Shrugged' on Shelf Was a Troll →