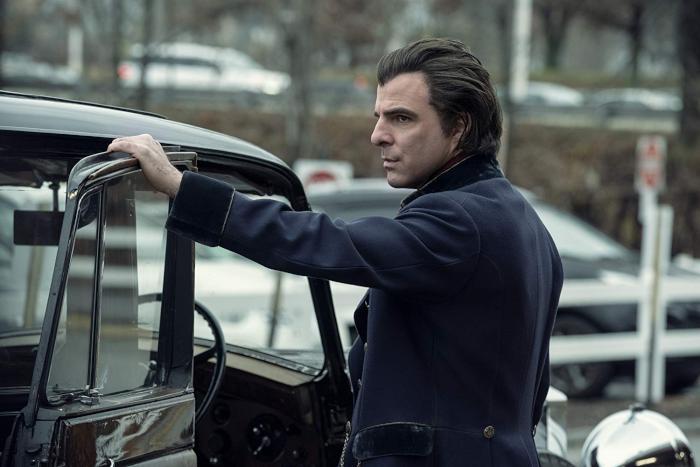 Review: AMC's 'NOS4A2' Has Created A Monster, But What Will It Do Next?

AMC’s fancy car-driving pseudo-vampire series, NOS4A2, wrapped up its first season last night with an explosive 2-hour finale designed to tie up a lot of threads — and leave a few more hanging. AMC has already announced that it has picked up the series for a second season, which is a bit of a relief for fans of Joe Hill’s novel. So far this adaptation has covered roughly a third of the book, and by the end of the finale even viewers who were unfamiliar with the source material could probably tell they were watching the first act of a much larger story. And, if I’m being honest, viewers might have gotten a deeper first act than readers did. Show-stopping set pieces from the book were faithfully recreated onscreen, but the human dynamics, the relationships and motivations of the characters, were altered in subtle and impactful ways that truly added up. The engine of the story is still there — a Christmas-obsessed kidnapper with a Rolls Royce facing off against a gifted young woman with the power to stop him — but it hums at a slightly different pitch now.

Some SPOILERS ahead for the full season…

I was surprised that the first season didn’t have more buzz, given the enticingly bizarre subject matter, but after seeing the season through to completion, it sort of made sense to me. For a show that promised a lot of weirdness, from razor-toothed kiddies to Zachary Quinto going full-creep, the reality is that most of the season was devoted to the rocky home-life of our protagonist, Vic McQueen (Ashleigh Cummings). Yes, she’s a teenager with a mysterious power that allows her to find lost objects by manifesting a bridge that will take her where she needs to go, but exploring her gift isn’t her main concern. Instead, she’s trying to figure out how to get into an art school — because she’s an artist, but also because she wants to get out of her dead-end town. She’s coping with the toxic relationship between her parents, whose marriage has finally collapsed and trying to reconcile the image of them she has in her head with the reality of them as people. Her father is an unreliable alcoholic who hits her mother, but he also believes in Vic and supports her dreams. Her mother is a hard worker who keeps the family afloat, but she’s scared of being alone — and does her best to keep Vic from pursuing her college ambitions. The show is an unexpectedly moving exploration of disappointment, resentment, why people stay and why they choose to walk away. Vic’s parents are broken, and both of them are trying yet failing Vic in key ways, and instead of coming into her powers Vic is busy accepting hard truths about the people she loves. So what if she can conjure a covered bridge to take her where she wants to go at will? That’s the least of her concerns, most of the time.

The show uses its nuanced domestic drama to throw the supernatural elements into stark relief, especially since Charlie Manx is not a man for nuance whatsoever. Manx (Quinto) steals children from neglectful parents and takes them to a Christmasland of his mind, where they will forever be happy little monsters — literally. The fact that he seems to sustain himself on, I dunno — their souls, or their negative feelings as they drain away in the backseat of his car? — is apparently beside the point. He is saving these kids from disappointing lives, and the fact that their newfound happiness comes from playing a sadistic game called “Scissors for the Drifter” doesn’t diminish the fact that they are happy, thanks to him. It also becomes clear that, had Manx noticed her early enough, Vic herself might have been a worthy candidate for saving. Instead, he steals a child close to her, which puts Vic on his trail. But the show’s focus on Vic’s relationship with her parents also underscores how narrow Manx’s judgement is. Her parents, just like the parents of the other kids he’s taken, aren’t evil. They’re imperfect. They could be better, but they also love their kids. They’re human. If adulthood is about learning to accept reality, then Manx never fully learned that trick.

Of course, he’s not really human either, or at least he isn’t anymore. But neither is he a demon, or a ghost, or even a vampire. He is a “strong creative” — which what Vic is as well. They are people who can punch holes straight through the fabric of reality and access a space that exists in their own minds (“inscapes”). That’s what Christmasland is, after all, or Vic’s Shorter Way Bridge. Strong creatives use objects to focus their talents and access their inscapes (Manx’s Rolls Royce Wraith, Vic’s bike, or the Scrabble tiles that Vic’s friend Maggie uses to divine answers) — but using their talent also comes with a cost. For Vic, it’s headaches and a single bloodshot eye. For Maggie, it’s an increasing stutter when she speaks. And for Manx? Well, presumably it’s his need to feed on the energy of the children he saves in order to stay young, and his mortal link to the Wraith. His inscape is far more developed — it even has a “Graveyard of What Might Be”, where kids he has yet to save are frozen in ice — in part because he appears to be a whole lot older than the other creatives the show has introduced. He’s been around longer, and if he’s less than human now it’s just that his talent has taken a far greater toll on him.

Part of what I appreciated about both the show and the novel was that the concept of Strong Creatives isn’t really explained with any more depth than what I sketched out above. They simply are, and the brilliance of resting the entire conceit on mental inscapes is that literally anything goes when it comes to the imagination. But the show also does a very good job of keeping us grounded in reality — in Vic’s reality, at least — and raising the stakes for her climactic confrontation with Manx. By building up Vic’s relationships with her parents and putting her college ambitions in the foreground, one of the biggest twists of the finale lands with an even harder punch: her pregnancy. Vic chased Manx all the way to Colorado in order to save her childhood best friend-turned-lover, Craig, only to lose her bike, her bridge, and Craig himself in the confrontation — and she finds out afterward that she’s carrying his child. For a moment, it seems like she may be doomed to repeat the mistakes of her parents, only solo this time… until a time jump reveals that instead of remaining in her home town, she’s decided to keep hunting for Christmasland with the help of Lou, the friendly biker who helped her face Manx.

And as for Manx? Vic managed to torch Wraith, thus stopping Manx in his tracks, but old cars were built tough and this one is hardly down for good. While a mechanic has set his sights on getting the Wraith up and running again, Manx himself seems to be emerging from his coma — and it’s clear that it’ll only be a matter of time before Charlie gets his car back. Vic may have won the battle, but she hasn’t won the war — and next time, Manx may be more interested in her child than he is in her.

NOS4A2 proved to be a surprisingly savvy adaptation of the source material, backed by strong performances from Quinto, Cummings, Jahkara Smith as Maggie and Ebon Moss-Bachrach as Vic’s father. But more importantly, I’m excited to see where it will go from here — both as a person who knows the book, and as a person who now trusts the show to deviate from the book in insightful ways. The ratings were reportedly pretty average for this season, but hopefully it picks up some steam once it’s available on streaming platforms and people have a chance to catch up. This season was a little slow, but I think it was all setting up something that’ll be worth the pay off. After all, Christmasland is still out there. Waiting.

← How British Political Comedy Show 'Have I Got News For You' Helped Pave the Way For Boris Johnson | Meghan McCain on Racist Trump Tweets: 'It Hurts Young Conservatives' →