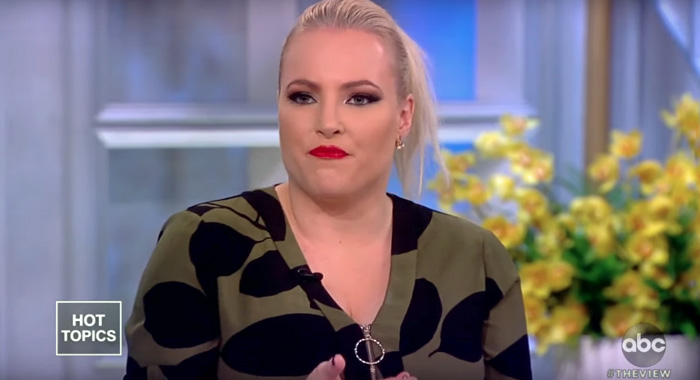 There’s a strange line in Meghan McCain’s mostly uneventful interview with Elle that stuck out like a sore thumb because the answer is glaringly obvious.

She cannot seem to decide whether she’s the victim or the independent, strong-willed maverick molded in her father’s image.

It’s the first part, by a goddamn country mile. But Meghan will never admit that even after giving a whole-ass interview where she claims The View audience boos her, everyone’s being way too mean about her constant Ilhan Omar attacks, and she was asleep when her husband called Seth Meyers a cuck. Nothing is Meghan’s fault. She’s just a rough, tough Republican straight-shooter — “John McCain in a dress,” her mom literally says — who doesn’t understand why bad things keep happening to her. It’s just not fair! But, oh by the way, the left are the whiny snowflakes.

What’s interesting is Meghan gave that interview to Elle back in May, and clearly, she spent zero time reflecting on her identity because Meghan’s mayo operandi has always been bursting into every topic like a white privilege Kool-Aid Man. Case in point: When she spent two separate episodes of The View making herself the victim of Donald Trump’s racism. His Twitter attack on The Squad? No one suffered more than Meghan. The “send them back” chant at a Trump rally three days later? John McCain’s daughter could’ve died, you guys.

So it’s not all surprising that Meghan has waded into the latest Elijah Cummings controversy by, once again, painting young conservatives as the real victim of Donald Trump’s racism. Won’t someone think of the white people?!

“As someone who is, I think, one of the three Republicans or conservatives on this entire network, I’m always concerned about the next generation coming up,” McCain said. [Yup, totally can’t figure out if she’s playing the victim. It’s a mystery. - Mike]

McCain said she was worried that Trump and his GOP apologists would give younger voters the wrong idea.

“Young people that are interested in conservative ideals only see this,” she said. “They only see race-baiting, and only the Trump administration, and what Republicans should be most concerned about right now, well, from my perspective, is what comes next, because we will be out of power. All politics is cyclical, and you’re going to have a bunch of millennials who think the entire Republican Party is — the person in charge, that thinks all communities of color are ‘infested.’”

I’m not even going to be cute right now because there are families who just wanted to go to a fair on a Sunday night in July — probably as wholesome and innocent an activity as it gets — and now they’re forced to bury a child because the NRA is so far up the Republican Party’s ass, it’s dangling an AR-15 out of its nose. To be even more blunt, there is blood on Meghan’s hands because dead children are an acceptable sacrifice for her right as an AMERICAN to get blitzed on Jell-O shots and fire guns with her redneck husband. So you’ll have to forgive me if I’m not in the mood to shed a tear for the party that’s turned every single moment into a potential warzone. Get f*cked.

On that note, Meghan is really showing her ass by acting like the Republican Party has been anything but a haven for racism since the moment it started peeling off Southern Dixiecrats. Donald Trump is as pure of a manifestation of the Republican Party as it gets, and Meghan should know this because she had goddamn front row seats for the rapid descent of the past decade. Sarah Palin was the grenade and MY FATHER© pulled the pin. It’s not like the GOP woke up one morning and went, “Oh no, Donald Trump tricked us into hating minorities!” The bigotry was always baked in. So either Meghan is being willfully obtuse, or she’s a moron who shouldn’t be commenting on anything. There’s only one endpoint for an ideology that says, “I got mine, f*ck you,” and we’re watching it in the form of concentration camps on U.S. soil.

As for young people leaving the GOP, is that even happening? I genuinely don’t know. Because I live in Trump Country, and there is no shortage of pickup trucks with shiny new Confederate Flag license plates peeling out of the local high school. That being said, I do want to address the absolute bullsh*t talking point that both parties are the same. If that were the case, the Democratic Party would be overflowing with Republicans who are tired of Trump. And yet that’s not happening because, surprise, there are huge fundamental differences between the two parties. Christ, in her Elle interview, Meghan speaks glowingly of Joe Biden, yet still can’t bring herself to vote for him because he might be soft on immigration and/or not cut enough taxes. Can’t have that! In a nutshell, Republicans want a gun-strewn, theocratic dystopia where the rich bleed the poor dry in every way possible, and the Democrats want the opposite of that. Unfortunately, we have our own Meghans on the left who want things NOW, so they sit at home on Election Day (or vote third party) then talk about how awesome #TheRevolution will be once we’re all dead. Solid plan.

Anyway, I just want to note that there’s an entire five-minute clip before the video below where Meghan says absolutely nothing during the Elijah Cummings topic, and when she does finally speak, it is literally everything I just blockquoted. “Won’t someone PLEASE think of the young white assholes who don’t like the racist stuff said out loud, but otherwise, are generally cool with it?” is Meghan’s sole galaxy-brained take. (Fun fact: It’s part of her contract that she gets to talk last so she can see what everyone else says first.) That’s what ABC wants to keep around? A bland block of nepotistic cheese who hasn’t met a racist topic she can’t make herself the victim of. If Meghan McCain was alive when MLK was assassinated, the first thing out of her mouth would be, “Well, this is going to ruin my salad at Panera later.” But I’m getting off-topic.

Your party is trash and anyone who wants to stay in it is trash, Meg.

← Finale Recap: Will 'NOS4A2' Return For A Second Season? | 'Euphoria' Recap: 'I'm Morgan F---ing Freeman and This is the Beginning of the Third Act' →