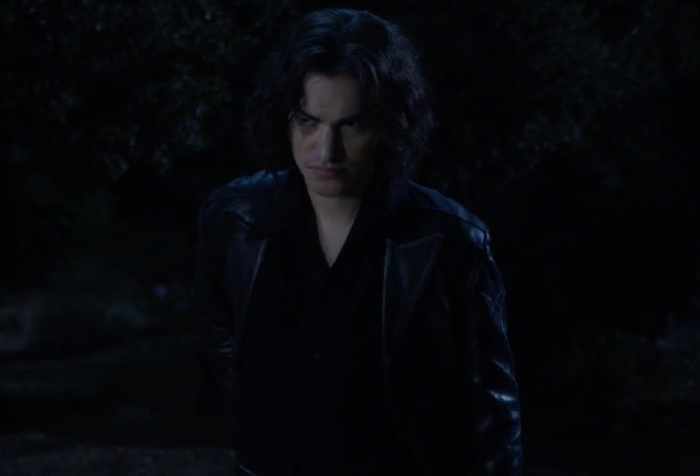 If you’ve been watching the newest season of American Horror Story, set in an empty summer camp in 1984, you may be wondering what real-life serial killer and all-around bad-guy Richard Ramirez has to do with any of this, and why he’s there. We’re here to set the record straight and separate fact from fiction, and probably more to the point, share how he was ultimately captured in real life because it’s a badass story.

AHS got his background right.

As much as we’d like to hope that Ramirez’s background was made up for the show, this part is spot on. Ramirez had a violent father that was prone to outbursts, and as a result, young Ramirez spent a lot of time with his older cousin, who had come back from Vietnam. A sadistic piece of s*it who deserves no sympathy, ever, he delighted in showing young Ramirez polaroid pictures of the women he raped, tortured, and murdered in Vietnam, and Ramirez was present when he ultimately shot and killed his wife, all of which was portrayed on AHS.

Ramirez’s wasn’t known as the Night Stalker in 1984.

AHS takes place in the summer of 1984 (most likely the end of July, since the Olympics are going on, and they went from Jul 28, 1984 - Aug 12, 1984.) However, Ramirez’s reign of terror as “the Night Stalker” is more tied to the spring and summer of 1985, when the vast majority of his murders take place. Contemporary to the show, Ramirez had only killed two people—and most likely hadn’t been given the nickname “the Night Stalker”—all sources I can find point to that nickname, which was first bestowed by the Los Angeles Herald Examiner, was given in 1985.

So, the show is not only taking liberties by having its characters call Ramirez “the Night Stalker” but even knowing who he is.

However, not much is known about Ramirez’s whereabouts the summer of 1984, so he could have spent it at an abandoned camp. I wouldn’t put money on that, though.

Ramirez was a Satanist.

Make no mistake, this guy was a monster. When he was sentenced to death in 1989 for 13 murders, he stated this, per CNN:

“I am beyond good and evil. I will be avenged. Lucifer dwells in us all.”

So the show gets his Satanist beliefs, right.

Did Ramirez have a girlfriend?

Believe it or not, he did very well for himself in prison because you can never underestimate how some people just aren’t right in the head. That said, I couldn’t find any trace of a girlfriend that Ramirez had, prior to his arrest and conviction for multiple murders, so the chances of him having a gal like Montana in his ear, telling him to kill are slim to none.

How he got caught.

Richard Ramirez was a bad guy (he died in 2013, due to lymphoma) who tortured, raped, and murdered his victims. He’s a gross piece of s*it and the world is better off without him, regardless of his fictional portrayal. That said, the way he got caught is so badass, I want to end the article with it.

By the end of the summer in 1985, the authorities finally got a lead on who the Night Stalker was, when Ramirez left a fingerprint on the rearview mirror of a stolen car and they were able to find him in the system for previous arrests. By then, he had booked it to Arizona on a bus to escape the heat in LA, where he had spent all summer raping and murdering women and a few men. Unable to stay away for long, he soon found himself back in Los Angeles, and when he stopped by a corner store in the downtown neighborhood of Skid Row, he saw his face plastered on the front page of the newspaper and he knew that it was the beginning of the end. Looking for a place to steal a car to get out of town, he made it to the neighborhood of Boyle Heights, 4 miles away. He tried multiple times to steal people’s cars (even hitting a woman in the process) and each time, he was thwarted by the community coming together and saying “f*ck you, not today,” with the cops hot on his tail (someone saw him acting funny and called him in, and then everyone kept calling him in.) When the cops finally found Ramirez that day, he was beaten to a bloody pulp, after the neighborhood had caught up to him first.

A LA Times editor at the time wrote:

“Ramirez was set upon not because he might be the Night Stalker but because he was a stranger in the neighborhood who hit a woman and tried to steal a car. You don’t do that….”

Chances are, that ending won’t make it to the show but I love how a community came together to f*ck up one of the most gruesome serial killers of all time because he was an outsider who was trying to harm its people. Hell yeah, Boyle Heights!