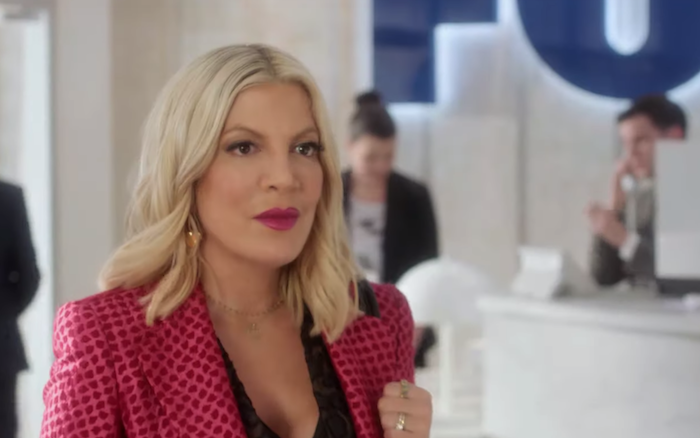 First off: I am happy to report that the pilot episode of BH90210 was not a fluke, as episode 2 was just as fun, quirky, meta, and entertaining as episode 1. It’s a relief—I love this reboot, and it’s a good show on its own merits (and not just for nostalgia’s sake) and it’s looking like the consistency is going to keep up, which is awesome!

Spoilers for episode 2, below. Turn back now if you don’t want to know what happened! Jim Walsh will be proud of your decision either way, though.

Anyway, what I’m really doing here is to run down what’s fact and what’s fiction for episode 2 of BH90210, including what’s the deal with Tori Spelling, and yes, the return of Emily Valentine!!

Let’s break it down by cast member:

Tori Spelling—Is she really a producer?

First, off, shout out to commenter MellieOleson—because she pointed out in the last post that Tori’s show husband was her co-star in the TV classic Mother May I Sleep With Danger? which I hope you’ve all seen, not because it’s the greatest title for a movie, made-for-TV or otherwise, but because, well, it is just for the title but it’s a great one, so I suggest it anyway.

Show-Tori’s big storyline was her coming into her own as a producer, which aligns with what real-Tori has been up to lately as well. You can check out her IMDB page, and while most of her producing credits are in regards to reality shows she participated in, it still counts!

Additionally, she is the producer of BH90210, which is getting meta, as she’s the show within a show’s producer as well.

Show-Jason would only do the reboot if he was allowed to direct the pilot, and friends? He’s directing the third episode of BH90210. (The pilot of BH90210 was directed by Elizabeth Allen Rosenbaum, which I’m sharing because I was wondering the same thing and looked it up.)

Of course, diehard 90210 fans already know that Priestley directed multiple episodes of the show during its original run, including the episode where Brenda runs away to Vegas to try to marry someone not named Dylan McKay.

So, Jennie Garth has three children in real life, while show Jennie seems to have only one—but art imitates life, here, as her teenage show-daughter wants to become an actress, while her real-life daughter, Luca Bella, has multiple credits to her name. So this is pretty similar.

Show-Gabrielle seemingly comes out to her husband as bisexual in this episode but as I covered in the last episode, there doesn’t seem to be a public statement out about Gabrielle’s sexuality, so, it’s not our business until she wants it to be our business (if), so this will have to remain unclear for now.

Other than a well-placed Sharknado poster Ian was holding during the courthouse meeting of the cast, most of Ian’s storyline revolved around product placement and brand synergy—mainly that his product lines would get shown on the reboot, and checking real-Ian’s website, yup. He’s got two lines, a skincare line (that goes to a dead link, as of publication) and I, believe, a men’s clothing line, that gets redirected from the brand’s website onto another brand’s page. Check it out for yourself, here.

Looks like real-Ian is all in on acting again. Speaking of which…

Other than the creepy kid who is stalking Brian (I kind of love this dumb storyline, because it’s exactly the type of multiple-episode arc the original 90210 was known for) Brian’s big thing is returning to acting, but anyone who watched Happy Endings knows, he never really went away. Not in our hearts, at least.

That said, real-Brian has a 3-year break in his filmography between 2014 and 2017, so it seems that there’s some overlap here, with show-Brian.

OK. Who else is loving how Shannen basically hasn’t had any scenes with the core cast yet? This could be due to filming schedules and availability, but it’s also keeping in line with the general consensus among basically everything, that there’s not a lot of love lost between her and the rest of the cast. That said, show-Shannen is BFFs with Show-Brian, so is there any truth to that?

I mean, maybe? This is what I could find on the two of them, per an interview with the Associated Press:

AP: Shannen Doherty signed on to the show later than the rest of you. Are you glad she decided to join?

Green: “To me, the show only worked if it was the original cast doing it and she was a huge part in what made the show what it was and so was Luke (Perry). You know, I always had this hope of, I knew he was busy doing Riverdale and that he wasn’t gonna be able to sign on and do the reboot, but I always had in the back of my mind that he would be able to come and at least do one and I always hoped, if nothing else that it would work out that way with Shan (Shannen Doherty) too where she would come and do one or two. So, it was really nice that she ended up signing on and doing all six. I think she was a big part of the show then and she’s a big part of the show now.”

Yes! Christine Elise (who, did you catch that look from Jason? They dated for a long time, in the ’90s. Awkward) is the show’s producer, and a quick check of Christine Elise’s IMDB verifies that yep, that’s accurate to life.

What about those dolls?

OK, friends, I have to mention it here. The dolls show-Tori was utilizing as stand-ins for getting the show-cast onto the reboot were not the dolls we had back in the day. At least not the ones I coveted (and had, let’s be honest. That line about hottest toy for Christmas in 1992 was spot on.) The real-life dolls were larger, and had synthetic hair to comb and style (for the ladies) and the Ken-esque plastic hair (the dudes.)

Well, that’s all I caught for this episode—what did you notice this ep? Any particularly good callbacks?

← YA Book Club: R.L Stine's 'Fear Street: Sunburn' AKA the Shark Attack One | Donald Trump Wants to Buy a Greenland for the United States →