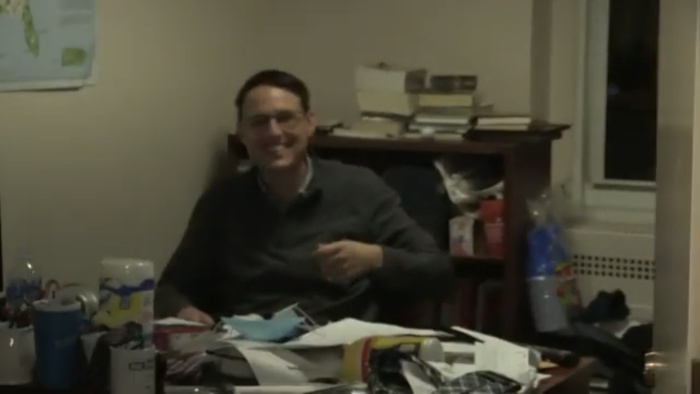 If you were following the election coverage last week then chances are you know who Steve Kornacki is. The MSNBC journalist and tv host became a source of memes throughout the week as he went over results for days. People were loving his coverage. One of those people is Jimmy Fallon.

Fallon decided this week to surprise Kornacki at his office (since they’re in the same building) and it was just the kind of joyful, sincere thing I wanted to see today. With a mask on his face and a pep in his step, Jimmy arrived at Kornacki’s office much to the journalist’s surprise!

That’s honestly my favorite part of the whole bit. I even made it the picture for this article (blurry though it may be). The look of genuine surprise and excitement on Steve Kornacki’s face made my damn day. He looks so happy! Y’all, if everything I write about could be Jimmy Fallon surprising genuinely happy people I think my blood pressure might go down.

After arriving at his messy office, Fallon then gifts Kornacki with a $5 Subway gift card and a mini bottle of Jack Daniels, safely handing them over at a distance. It’s a funny and sweet moment that is a huge relief following the week we just had. It’s the kind of thing that makes Jimmy so watchable to begin with. I loved it. Did I make that clear?… oh, I made it TOO clear?

← ICYMI: The Cold Open on 'Jeopardy' After the Passing of Alex Trebek | Reddit Asks the Question: 'What Will Never Be the Same Once the Pandemic Is Over?' →