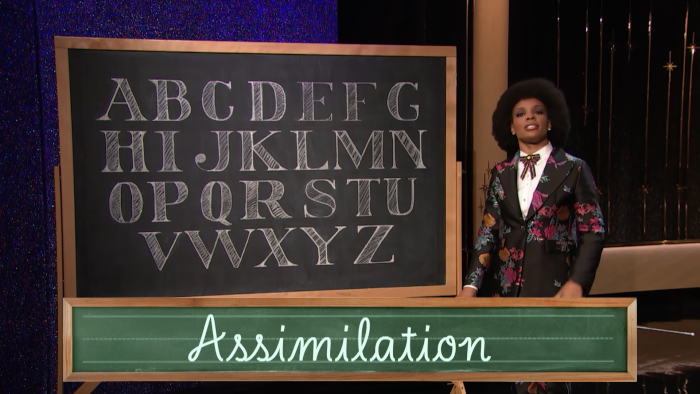 The Amber Ruffin Show is back! That should be reason enough to celebrate. The late-night talk show has become an absolute favorite. I was thrilled to see them return and even more thrilled that they did so with one of their funniest sketches.

White privilege is like seasoning salt; white people could make a lot of things better by acknowledging it, and yet they refuse! Instead, some places are actively fighting to not learn about white privilege and other forms of systemic racism. You know you’re in trouble as a country when a whole swath of people are using education as a boogeyman. Well, Amber Ruffin is here to make sure white people can’t treat their privilege like Bruno anymore (nailed it, I think, I still haven’t seen Encanto)!

If you think Amber doesn’t have an example of white privilege for every letter of the alphabet, then you are mostly wrong! She blasts through all 26 letters with a burst of hilarious determination. The bones of this sketch are hilarious, but it’s Amber who elevates it (and she of course gets some incredible assists from Tarik). Her timing, her inflection, everything. Amber Ruffin is a hilarious person, and this bit drives that home effortlessly.

I’d also be remiss if I didn’t mention the jokes in this sketch. One, in particular, referring to laws as “white people’s FUBU, written for us, by us” absolutely knocked me on my ass. Just smart, funny, truthful stuff.

Welcome back, The Amber Ruffin Show! We are all better when you’re around.


← The '1883' Season Finale Is Like a Country Song Specifically Written to Make Grown Men Weep | The Subpar 'Law & Order: Organized Crime' Is Getting a Much-Needed Shake-Up →